To test overclocked stability, we used the very demanding Gun Metal 2 — Benchmark 2, which pushes systems with its DX9 routines. To be considered stable for test purposes, Gun Metal, our Quake3 benchmark, UT2003 Demo, and Super PI had to complete without incident. Any of these 4, and in particular Super PI and Gun Metal, will crash a less-than stable memory configuration.


The new Corsair 4000 PRO performed significantly better than its rated 3-4-4-8 specification. In fact, at DDR400, it allowed the fastest timings we have seen with DDR500 memory, which is a remarkable accomplishment.

According to information provided by Corsair, the SPD on the XMS4000PRO modules sets the best timings for the memory speed settings. While the Corsair SPD settings at DDR500 and 539 provided performance that was similar to our tests, the Corsair timings for DDR400 were far too relaxed. For best performance at DDR400 to DDR450 range, you should manually set memory timings. 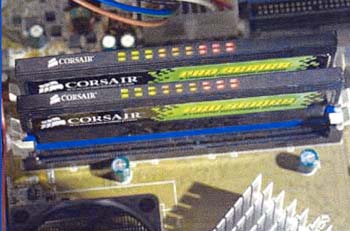 We do not know whose memory modules Corsair is using in these new 4000 PRO modules. The new cast aluminum heatsink is glued to the memory modules using thermal adhesive. There is also the added complexity of the top LED’s, which makes it very difficult to look at the memory chips without destroying the module. Corsair has not told us the chips used, and it appears they do not want end-users snooping at what many in the memory industry regard as trade secrets.