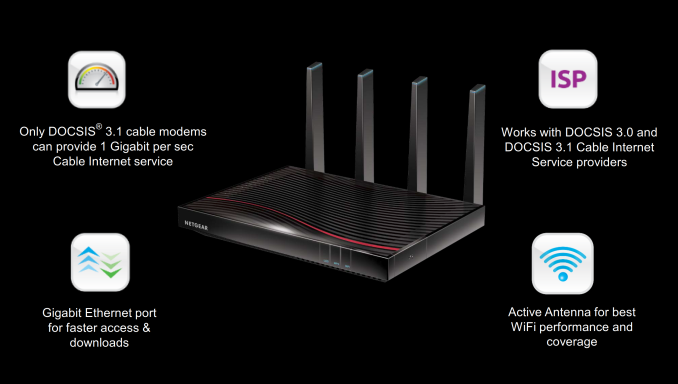 ​The 2017 CES saw various vendors introduce their first cable modem based on Broadcom's DOCSIS 3.1 BCM3390 chipset. Netgear's CM1000 was one of the first out of the gate, though it didn't come with future-proof features such as the dual Ethernet ports in the Linksys CM3132.

Today, Netgear is launching the C7800 cable modem router (being marketed under the Nighthawk X4S tag) based on the same platform as the CM1000. I won't go into the details of DOCSIS 3.1 and its advantages (already covered in the CM1000 launch article). The router and network processor segment is more interesting. Based on the AC3200 specifications, the C7800 appears to be heavily based on the Broadcom BCM93390 reference design (PDF) where the BCM3390 itself is the network processor with the integrated switch, and the Wi-Fi features enabled by the BCM4366 4x4 802.11ac Wave 2 radio. The BCM3390 integrates a 1.5 GHz dual-core processor. The BCM4366 has the proprietary QAM extensions to enable up to 550 Mbps for each 5 GHz spatial stream and up to 250 Mbps for each 2.4 GHz one (hence, the AC3200 tag). The CM1000, as mentioned earlier, is limited to 1 Gbps practically even if the ISP supports, say, 2 Gbps. However, the C7800's integrated switch ensures that the unit can support 1 Gbps+ speeds to the coax link (assuming ISP support) using just the wired LAN ports. 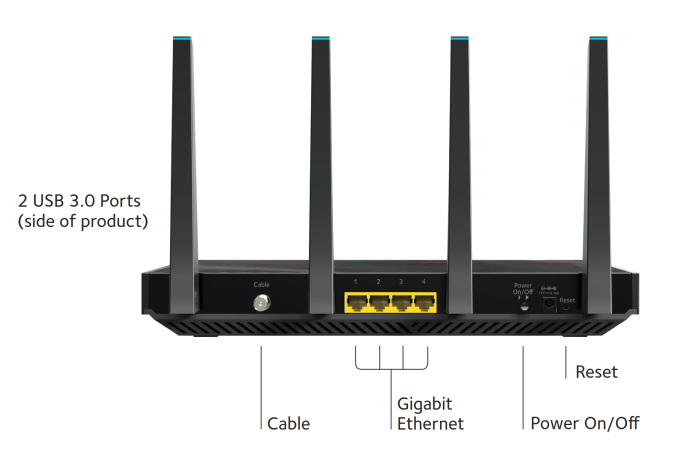 Netgear's differentiating aspects include the unique active antennae that moves some power amplifiers from the main board to the antennae in order to alleviate interference and simplify board design, while delivering better performance. Like other Netgear router products, the C7800 also supports the Netgear Genie app, ReadySHARE USB, and ReadySHARE Vault features . The ReadySHARE features enable a USB drive attached to the C7800 to act as a central backup destination.

The big growth in the Wi-Fi market has been in the area of whole-home Wi-Fi systems and mesh kits. For power users who need to make their Wi-Fi signals cover significant area, I would recommend a modem, a unified security gateway, a PoE switch, and a suitable number of Wi-Fi access points. However, such a solution is not for everybody. The most common configuration amongst people who don't use the cable ISP's supplied gateway is to use a discrete cable modem and a Wi-Fi router. This is logical, given that cable modem standards change at a much slower pace compared to Wi-Fi standards. The mesh kits also fit into that particular scenario. However, there are many cases (such as apartment units and relatively small houses) where a compact system that cuts down on the number of discrete units is preferable. Devices such as the C7800 target that market segment. The C7800 will be available for purchase this month, and will have a MSRP of $400.

In other Netgear product news, the Nighthawk X6S AC4000 router (R8000P) was launched late last month. This is an update to the first Broadcom 5G Wi-Fi product - the R8000 Nighthawk X6. Netgear's slide deck provides a helpful comparison between the two.

Netgear will continue to sell both units in the market. The Nighthawk X6S adopts a 64-bit Linux kernel, thanks to the use of the BCM4908 router SoC. The router is available for purchase on Amazon today.