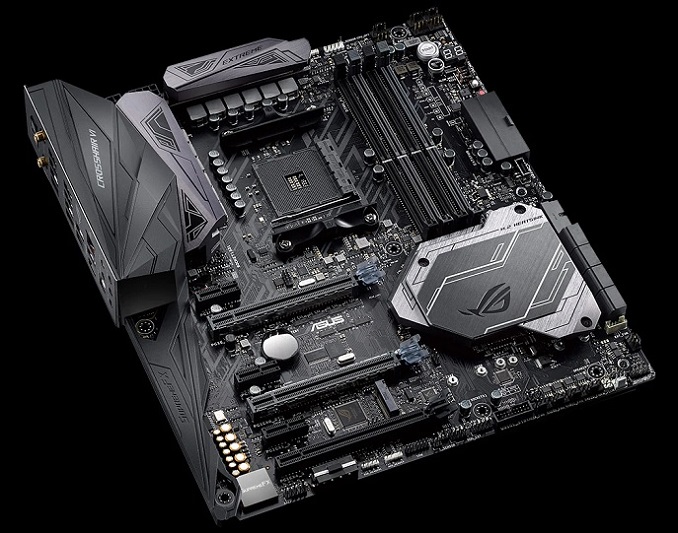 Most enthusiasts are familiar with ASUS’ Republic of Gamers (ROG) sub-brand bringing users what they state is an innovative lineup of products, promoted for performance and quality with gaming in mind. The ROG lineup has motherboards, graphic cards, laptops, desktops, monitors, even audio equipment, routers, and other peripherals. Today ASUS has announced in the US an addition to the AMD ROG family, the Crosshair VI Extreme Motherboard (C6E). The C6E is made on the AM4 platform using the flagship X370 chipset. According to ASUS, “...the ROG Crosshair VI Extreme is designed for gamers and power users looking to maximize AMD Ryzen performance”. 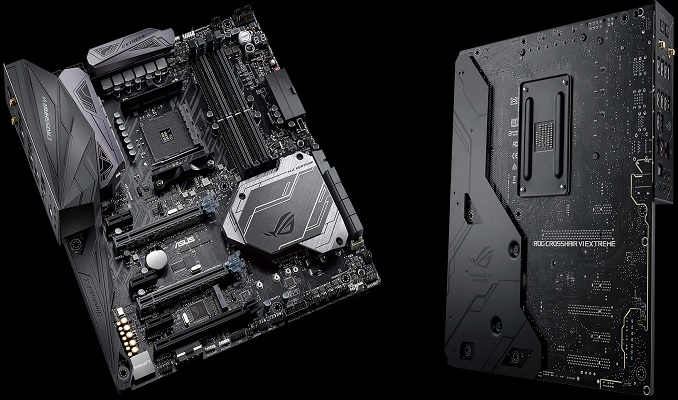 ASUS mentions ROG engineers worked on the board’s intelligent auto-tuner to improve one-click overclocking. For those new to overclocking, this means less hassle than manually tweaking multiple parameters to find a balance between a high overclock and having a stable system. Just click once, and the board should find a stable overclock. If one-click overclocking isn’t in the cards, and pushing the limits is the goal, the 12-phase VRM and plethora of overclocking features (dual bios, slow mode, LN2 mode, and voltage read points, to name a few) are also present.

Cooling an overclocked PC is an important factor as to how far one can safely push their machine. ASUS has partnered with Bitspower to produce a monoblock custom made for the Extreme (sold separately). The C6E uses a header on the board to monitor the Bitspower monoblock temperatures, flow rates, and also includes leak detection circuits. The board has other onboard connectors for keeping tabs on liquid temperatures and water flow at other points in the loop for users with their own thermistors. This data is managed by the FanXpert 4 software allowing consumers the ability to finely tune their cooling setup for performance, or silence as needed, across a total of 13 fan headers.

The Crosshair VI Extreme has the two full-length PCIe slots from the CPU using the ASUS Safeslot, which reinforces the PCIe bracket with a metal bracing for rigidity protection. With a nod to cooling, the dual full-length PCIe slots are spaced 3-slots apart giving two-slot coolers breathing room than with slots closer together. There is a third full-length slot on the board supporting a PCIe 3.0 x4 connection via the chipset which buyers can use for three-way CrossfireX using dual-slot video cards. 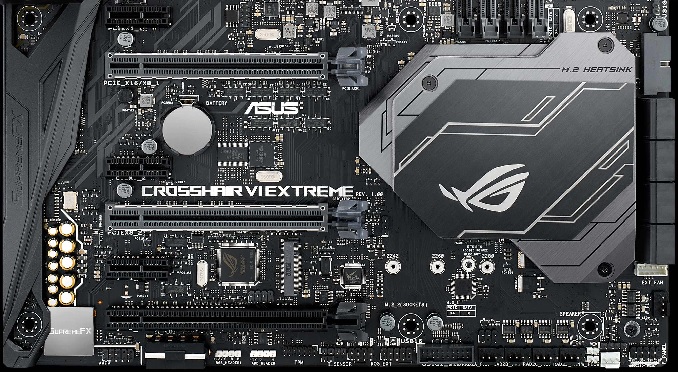 Looking at connectivity, the C6E has two USB 3.1 Gen2 (10 Gbps) ports on the rear, one Type-C and one Type-A, both from the chipset. It also has integrated Intel I211-AT gigabit Ethernet and an Intel AC 8265 as the 802.11ac module using a 2x2 antenna for Wi-Fi duties, as well as Bluetooth 4.1. There are a total of two M.2 ports - one uses the PCH/M.2 heatsink, and another which does not. For SATA, we see a total of eight ports. The back I/O plate is integrated and gives the board a clean look without having to install the I/O plate.

The C6E is using their latest SupremeFX banding, with an S1220 codec (based off the Realtek ALC1220) onboard audio. The actual IC is covered and protected from electromagnetic interference by the extended IO cover. The system contains an ESS Sabre DAC and “the usual assortment of engineering tweaks to improve the output and recording quality”, according to ASUS.

ASUS chose to use a monochromatic palette with a base color of black for the PCB with some stenciled in gray patterns, black and gray on the four DIMM slots, while the VRM cooling is mostly gray with some black highlights on it. The C6E will use its onboard LEDs (found on the I/O shroud, PCH, PCIe retention clips, and the right side of the board) and AURA Sync software to control the LEDs. If that isn’t enough, there is a header for addressable light strips allowing users to control each individual LED on the strip for even more lighting options. There are also two other onboard headers for standard LED strips. Another design feature aimed at aesthetics and overclockers is the right-angled 24-Pin ATX power connector. This change from vertical to lay flat against the board is said to allow for better cable routing in cases that have sufficient horizontal space.

The flagship ROG Crosshair VI Extreme can be found on store shelves starting in early August with an MSRP of $349.