Ryzen Mobile is Launched: AMD APUs for Laptops, with Vega and Updated Zen

Notice: All benchmark results on this page are from AMD's announcement and slide decks. We want to get a sample to prove these are accurate.

When manufacturers launch new products, they always have to provide a string of benchmark data points to back up the years of effort into building a new product. This data is almost always from their internal testing, but as they are in the business of promoting and selling the hardware, it is taken with a grain of salt until we can get our own hands on the product. AMD told us that their plan was to ‘under promise and over deliver’, citing that when Zen launched earlier this year, they promised a 40% gain in the base performance (instructions per clock, IPC) but ended up delivering a 52% gain.

For Ryzen Mobile, AMD said that they beat all their targets. Overall, they say that the new Ryzen Mobile parts offer up to 200% more CPU performance, up to 128% more GPU performance, and while consuming 58% less power than their previous generation products. 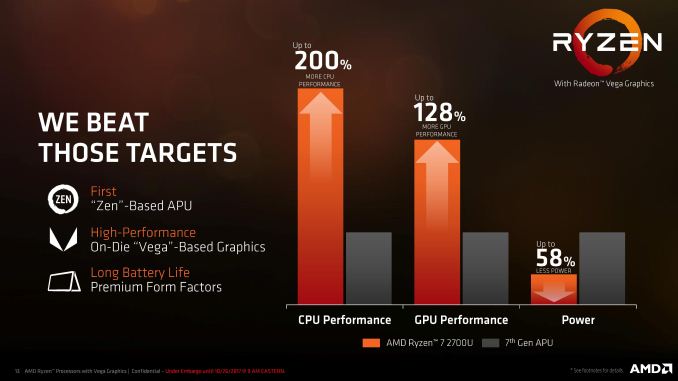 What they had promised, back at an earlier AMD Analyst day this year, was a 50/40/50 improvement.

Looking back at those numbers, it is clear that the 200% CPU gain comes from doubling the cores/threads (+100%) and increasing the IPC (+52% of ‘200%’ gives ~304%, or a +200% gain). This means that the +50% number given back at the Analyst Day was quite a way off, and presumably miscalculated given the base expectation of the IPC increase in the first place, let alone doubling the cores.

The GPU gains look like a better fit to AMD's earlier predictions, moving from 8 3rd Generation GCN compute units to 10 5th Generation Vega compute units. Even without the throughput improvements in graphics, that’s a base 25% increase in available hardware. The peak frequency moves up from 758 MHz to ~1300 MHz, which is a +70% increase as well. Together that accounts for a +112% increase in performance, leaving the base architecture design improvements to account for the remainder.

For power, AMD stated a 58% decrease in (total) power consumption from the previous generation and the new generation. This is listed as taking the total system level power consumption during the Cinebench R15 multithreaded test. The Ryzen 7 took 1594 joules while the FX-9800P took 3782 joules. 1594/3782 = 42% power, or a 58% reduction.

Combining the CPU performance and the power advantage, AMD is quoting a 270% performance per watt improvement for the new Ryzen 7 mobile parts. That’s an impressive number, any way to slice it.

For non-gaming performance metrics, AMD is quoting a series of numbers for some general purpose benchmarks as well as an interesting look at application launch speed. This seems very similar to our PDF Opening test that we’ve been running in our processor reviews. 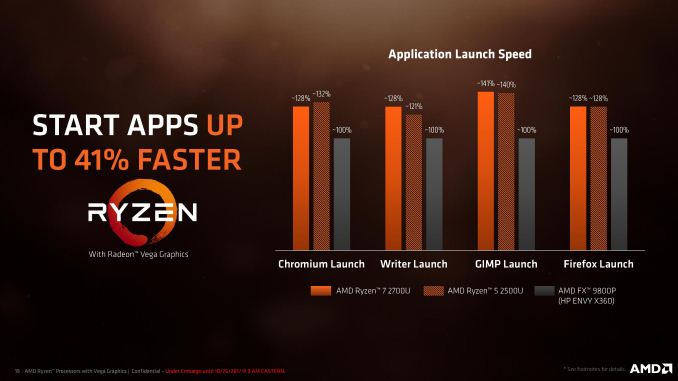 Overall AMD is stating that users can expect a 20-40% improvement in program launch speed using these four titles. This is different to AMD’s 52% IPC improvement figure on the basis of there is more to opening programs than just raw CPU performance – typically storage and memory, although both of those should be faster on the new platform than the old platform, leaving power as the reason between the difference. I would have expected AMD to offer some opening times for popular creator workloads here, such as video editing software or Photoshop, especially as that is one segment they expect they will target the hardware towards. 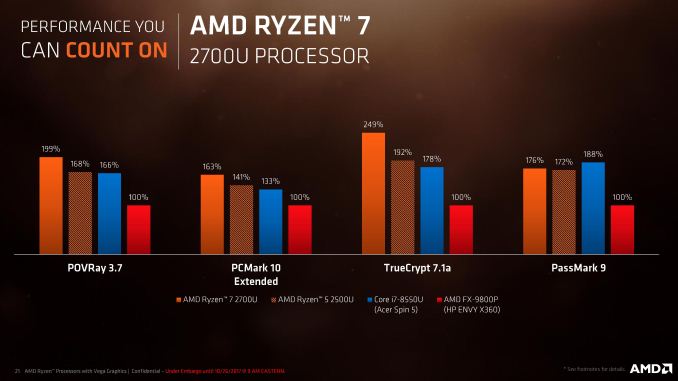 For the more system-wide benchmark tests, AMD gave data using POV-Ray, PCMark 10, TrueCrypt and Passmark. In every circumstance apart from PassMark, AMD shows that both of their Ryzen processors outperform Intel’s latest 8th Generation quad-core Kaby Lake-R processor, the i7-8550U, in the Acer Spin 5, as well as the previous generation FX-9800P (although the footnotes state that the 9800P was tested in single channel mode). In the footnotes AMD also lists data taken for the Core i5-8250U, but for some reason AMD didn’t put it in the graph. This gives the following data table:

So what is interesting here is that in each of the benchmarks, the Core i5 scored higher than the Core i7. The Core i7 was in an Acer Spin 5, whereas the Core i5 was in an Acer Swift 3. It is likely that the Swift 3 is a bulkier system capable of dissipating more energy, however it does mean that the Core i5 outperforms the Core i7 in all benchmarks, and it also outperforms the Ryzen 5 in all the benchmarks except TrueCrypt. It would be interesting to ponder why AMD left the Core i5 numbers out of the testing, especially as it puts the other data in such a bad light. It might be worth invoking Hanlon's Razor until we get a statement.

Overall, quad-core to quad-core, AMD is trying to promote that their CPUs offer better performance especially in compute intensive workloads. Interestingly enough, the area where I expected them to be good – PCMark 10 which needs both CPU and good OpenCL implementations – the benefits of Zen plus Vega were not as high as I expected. This is likely due to features such as Intel Speed Shift, and with the same data Intel would likely to ask to see performance per watt numbers for these tests, as well as battery life. 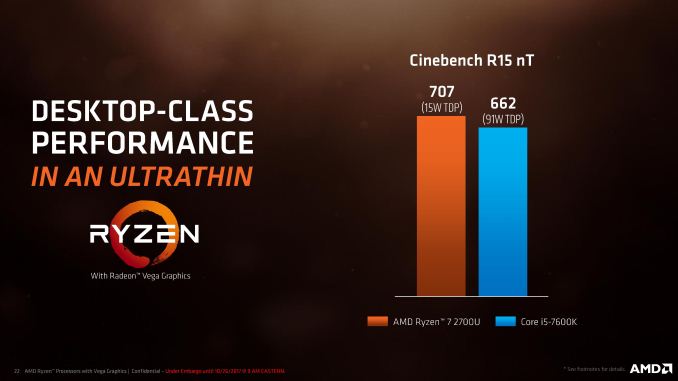 Here, AMD is claiming that its 15W, quad-core mobile processor, outperforms a 91W desktop processor at Cinebench R15 by almost 8%. The point AMD is trying to make is that previous users did not see AMD mobile processors as powerful. The score for the Core i5-7600K from AMD was 662 (in our review of the chip we got 656, so within the margin of error) for four cores and four threads, which is below the score of 707 for the Ryzen 7 2700U which also has four cores but has eight threads. If we look at processors from Intel that are 4C/8T, like the 35W Core i7-7700T, this scores 777 in our testing, which kind of drives away from AMD’s point here. AMD succeeds in touting that it has ‘desktop-class performance’ in a small power package, attempting to redefine its status as high performance. Part of me thinks at this level, it could be said that all the mobile processors in this range have ‘desktop-class performance’, so this is a case of AMD now catching up to the competition.

The main push behind AMD’s Carrizo and Bristol Ridge mobile processors in years previous was towards the gaming capabilities – being able to drive a good number of eSports titles at high frame rates without the need for a discrete graphics card. This made sense back then, even at the 35W TDP needed to drive a decent gaming experience, although it was let down by some design choices around single channel memory from the OEMs.

With Ryzen Mobile, the same message still applies, except that there is up to double the performance possible. This means either more frames per second or better image quality. 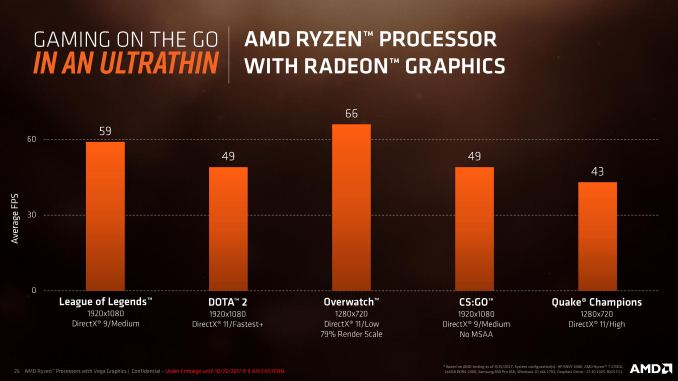 This data is listed as being taken from the HP Envy x360 system using the Ryzen 7 2700U with Vega 10 graphics and dual channel memory. There are no direct comparisons to previous platforms (unfortunately), but AMD is quoting nearly 60 FPS in League of Legends at 1080p at Medium settings, almost 50 FPS at DOTA2 (1080p, Fastest) and CS:GO (1080p, Medium).

Initially, these results did not seem that impressive – these are average frame rates, not 99th percentile frame rates, and getting 60 FPS with these settings seems a struggle, especially without comparison data to show it. AMD made a secondary point alongside this data: the Ryzen Mobile Vega 10 and Vega 8 graphics will support FreeSync 2 panels, especially in that 30-60 Hz range. With this performance and FreeSync/FreeSync 2 support, OEMs will have added incentive to produce gaming laptops with FreeSync capable panels at next to no extra cost, offering a better user experience. It’s a bold strategy Cotton; let’s see if it pays off. 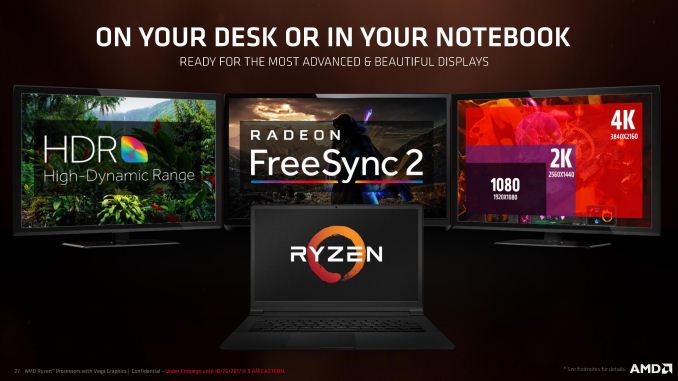