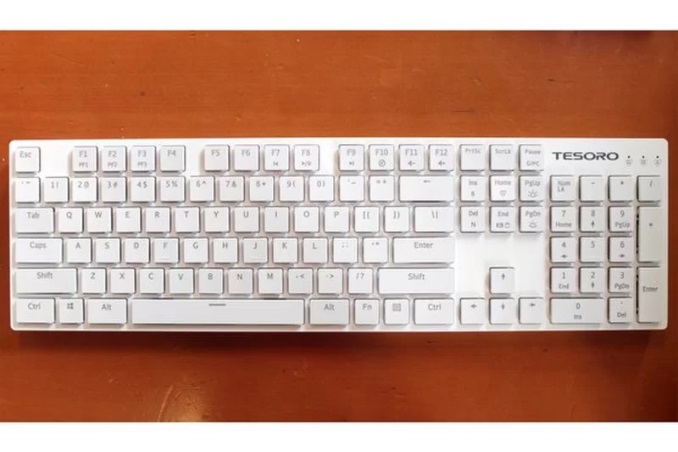 LAS VEGAS, NV -- Tesoro will readily admit that 2017 was a quiet year for the small peripherals company. The personnel reshifted and refocused during that time, carefully and fully revamping its products and approach to the market. We got a semi-exclusive look at what the company will be rolling out early in 2018: low-profile switch mechanical keyboards.

However, neither of the two new keyboard models we got hands-on time with sport the low-profile Kaihua switches we’ve been dissecting. Instead, one offers the new (TTC-made) Tesoro Slim Switch, and the other has Tesoro’s own (Kaihua-made) Agile low-profile switch. Both are supported by the company’s new Tesoro 360 configuration software.

The first new piece of Tesoro kit is the Gram XS, which was designed to offer all the gaming features one desires--mechanical switches, RGB lighting, and configuration software--but with a look that has a broader appeal than most gaming planks.

This was a conscious decision; during its yearlong refresh, the company researched who, exactly, is a “gamer” these days and discovered that there’s no one type: “Gamers” run the gamut of ages and genders, and increasingly, those people desire quality keyboards but have tastes as varied as their demographics. The Gram XS is white and slim but can also be colorful and fun with its backlighting; it wouldn’t be out of place in a visible location in a home, such as a living room or office. 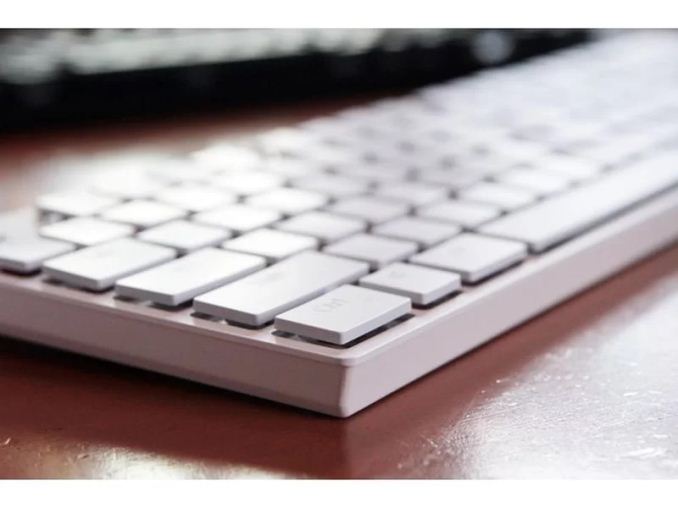 We recently spent some time with a pair of low-profile keyboards that have Kailh PG1335 switches on board, and we found that although they deliver a satisfying typing experience, they were missing just a little something when it came to gaming. We didn’t get a chance to game on the Gram XS, but we found the Tesoro Slim Red switches felt more robust at first touch. There’s a reason for that; Tesoro told us that its Red switch is actually heavier than its Blue one.

One distinct difference between the Gram XS and other low-profile keyboard options out there is the keycaps. Low-profile keyboards usually offer keycaps that have a similar profile to desktop caps, but just cut down, but the Gram XS actually has chiclet keycaps. This is a bit of a risk, because the caps have a bit of wobble, but in our brief hands-on time, we felt that they were no more (or hardly anymore) wobbly than a normal keycap. In any case, the chiclet caps enable an even slimmer overall profile than other thin keyboards. 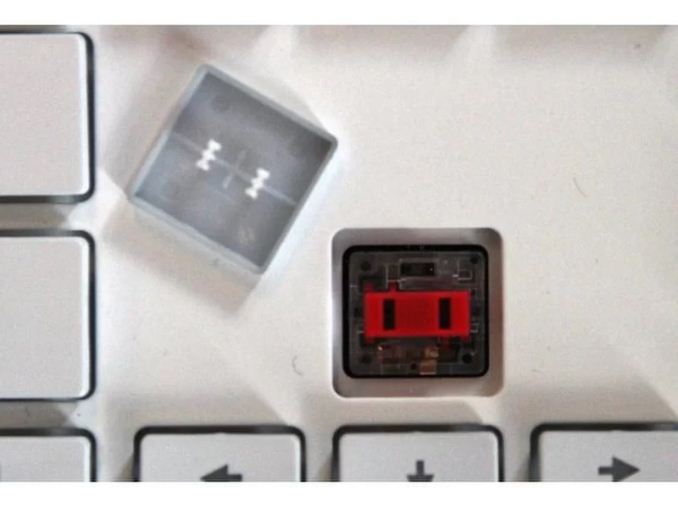 Some may remember that Tesoro has been experimenting with this form factor for a while now. We most recently saw a prototype at Computex 2017; you can see that Tesoro kept much of the same design.

When we popped off the spacebar to have a look at the stabilizers, we were surprised to instead find three switches. Simply, the spacebar has prongs in three locations that slot into the three switches. Obviously, the two flanking switches have no input, but it perhaps makes sense to offer a more true stabilization of the spacebar rather than traditional Costar-style or Cherry stabs. This also helps give some sturdiness to the otherwise rather flimsy spacebar. Indeed, if there’s a design flaw in the Gram XS, it’s the thin spacebar and the fact that when you press it, they cap ends up flush with the bezel, which feels a little odd under your thumb. 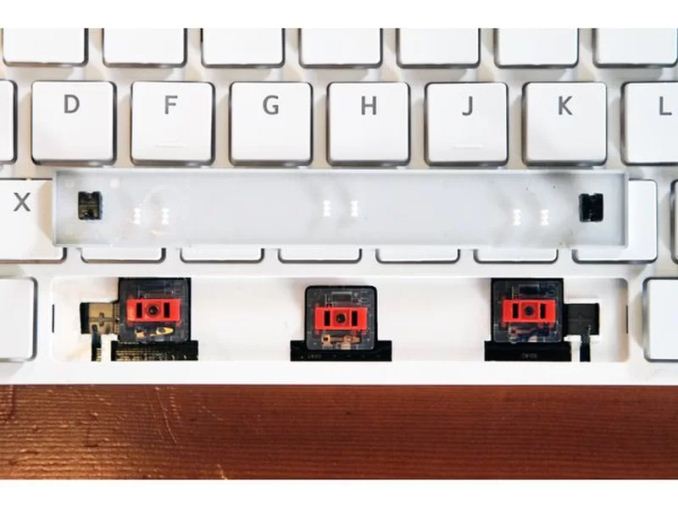 The second new entry into the Tesoro keyboard family is the Gram Spectrum TKL. Simply put, it’s a sawed-off version of the Gram Spectrum that was announced some time ago. It also has Tesoro’s Agile switch. Made by Kaihua (PG1280), the two Gram Spectrum keyboards are the only devices that have them. As we’ve discussed before, the Agile switch is something of a ‘tweener switch because it’s shallower than a regular desktop switch but deeper than, for example, the Tesoro Slim Switch. 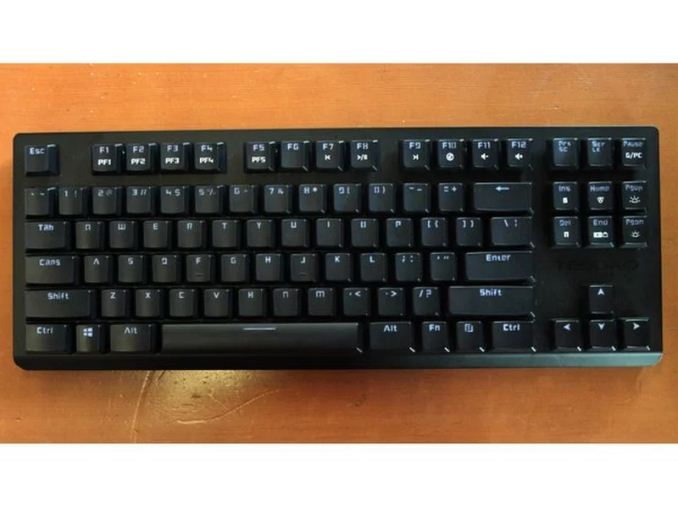 For now, it has Blue (clicky) switches, but Tesoro may branch out and employ a Red (linear) option at some point. Of further note are the keycaps, which are doubleshot. Tesoro is also planning to change the font to something a little more broadly palatable--as it’s done with the Gram XS.

Along with the new hardware comes refined software, which is called Tesoro 360. Tesoro wanted to create pleasing, clean user interface--one that matches the family-friendly look of the Gram XS--that still affords users plenty of configuration options. You’ll be able to perform all the usual actions--key assignments, macros, lighting, and so on. 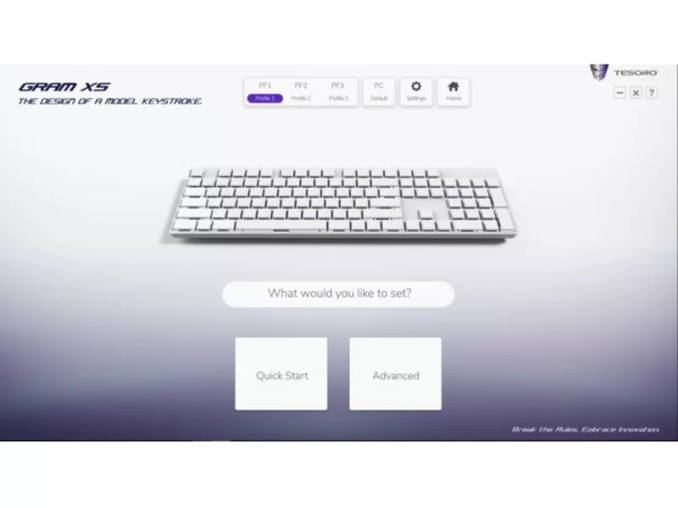 This is the beginning of Tesoro’s year; more products are coming. Tesoro is going to maintain two product families: the Gram series, which we’ve detailed above, and the Durandal line. The former is going to be the line where you’ll see the technologies and new ideas that Tesoro is working on, whereas the Durandal line is going to bear more traditional designs and will cost less. Expect to see some Cherry MX-equipped models, as well.

Seth Colaner contributed to this report