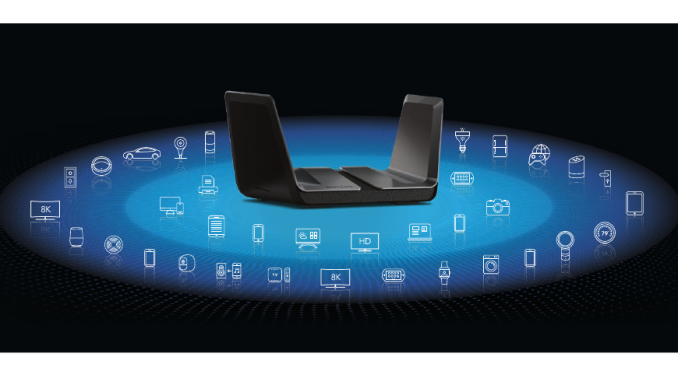 Netgear has announced imminent availability of their first 802.11ax router - the 8-stream Nighthawk RAX80, along with the technical details, pricing, and other information. In addition, they have also unveiled the 12-stream RAX120. While the RAX80 will be available for purchase this month, RAX120 will make it to retail in Q1 2019.

802.11ax has had an uphill adoption curve. Silicon vendors have been announcing draft-compliant chipsets since late 2016 (Quantenna - Q4 2016, Qualcomm - Q1 2017, Broadcom - Q3 2017, Marvell - Q4 2017, and Intel - Q1 2018). Device vendors were not far behind, with Asus going public about its plans to release a router (RT-AX88U) based on the Broadcom platform as early as September 2017. A year after the announcement, the RT-AX88U finally made it to retail at a $350 price point. D-Link also gave a sneak peek into their AX6000 and AX11000 routers based on the Broadcom chipset at the 2018 CES.  In the meanwhile, we have had deployments of the Qualcomm chipset in the carrier gateways from KDDI and NEC in Asia, as well as enterprise access points from Huawei and Ruckus Wireless.

Netgear had hinted at their 802.11ax product stack in their 2018 Analyst Day presentation. Today's launch provides concrete details of their first-generation 802.11ax products.

The benefits of 802.11ax have been brought out in multiple articles before, but, a recap of the major improvements is in order:

It must be noted that the aim of 802.11ax is not to target peak data-rates, but, improve the aggregate performance over several simultaneously active clients. The OFDMA-enabled simultaneous transmission to several users results in increased efficiency. Thanks to the lowered waiting time, the battery life of client devices also increases.

The first 802.11ax product to ship from Netgear will be the Nighthawk RAX80 AX6000 router based on the Broadcom BCM49408 SoC with two 802.11ax radios - the BCM43684. The BCM49408 has a 1.8 GHz quad-core ARMv8 processor (Cortex A53) supplemented by a 800 MHz network packet co-processor that keeps the main CPU free for other tasks. The radios are in a 4x4:4 configuration, with one dedicated to 2.4 GHz duties (bgn+ax, with 40 MHz channels for 1150 Mbps of theoretical throughput), and another dedicated to the 5 GHz channel (an+ac+ax, with 160 MHz channel support for 4800 Mbps of theoretical throughput). The 8-stream configuration puts the Nighthawk RAX80 in the AX6000 class.

There are a few aspects that differentiate the RAX80 and the RAX120:

The RAX80 and RAX120 differentiate themselves from the other 802.11ax routers announced so far by opting for a very different industrial design. Instead of going with the traditional antennae, the routers comes with a couple of 'wings' in which the antennae are hidden. With pre-positioning for optimal performance, and wall-mount capability for the unit, Netgear claims that the routers can fit practically anywhere to deliver high-end Wi-Fi performance.

Antennae Placement for the RAX120 (RAX80 is similar, except for the number of hidden antennae)

The RAX80 comes with 5x GbE LAN ports and 1x GbE WAN port, along with a couple of USB 3.0 ports.The RAX80 allows for link-aggregation across its LAN ports, and also between the WAN and one of the LAN ports. The latter allows for full compatibility with upcoming multi-gigabit Internet uplinks, though Netgear currently does not have any modems with dual LAN ports supporting link aggregation. 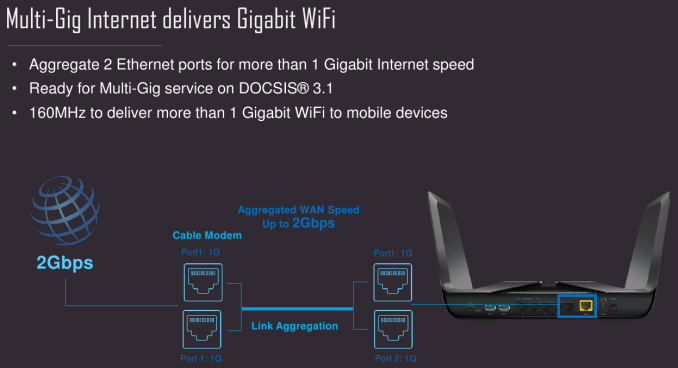 The RAX120 comes with (4x 1Gbps + 1x 5Gbps) LAN and a 1Gbps WAN port. Just like the RAX80, the router also sports a couple of USB 3.0 ports. Link aggregation is supported on two of the 1Gbps LAN ports. Netgear is marketing the NBASE-T connection as a flexible multi-gig port. 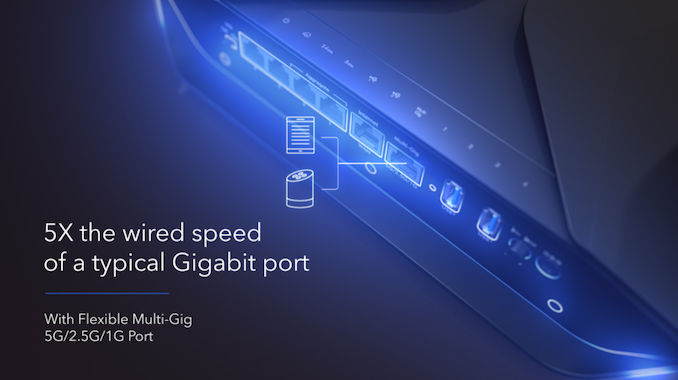 The absence of 802.11ax clients has definitely held back the adoption of 802.11ax a bit. However, Netgear was quick to stress that the new routers would enable even advanced 802.11ac clients with Wave 2 features to benefit. The RAX80 supports 160 MHz-wide channels and is also DFS (dynamic frequency selection) certified out of the box. Thanks to the non-availability of a contiguous 160 MHz wide-channel in the permitted operation spectrum, DFS support is absolutely essential if the full advantage of such wide channels is to be realized. 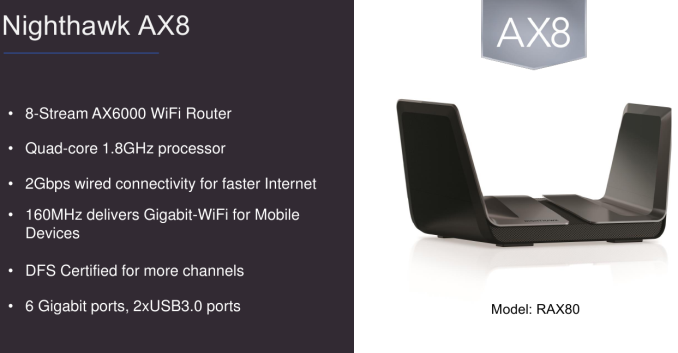 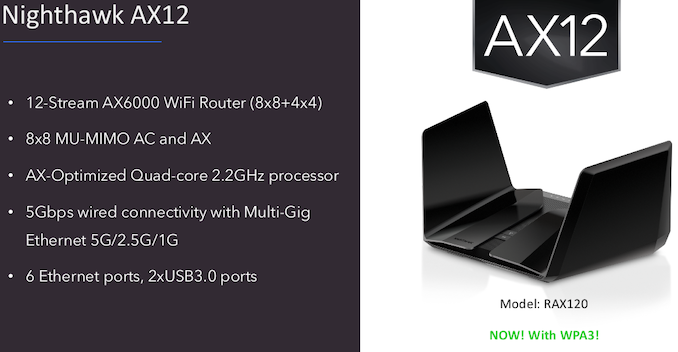 Even though both routers are in the AX6000 class, the availability of more spatial streams in the RAX120 is helpful when we have a large number of clients that are simultaneously active. On the other hand, DFS and 160 MHz channels support out of the box should help provide better peak rates for single clients capable of supporting that configuration. NBASE-T support in the AX12 gives it a slight edge compared to the link-aggregation routine that is not straightforward for the average consumer. However, the firmware status for the AX12 seems fairly fluid, and its launch is also a few months away. For the 2018 holiday season, it appears that Netgear is putting its bets on the AX8 as its flagship router.

The Nighthawk RAX80 is priced at $400, and is available for pre-order now (with shipping date set to late December 2018). Netgear did not provide any pricing information for the RAX120 that will make it to retail in Q1 2019. [Update: Netgear has a new subscription-based 'Wi-Fi as a Service' program that is launching with the AX12. Apparently, it is a beta-testing program that allows users to pay for the hardware after 90 days, assuming they are satisfied with the router.]