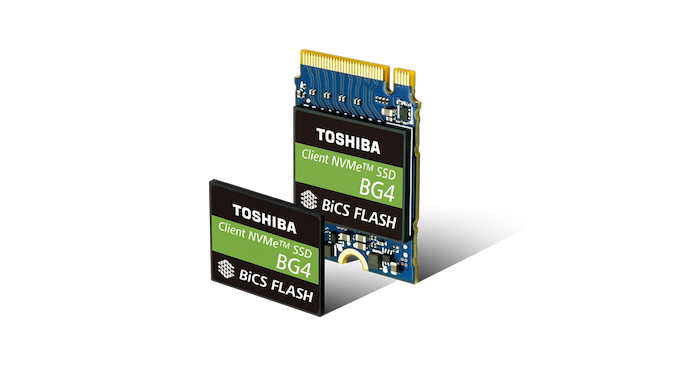 Toshiba has announced the fourth iteration of their OEM client NVMe SSD that is delivered as a single BGA chip package containing both the SSD controller and the NAND flash memory. The Toshiba BG4 is a significant upgrade over the BG3: Toshiba's new 96-layer 3D TLC replaces their 64-layer NAND, allowing for higher capacities and lower power consumption. The PCIe 3 x2 controller used in the BG2 and BG3 is replaced by a new controller supporting PCIe 3 x4, opening the door to much higher sequential I/O performance.

The BG4 is still a DRAMless SSD that relies on the NVMe Host Memory Buffer (HMB) feature to mitigate the performance penalties that a DRAMless drive otherwise suffers from. Toshiba has enhanced their use of HMB with the addition of parity checking for data the SSD stores in host DRAM, providing an extra layer of data protection even when the host system does not use ECC memory. The BG4's firmware has also been tweaked to expand the range of user data mapping information that can be cached in the host memory buffer, improving performance for use cases like copying large files. These changes mean that the BG4 will ask to use a larger chunk of host memory to accelerate its operation, but the requested HMB size is still less than 100MB. Other firmware changes have focused on improving random I/O performance and reducing the impact of background flash management on interactive performance. Preliminary performance numbers from Toshiba indicate that random write performance has almost doubled, and random read performance is well over twice as fast as the BG3.

The change to a wider PCIe x4 host interface does not require the BG4 to adopt a larger BGA package size than its predecessors, but the version that is mounted on a removable M.2 2230 card now uses type-M keying instead of the B+M keying typically used for M.2 SATA and PCIe x2 SSDs. The switch to 96L 3D TLC with a higher per-die capacity has allowed some drive capacities to be thinner (1.3mm vs 1.5mm for the 512GB model), and has allowed a 1TB model to be introduced to the BG series for the first time. Toshiba was the first to ship SSDs with 96L NAND with last year's XG6 high-end NVMe SSD, and it looks like the BG4 will be the second 96L SSD to start shipping. 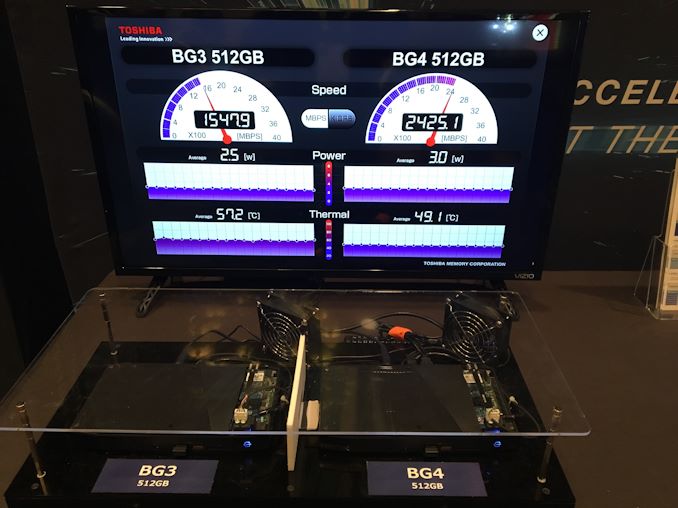 Toshiba's BG series has always been an entry-level NVMe SSD product for the OEM market, so it has largely escaped attention from consumers. Even the BG3's retail derivative Toshiba RC100 failed to have much impact due to a combination of higher than SATA prices, limited availability, and strong competition from the cheapest high-end NVMe SSDs that have overshadowed all attempts to establish a low-end NVMe market segment. However, the BG series has been growing in popularity with OEMs as an attractive alternative to small and slow eMMC for ultra-mobile devices. More recently, the BG3 has even been used in desktop systems as one of the cheapest ways for OEMs to be able to advertise NVMe storage. The BG4 is likely to see even broader adoption thanks to the higher performance, wider capacity range, and pricing that Toshiba says will be directly competing against SATA SSDs.

The Toshiba BG4 is currently sampling to select OEMs for qualification. Toshiba expects to provide review samples around the end of Q1, along with broader availability in Q2. A retail version has not been announced, but the BG4 seems positioned to fare better in the retail market than the BG3-based RC100, so we would not be surprised to see an RC200 by the end of the year.