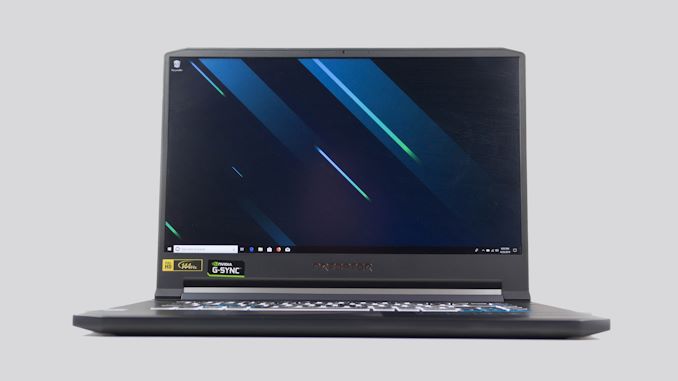 Gaming laptops continue to be a bright spot in the PC market, and practically every manufacturer offers some sort of system targeted at gamers. Some of them more successfully target the market than others, offering features that improve gameplay and visuals, and others focus more on what I’ll politely call the “gaming laptop aesthetic” which includes a myriad of multi-colored LEDs, and generally angular design cues. Diving head-first into that subject, today we're taking a look at Acer's gaming-focused Predator Triton 500 laptop. Although Acer has touched on a couple of the aesthetic design choices, they’ve kept it subtle, and still offer all of the accoutrements expected in a premium gaming laptop design.

There are two schools of thought for gaming laptops: either you want to be able to move it around, or you don’t. Acer’s Predator Triton 500 is in the former camp, offering an incredibly powerful system, in a thin and light form factor. Thin and light is of course relative, but true desktop replacement laptops can easily tip the scales over ten pounds, making them transportable, but not really portable. Acer’s Triton 500 offers a much more sleek design in its 15.6-inch frame, and weighs in at 4.64 lbs, meaning it really is a laptop you can easily take on the road. 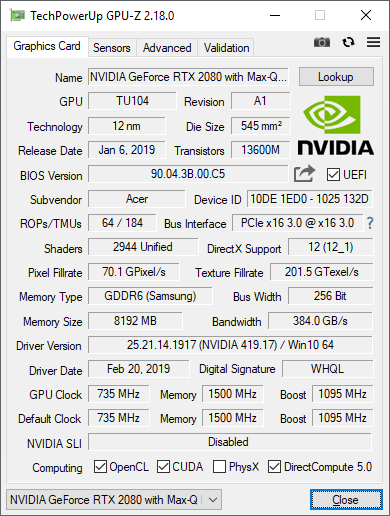 That thin design doesn’t preclude the Triton 500 from offering the latest high-performance silicon inside either. The Predator Triton 500 comes with the hex-core Intel Core i7-8750H, boasting a boost frequency of 4.1 GHz, and either a NVIDIA GeForce RTX 2060 video card, or the highest performance single video available in a laptop, the GeForce RTX 2080 Max-Q. This is the exact same Turing-based TU104 found in the desktop GeForce RTX 2080, just clocked down a bit and binned for power. Acer sent us the top model PT515-51-765U for review, featuring the RTX 2080, 32 GB of RAM, and 1 TB of SSD storage.

One of the biggest changes in gaming laptops over the last couple of years has been the introduction of variable refresh displays, namely G-SYNC, and that has been a tremendous help smoothing out the performance from laptop-class GPUs. The new trend is for higher refresh rates, coupled with G-SYNC, and here Acer delivers. Not only is this 15.6-inch panel a G-SYNC display, but it offers a 144 Hz refresh rate, and rather than move to a twisted nematic (TN) transistor layout, Acer is offering an In-Plane Switching (IPS) display, meaning it still offers the exceptional viewing angles that we’ve become accustomed to on quality laptops.

Acer powers the networking with Killer’s DoubleShot Pro, which means you can team up Killer’s Gigabit Ethernet with the Killer Wireless-AC 1550 adapter. I’ll dig into this more in the wireless section, but this is one of the gaming laptop choices which target a demographic rather than actual performance.

There’s plenty of I/O available, with three USB 3.0 Type-A ports, and a USB Type-C port which offers Thunderbolt 3 connectivity. For video output, there’s not only DisplayPort but HDMI native, which is a nice touch.

Acer’s Predator Triton is near the top-end of Acer’s Predator product stack, with the good gaming bits inside, but first let’s take a look at the design and build quality.