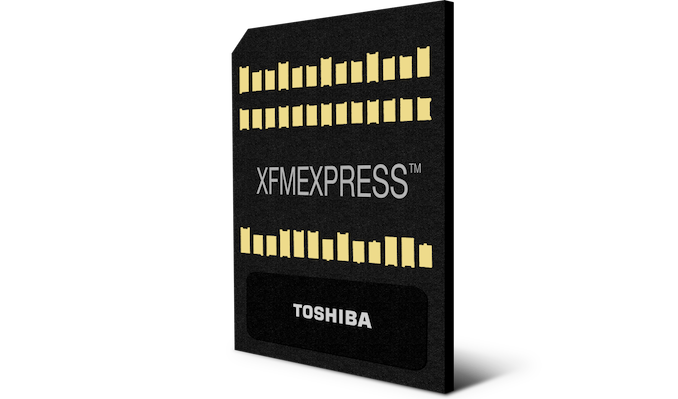 Today at Flash Memory Summit, Toshiba is debuting a new form factor for NVMe SSDs that is small enough to be a removable alternative to soldered-down BGA SSDs. The new XFMEXPRESS form factor allows for two or four PCIe lanes while taking up much less space than even the smallest M.2 22x30mm card size. The XFMEXPRESS card size is 18x14x1.4mm, slightly larger and thicker than a microSD card. It mounts into a latching socket that increases the footprint up to 22.2x17.75x2.2mm. For comparison, the standard sizes for BGA SSDs are 11.5x13mm with a PCIe x2 interface or 16x20mm with a PCIe x4 interface.

XFMEXPRESS is intended to bring the benefits of replaceable storage to devices that would normally be stuck with soldered BGA SSDs or eMMC and UFS modules. For consumer devices this opens the way for aftermarket capacity upgrades, and for embedded devices that need to be serviceable this can permit smaller overall dimensions. Device manufacturers also get a bit of supply chain flexibility since storage capacity can be adjusted later in the assembly process. XFMEXPRESS is not intended to be used as an externally-accessible slot like SD cards; swapping out an XFMEXPRESS SSD will require opening up the case of the device it's installed in, though unlike M.2 SSDs the XFMEXPRESS socket and retention mechanism itself is tool-less. 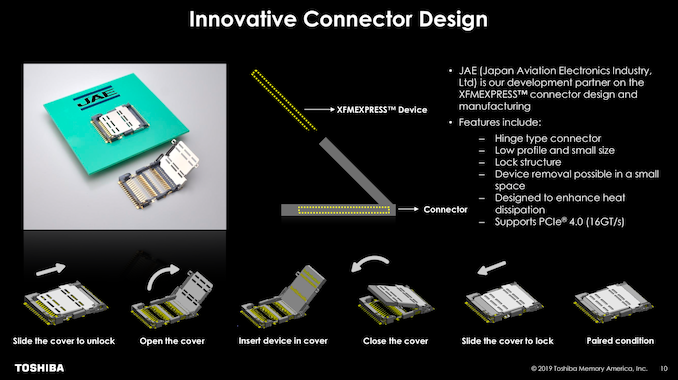