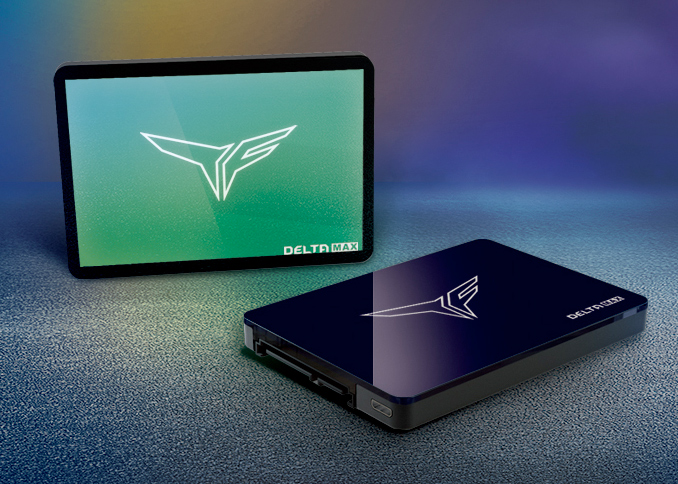 RGB LEDs are used for thousands of enthusiast-class products these days, so in many cases manufacturers compete against each other in terms of style and try to make their devices look better than their rivals. Team Group this week introduced its T-Force Delta Max RGB SSD that features an addressable RGB LED module which covers its entire top surface making the device look like no other product on the market.

Team Group’s T-Force Delta Max RGB SSD comes in a 2.5-inch/9.5-mm SATA form-factor. Set to be available in 250 GB, 500 GB, 1 TB, and 2 TB versions, the SSD is based on Silicon Motions's SM2258 controller paired with Micron's 64-layer or 96-layer 3D TLC NAND memory. From performance point of view, we are dealing with fairly standard mainstream SATA drives: the SSD is rated for up to 560/510 MB/s sequential read/write speed as well as up to 90K/80K random read/write IOPS.

True to its name, the SSD features an oversized addressable RGB LED module on top that features built-in rainbow color water flowing lighting effect and can be controlled using software from leading motherboard manufacturers. The product has a 9-pin USB header for built-in lighting effect as well as a 4-pin 5V header for controls using appropriate apps.

The RGB LED module naturally takes space, which is why the T-Force Delta Max RGB is 2.5 mm thicker than most 2.5-inch SSDs available on the market today (which are 7 mm thick). Considering the fact that the drive is aimed at desktop enthusiasts, it is unlikely that it will be bought to use inside mobile PCs. Nonetheless, one should keep this peculiarity in mind.