In every motherboard generation on AMD's AM4 socket, we have seen a premium motherboard chipset and a more budget friendly chipset play out in the market. For the latest generation, focusing on Ryzen 3000 processors, we only have the X570 chipset in the market right now, and we're expecting to see a B550 chipset and motherboards built on that chipset at somepoint in the future. B550 hasn't been announced yet, but one avid Reddit user has spotted an OEM system built on the B550A chipset in stores. The existance of B550A has been verified by an AMD employee.

AMD’s B550A chipset belongs to the company’s Promontory-LP family (B450) and therefore supports 2+4 PCIe Gen 3 lanes, two USB 3.2 Gen 2 links, and six USB 2.0 connectors. The chipset is supposed to support overclocking, but since it is only available to OEMs, it is up to them to support the feature. The key capabilty of the B550A is that is has been validated to support AMD's Ryzen 3000 desktop processors.

One of the interesting things to note here is that AMD’s B550 chipset has not been announced yet. In fact, the existence of the B550A was confirmed by an AMD employee in a Reddit comment. It was confirmed that B550A is an OEM version of one of AMD's chipsets based on that Promontory-LP hardware. It is unknown at this point if B550 will act more like B550A, or rather like X570. 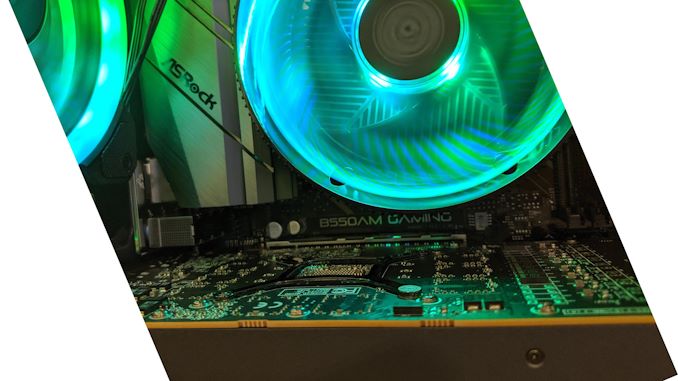 In the meantime, there a couple of words to say about OEMs and rebrands. One of the interesting things about big PC makers is that they demand product refreshes from their suppliers every year, which is why we see rebrandings of previously released products particularly in case of GPUs. To that end, the quiet introduction of AMD’s B550A chipset is not especially unusual, as it seems to only be OEM-bound. If nothing else, issuing a newer Promontory-class chipset for AMD's Ryzen 3000 CPUs gives OEMs another option for building reasonably-priced PCs powered by the latest processors.

Here is what AMD’s Robert Hallock had to say:

“It has a B550A motherboard. This is a version of the PCIe Gen 3 ‘Promontory-LP’ (e.g., X470, B450) chipset specifically for use in pre-built systems (e.g. OEM customers). […] OEMs are customers, too, and they may have different needs and wants than a DIYer. Not every product decision is considered through the lens of a channel product.”