With Intel's new Cascade Lake-X HEDT processors coming soon, ASRock has announced three new motherboards - the Steel Legend, the Creator, and the Taichi CLX. The trio is spearheaded by the high-end X299 Creator which is focused on content creators with features such as an Aquantia 10 gigabit Ethernet controller, Intel's Wi-Fi 6, three PCIe 3.0 x4 M.2 slots, and a whopping 10 SATA ports. The ASRock X299 Creator also has an Intel Thunderbolt 3 chip for with 40 Gbps Type-C connectivity.

Starting out with the ASRock X299 Steel Legend, it has four full-length PCIe 3.0 slots which run at x16/x4/x16/x8, with a single PCIe 3.0 x1 slot. Storage capabilities consist of two PCIe 3.0 x4 M.2 slots which also support SATA drives, with a total of eight SATA ports with support for RAID 0, 1, 5 and 10 arrays. Each M.2 slot includes an M.2 heatshield to keep hot running NVMe SSDs cool. The eight memory slots allow users to use up to DDR4-4200 with a total supported capacity of up to 256 GB. 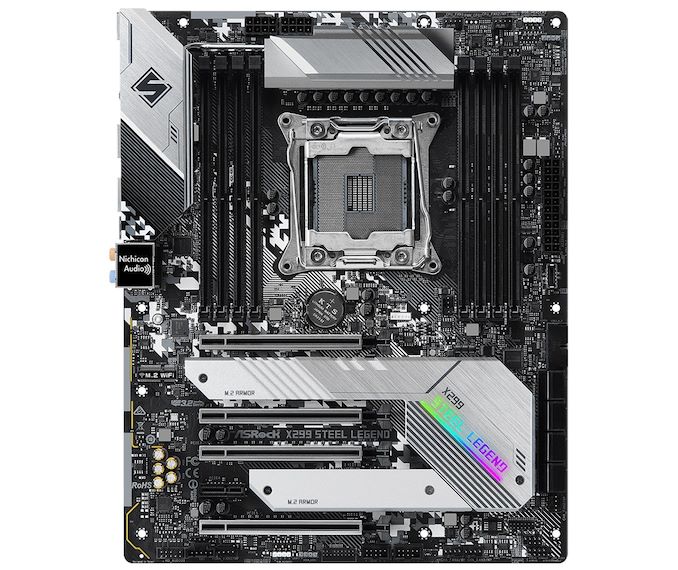 For the networking is a pair of Ethernet ports on the rear panel, one powered by an Intel I219 V, and the other by an Intel I211-AT Gigabit controller. Also on the rear panel is two USB 3.2 G2 20 Gbps Type-C ports from an ASMedia ASM3242 controller, three USB 3.1 G1 Type-A, and four USB 2.0 ports. The audio is powered by a Realtek ALC1220 HD audio codec which controls the five 3.5 mm audio jacks and S/PDIF optical output. The aesthetic also follows previous ASRock Steel Legend models with a silver and grey design, with RGB LEDs integrated into the X570 chipset heatsink. The ASRock X299 Steel Legend also uses an 11-phase power delivery with a large aluminium heatsink connected to the rear panel cover which designed to keep it cool.

ASRock has redefined its fabled and unique Taichi design with the new X299 Taichi CLX. Firstly ASRock has gone with a black Taichi inspired PCIe cover which dominates the lower portion of the PCB. Incorporated into the design is a contrasting silver chipset heatsink with a gold and black cogwheel design with integrated RGB LEDs. The new ASRock X299 Taichi CLX is using a 13-phase power delivery with a heat pipe connecting the heatsink within the rear panel cover to the large aluminium power delivery heatsink. Like the ASRock X299 Steel Legend, the X299 Taichi CLX also features eight memory slots with support for up to DDR4-4200 and allows users to install up to 256 GB. Looking at PCIe support, there are four full-length PCIe 3.0 slots which operate at x16/x8/x16/x8, with a PCIe 3.0 x1 slot also present. 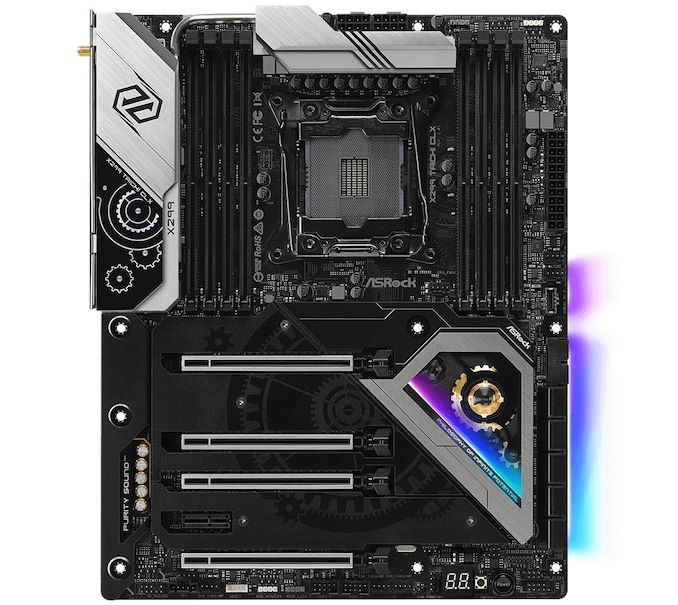 The boards three PCIe 3.0 x4 M.2 slots share bandwidth with the second full-length slot and when populating a SATA based drive, the slot will operate at x4 mode, with an NVMe drive completely disabling this slot. A Realtek ALC1220 HD audio codec takes care of the boards onboard audio, while an assisting Texas Instruments NE5532 headset amplifier is present to bolster the quality of the front panel audio with support for headsets of up to 600 Ohms. A total of 10 SATA ports are present, with eight featuring support for RAID 0, 1, 5, and 10 arrays, while the other two ports are not controlled from the X299 chipset. Instead, these are powered by an ASMedia ASM1061 SATA controller. The networking consists of a Realtek RTL8125AG 2.5 Gigabit Ethernet controller, with a second port powered by an Intel I219-V Gigabit controller; the ASRock X299 Taichi CLX also includes an Intel AX200 Wi-Fi 6 wireless interface which also offers users with BT 5.0 connectivity.

Finishing off with ASRock's new flagship X299 motherboard, the X299 Creator, its focus is on content creators with a strong high-end feature set. The ASRock X299 Creator has an Aquantia AQC107 Ethernet controller with an assist going to an Intel I219-V Gigabit controller, with an Intel AX200 Wi-Fi 6 interface providing both Wi-Fi and BT 5.0 connectivity. There are four full-length PCIe 3.0 slots which operate at x16/x8/x16/x8, with three PCIe 3.0 M.2 slots, and a total of 10 SATA ports eight of those supporting RAID 0, 1, 5, and 10 arrays.

ASRock hasn't unveiled the full specifications for the X299 Creator as of yet, and it's not likely to be cheap based on the price of ASRock's current flagship models. The ASRock X299 Creator, X299 Taichi CLX, and X299 Steel Legend models look set to be launched sometime in November, with no pricing information at present.

One highly confusing aspect to ASRock's new X299 Creator comes in the name Creator; MSI has already announced an X299 Creator model. It's bad enough that Intel and AMD consistently make its chipset names similar such as B250 for Intel and B350/B450 for AMD which can confuse, and even mislead users. Both the ASRock X299 Creator and MSI X299 Creator focus the aim at the wallets of content creators, but both share the same model name which is sure to cause confusion among users. This is not only unacceptable in the modern market, it's worth noting that MSI used to call its content creator series models the 'Creation', with ASRock unveiling its first Creator model on the X570 chipset.