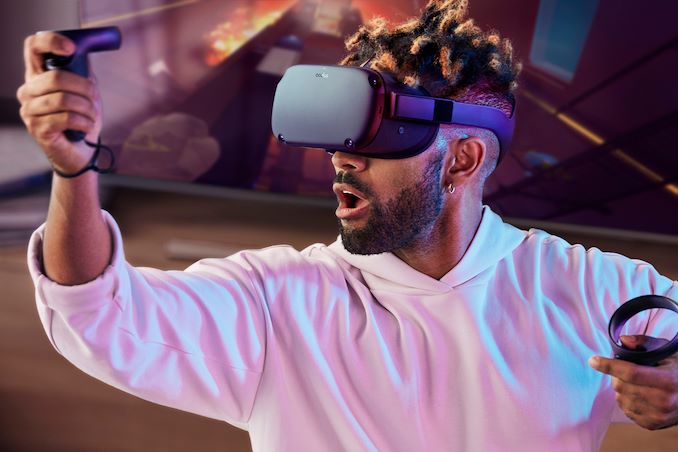 Oculus VR this week started to distribute its Oculus Link software, enabling owners of the standalone Oculus Quest VR headsets to connect them to gaming PCs and play games originally developed with the Rift and Rift S in mind. For now, VR gamers will have to use a quality third-party USB 3.2 Gen 1 Type-C cable, but later on the company promises to release its own long cable.

From now, a beta version of the Oculus Link application for Oculus Quest is available from Oculus VR as a part of the Gear VR Build 11.0 software update. To connect the Oculus Quest to a PC, one needs a high-quality USB 3.2 Gen 1 Type-C cable, though since most USB 3.x cables are around 1.5 meters long, you'll want to track down a longer specialty cable. Otherwise, Oculus promises to release a five-meter long USB-C cable in the near future to provide more freedom. Meanwhile, PC users will want to pay particular note to the fact that only NVIDIA cards are supported with the Link software at this time; Oculus will be adding AMD support at a later date.

The Oculus Quest is a standalone VR HMD featuring a display of a 2880×1600 (1440×1600 per eye) and powered by the Qualcomm Snapdragon 835 application processor. The device comes with Touch controllers bundled with the original Rift, yet relies on its inside-out 6-degree-of-freedom (6DoF) positional and controller tracking that does not require any external sensors.

In theory, making Oculus Rift games available to owners of the Oculus Quest and a compliant PC is a big deal for Oculus VR as it expands total available market of VR PC games and therefore strengthens the entire platform. This clearly does not hurt in the light of the fact that the Half-Life: Alyx game is coming and many fans of the series will have to use a VR headset to enjoy it. Meanwhile, it remains to be seen how good the actual PC gaming experience offered by the Oculus Quest will be provided that it has a higher-resolution display (when compared to both Rift and Rift S) and uses a different tracking system.