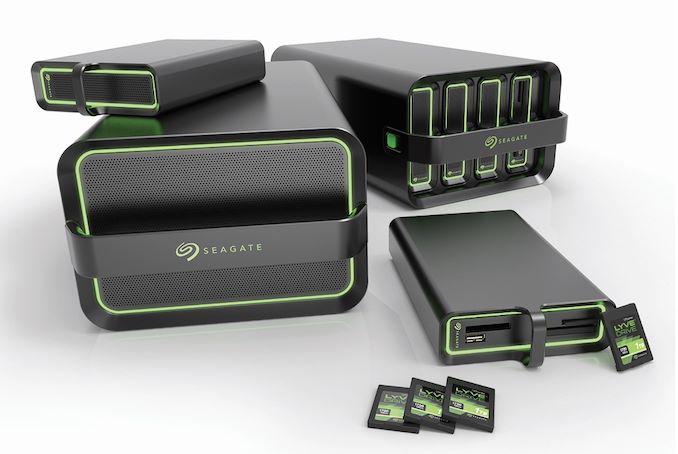 Seagate had two major announcements at CES 2020 - one featuring updates to their lineup of external storage devices, and the other related to a modular storage system with the Lyve branding on it. The novelty of the modularity and data storage capacity aside, we found the hard drives being used in the sytem to be more interesting. Seagate's demonstrations included HAMR and dual-actuator drives.

The Lyve Drive Mobile Storage System is a set of products aimed and enterprises and businesses that need to collect a large amount of data in the field and move them to centralized storage in-house at a later point in time. This is common in the media and entertainment industry (where the video recording may take place outside the studio), or, enterprises that collect sensor and image data from cars driven to train machine learning models.

The system includes high-performance CFExpress cards, a Thunderbolt 3 connector for the same, card readers, cartridges with a U.2 interface, 6-bay mobile arrays and 4-bay modular arrays (capable of handling 3.5" hard drives), a shuttle device that can act as a DAS or a network-attached drive, cartridge and array mounts and shippers, and a 4U rackmount receiver.

The Lyve Drive Mobile demonstration at CES 2020 had a 108TB Mobile Array comprising of six 18TB Exos HAMR hard drives and a 56TB Modular Array with four 14TB Exos 2x14 hard drives. The Exos 2x14 drives use the MACH.2 multi-actuator technology. The latter provides twice the IOPS and up to 480 MBps sequential write throughput compared to single-actuator drives. To our knowledge, this is the first time that Seagate has had a public demonstration of their dual-actuator drives, even though they had indicated multiple months of live production traffic on the Mach2 drives early last year.

The demonstrations indicate that HAMR and dual-actuator Seagate drives may get a public release with widespread market availability very soon. On the Lyve Drive front, Seagate didn't provide any pricing information or retail readiness status for any of the components.