Motherboards based on AMD's B550 chipset have exploded onto the scene. Despite B550 being a cost-down version of X570 for the budget market, motherboard manufacturers have gone a little overboard in offering over 50 different models to consumers, ranging in price between $120 and $300+. The usual battleground for a good solid motherboard is in the $200 range, which should enable something with the standard features but a bit of quality thrown in as well. For $210 with Wi-Fi 6 or $190 without, the ASUS ROG Strix B550-F Gaming straddles that popular price point. Today we're reviewing what the B550-F Gaming has to offer.

B for Budget, F for Fine Balance

The B550 chipset brings to the table a staple of what future motherboards need: PCIe 4.0. In most models we get it with a single x16 PCIe slot as well as an M.2 NVMe storage slot, with B550 having the angle to upgrade to newer Zen 3 processors when they are released later this year. As with any motherboard design, it can be done as cheap as possible, ensuring bare minimum compliance with specifications, or it can be overengineered to the hilt, just in case you want to go for 9000 MHz in sub-zero conditions. The B550-F Gaming aims to strike a finer balance, combining classical ROG aesthetics with some enhanced cooling and more premium controller support.

Some of the main features of the B550-F Gaming include 2.5 gigabit Ethernet, Wi-Fi 6 (on the Wi-Fi model), a menagerie of USB 3.2 Gen 2 support, and upgraded audio though ASUS' custom SupremeFX S1200A HD audio codec with additional audio tweaks. In classical ASUS style, there is also some buffed power delivery, which is set to support overclocking on even the most demanding processors.

For our multi-page review, we scruitinize the looks, the bundle, the performance and the thermals.

In our benchmarking suite, the ASUS ROG Strix B550-F Gaming performs superbly in our system tests, with big wins in our non-UEFI POST time test and DPC latency out of the box. Its performance in our power tests also puts the B550-F in a positive light, with competitive performance in our CPU and game testing too. More detail inside the review. 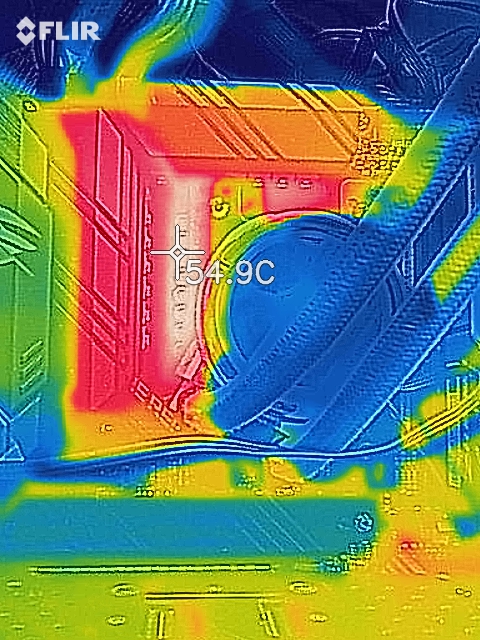 Our experience when overclocking was also competitive - it's just as good as the more expensive X570 models we have tested. Despite the lack of an integrated VRM temperature sensor, the B550-F Gaming performed very well in our VRM thermal testing with a recorded temperature of between 50 and 52 degrees Celsius on our two calibrated K-type probes. Using our FLIR thermal imaging camera, we measured 54.9 degrees celsius on the hottest part of the CPU socket area and power delivery, which is cooler than most.

Perhaps due to motherboard vendor 'eagerness', the number of B550 motherboards in the sub-$200 price range is perhaps lower than anticipated, especially as we look back at previous B-series motherboard prices. The added expense is due to a couple of things, mainly through what it takes to create official support for PCIe 4.0, and for this generation most vendors have added considerably better networking support, even more so than some X570 models at similar price points. This makes B550 attractive to the mid-range in that $200 segment, with more budget B550 models starting from $150 range starting to come to market.

The ASUS ROG Strix B550-F Gaming WiFi has an MSRP of $210, with the non-Wi-Fi 6 version available for $190. On paper this makes both models solid contenders for anyone looking to build a solid B550 based gaming system. The competition at the price point includes the B550 Gaming Carbon Wifi ($220) which includes a very similar feature set with a Realtek based 2.5 GbE Ethernet controller instead of an Intel one, and there are also a number of GIGABYTE offerings in the mix.

Read on for our extended analysis and comparison tests.