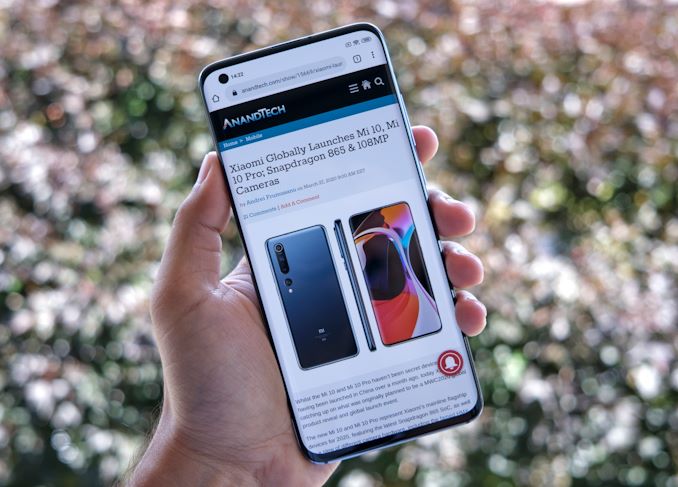 Amongst the many flagship devices released in this first half of the year, one often overlooked device was Xiaomi’s Mi 10 series. The company’s leading Snapdragon 865 phones were released quite early on, but were largely overshadowed by other competitor devices, with the phone not having official US carrier support or releases also playing a big role. In Europe and other markets however, Xiaomi is an increasingly important player and is quickly filling in the gap that’s being left by Huawei.

Today, we’re having a closer look at the Xiaomi Mi 10 Pro, how the phone stacks up against the competition, and especially how the phone’s camera system is unlike any other on the market. Although we’re reviewing the Pro variant today, Xiaomi also offer the regular Mi 10 which is essentially identical in looks and features, with the exception that it lacks some of the more versatile camera setups of the Pro variant.

In terms of specifications, the Mi 10 and Mi 10 Pro come with the newest Qualcomm Snapdragon 865 SoC which powers the vast majority of Android flagships today. The SoC’s performance and efficiency has impressed us a lot this year and it’s certain to serve as a solid foundation for the Mi 10 phones as well. 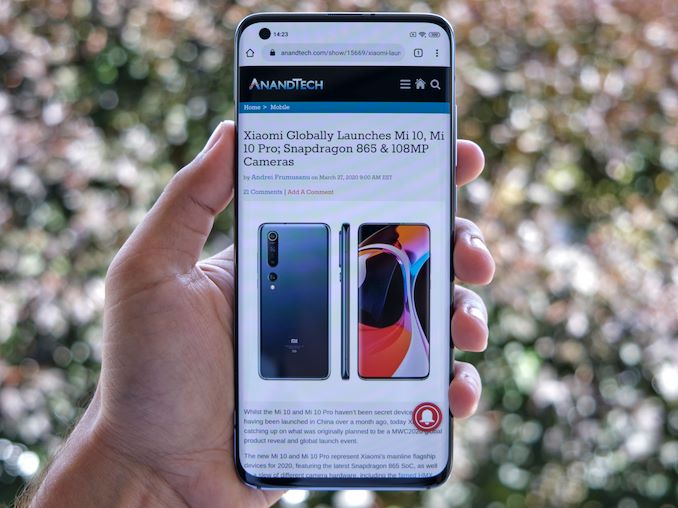 In terms of design, the phones are characterised by their larger 6.67” AMOLED screen coming in at 2340 x 1080 resolution and featuring a 90Hz refresh rate. Xiaomi here doesn’t quite match up to the competitions’ specifications of QHD resolutions and 120Hz, but as we’ve seen in other phones these generally come at a cost of battery life compromises which the Mi 10 series generally won’t have to worry about. 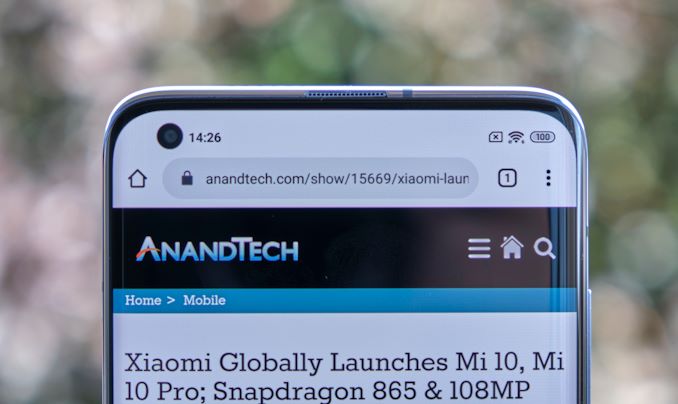 The screen features a curved edge design, with the curvature being somewhat reasonable for usage, although I’ve come to prefer the more muted design choices of the S20 series as well as the regular OnePlus 8. Xiaomi opts for a left-corner situated front camera hole-punch design – the size of the hole is bigger than that of Samsung or OnePlus, however you’d be hard pressed to notice this in everyday usage.

When you hold the phone the one thing that’s immediately noticeable is that it’s significantly heftier and heavier than devices from the competition. At 208g and 8.96mm thick, it’s indeed bigger than other phones and compares closer to the S20 Ultra than some of the other contemporaries, although the Mi 10’s do have a smaller footprint in terms of the other dimensions. Thankfully, due to the curved back glass and thinner side frame, the ergonomics are about as good as you can get with a device of this size and thickness although subjectively, I’d prefer something a bit smaller. It’s definitely a far cry from the diminutive Mi9 from last year. 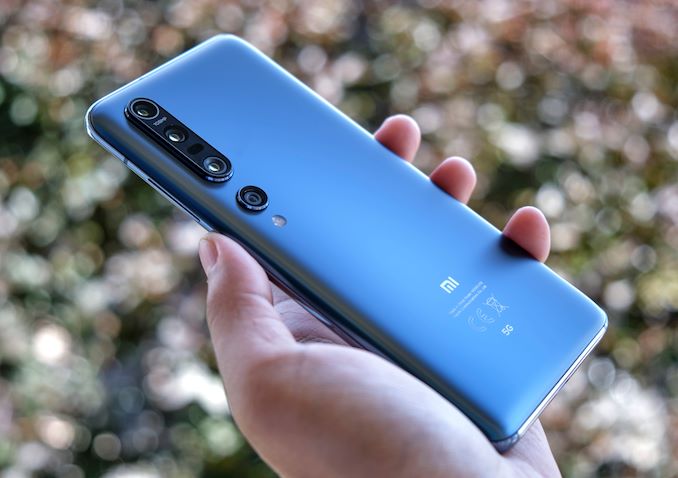 One reason for the device being this thick are the cameras and the batteries. In terms of battery capacity, the Mi 10 Pro features a 4500mAh unit, while the regular Mi 10 features a 4780mAh. At first glance it looks odd that the Pro model features a smaller batter but that can be explained by the fact that it’s housing two bigger camera modules which in the regular Mi 10 are replaced with two “gimmick” modules. 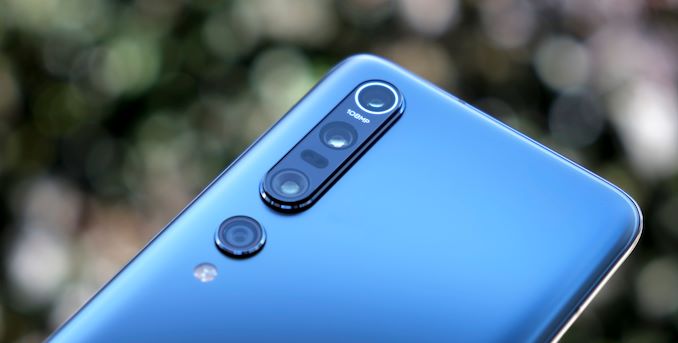 The camera setup of the Mi 10 Pro is quite special. Starting off with the main camera, we’re seeing usage of Samsung’s 108MP HMX camera sensor. This is a 1/1.33” sized sensor which is equal in size to the large unit found in the S20 Ultra, but a big difference between Samsung’s own devices and the Xiaomi devices is that the latter uses a more traditional quad-bayer colour filter array. This means that the 108MP native resolution of the sensor is by default binned down to 27MP – which actually represents the highest resolution “standard” camera mode setup of any smartphone today.

Optics wise, Xiaomi uses an f/1.69 lens setup with a quite wider 24mm equivalent focal length. It’s to be noted that given the sensor size, this represents the widest aperture amongst any smartphone today, as Samsung, Huawei and OnePlus all go for smaller f/1.8, f/1.9 and f/1.78 optics. 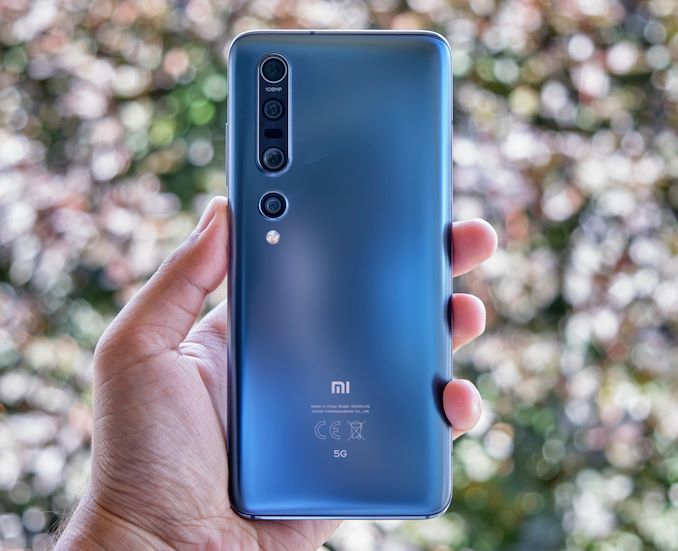 What’s special about the Mi 10 Pro’s camera setup, beyond its main sensor, is its telephoto modules. Instead of opting for the more exotic “periscope” based prism optics modules that we’ve seen from Huawei or the S20 Ultra, Xiaomi instead opts to use two dedicated classical optics modules at different focal lengths.

We find a more traditional 2x optical zoom module with a 48mm equivalent focal length, using a 12MP 1.4µm sensor and f/2.0 optics. This module generally matches 2x modules we’ve seen in the past over the last few years, but recently other vendors have dropped it in favour of longer focal length modules. Xiaomi keeping this unit on the Mi 10 Pro is a stroke of genius as the phone will not have to deal with intermediate zoom level quality degradations that’s plaguing other phones such as the S20 Ultra.

To get to higher magnification levels, Xiaomi employs a second telephoto module at 5x optical magnification and a 121mm equivalent focal length. Usually it’s very difficult to design a classical stacked lens system with such a magnification without it becoming quite large in thickness, however the Mi 10 Pro achieves this by employing a tiny 8MP 1.0µm sensor. The big advantage of this approach is that Xiaomi doesn’t have to deal with extremely bulky periscope modules, saving on internal component space and cost, and the optics of this sensor are far superior and able to accommodate a wider f/2.0 aperture rather than the more limited f/3.4 / f/3.5 optics of Huawei and Samsung.

A further area the Mi 10 phones differentiate themselves in is the speaker setup. Unlike any other vendor which uses a primary main bottom speaker in tandem with a smaller earpiece speaker, Xiaomi this time around actually features two full-range speakers on both the top and bottom of the phone, with speaker grills/holes for both units. The speaker drivers on both sides are identical which is essentially unique in a smartphone. This allows the Mi 10 to have exceptionally good sound output and basically wipes the floor with any other device on the market right now, it’s something you have to personally experience to really appreciate.

Minus points for the Mi10 are the lack of any water resistance certification as well as the lack of a 3.5mm headphone jack.