Supermicro is more commonly known for its professional workstation and server-grade motherboards, and much of this can be seen across the C9Z490-PGW. First of all, there is no integrated RGB LED lighting, nor does it include any RGB headers. Instead, the SuperO branded Z490 model uses black heatsinks on a matte black PCB, with the silver SuperO armor on the full-length PCIe 3.0 and memory slots giving a nice contrast. The SuperO logo within the plastic rear panel cover illuminates, which glows white, which puts this as one of the least flashy premium Z490 models on the market. That being said, Supermicro instead relies on its feature set, and users looking for a board with more 'pizazz' surely won't have to look far. 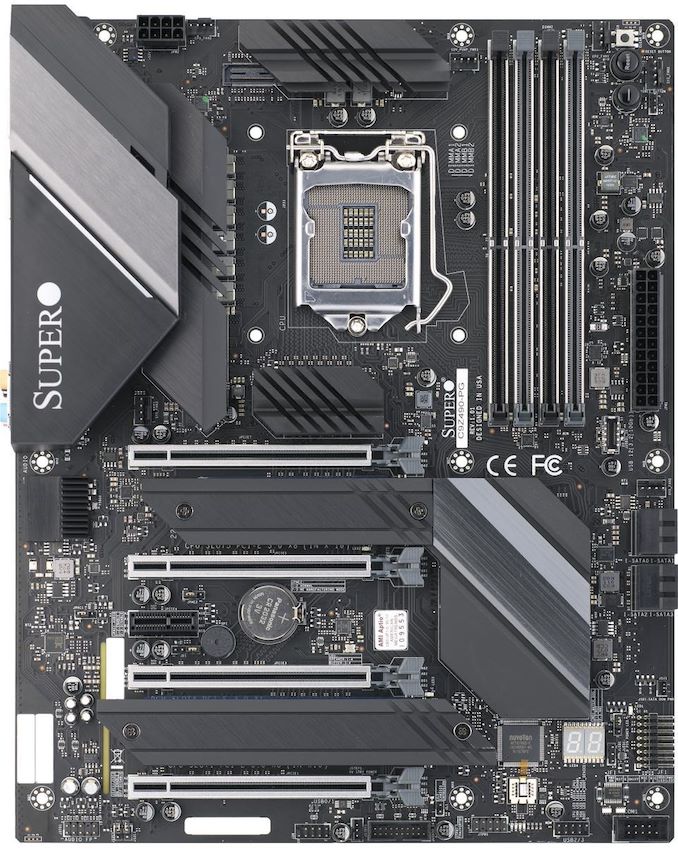 The most prominent aspect of the Supermicro C9Z490-PGW is that it has four full-length PCIe 3.0 slots. This is because it is using a Broadcom PEX8747 PLX chip. The PLX chip essentially muxes the CPU lanes, allowing for up to 32 lanes across the four full-length slots. These can operate at either x16/x0/x16/x0 or x8/x8/x8/x8. One of the main benefits of muxing PCIe lanes is it offers more expansion capabilities with RAID controllers, FPGA PCIe add-on cards, compute cards, as well as additional network controllers. Located in the middle of each pair of the full-length slots is a single PCIe 3.0 x1 slot. 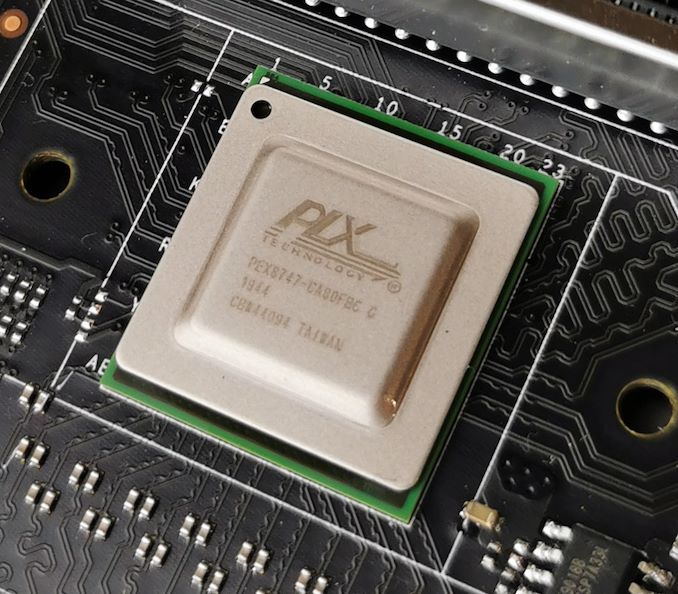 For storage there are a pair of PCIe 3.0 x4/SATA M.2 slots, with the top slot supporting up to M.2 2280 drives and the second slot allowing for up to M.2 22110 drives. Despite the Z490 chipset supporting up to six native SATA ports, the Supermicro uses just four of these. The four SATA ports include support for RAID 0, 1, 5, and 10 arrays. Memory support is limited to DDR4-4000 officially, which is considered low compared with other Z490 models. The four memory slots support a maximum capacity of up to 128 GB and include SuperO metal armor reinforcement, with support for dual-channel memory. 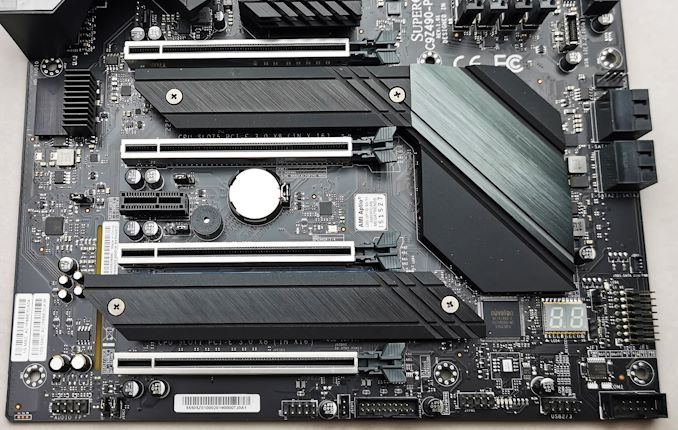 In the bottom right-hand corner is a two-digit LED debugger, which can help diagnose POST issues. This is also coupled with an internal speaker, which is common on Supermicro boards, which beep upon POSTing and specific beep codes assigned to different issues. The C9Z490-PGW is also using an unconventional front panel header orientation for the power and reset jumpers, with a right-angled design instead of straight angled. This should help with cable management. The board uses six 4-pin headers for cooling, with two designated for CPU fans, one for a water pump, and three for chassis fans. 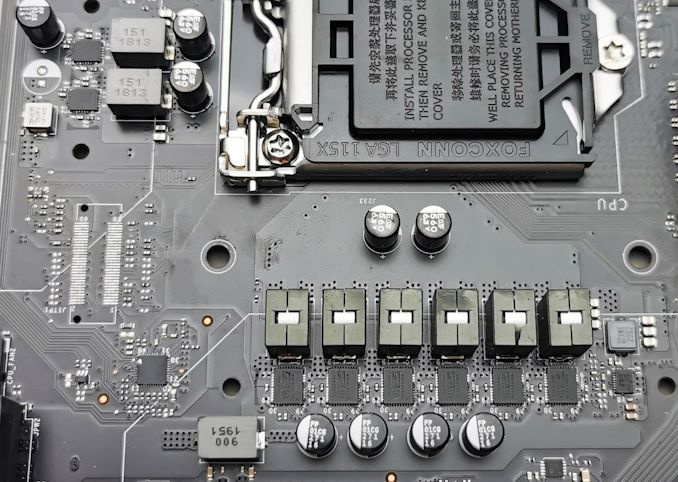 Looking at the power delivery, it is using a 10-phase design, which is driven by an Infineon XDPE12284C PWM controller operating in an 8+2 configuration. It uses premium Infineon TDA21490 90 A power stages for the CPU, with slightly lower spec Infineon TDA21535 power stages for the SoC. This power delivery is quite capable, with a maximum output of 720 A for the CPU, although it uses just one 8-pin 12 V ATX power connector. Despite this, it is more than capable of pushing an Intel Core i9-10900K to its limits on paper.

Keeping the power delivery cool is a pair of heatsinks, which aren't connected by a heat pipe like other premium models. Both heatsinks feature an aluminum top with a large surface area with fins to direct airflow, but they don't have much overall mass. This means that the power delivery is heavily reliant on good passive airflow within a chassis. 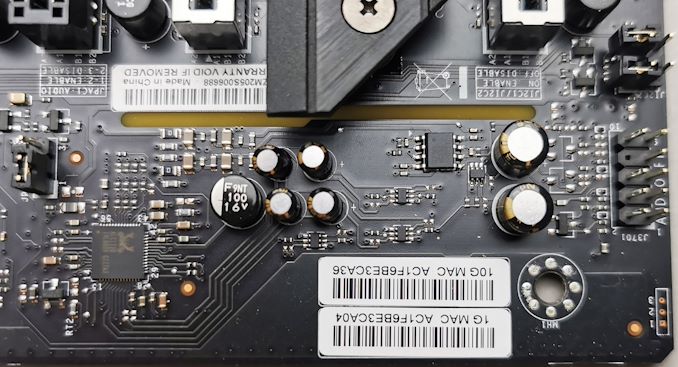 The C9Z490-PGW uses a Realtek ALC1220 HD audio codec to power both the rear panel audio connections and the front panel audio header. This is assisted by two large audio capacitors and four small ones, with another shorter and stubbier one just above these. The audio area is separated from the rest of the board's controllers, although the HD audio codec isn't protected by an EMI shield.

The rear panel is a single USB 3.2 G2x2 Type-C, one USB 3.2 G2 Type-C, two USB 3.2 G2 Type-A, and two USB 3.2 G1 Type-A. The networking has two RJ45 ports, with one powered by an Aquantia AQC107 10 GbE controller, with another by an Intel I219-V Gigabit PHY. The W in PGW stands for Wi-Fi, and as such, it includes an Intel AX201 Wi-Fi 6 interface, which also includes support for BT 5.1 devices. For audio, it includes five 3.5 mm audio jacks and S/PDIF optical output powered by a Realtek ALC1220 HD audio codec. Users looking to use Intel's integrated graphics can use the DisplayPort 1.4 and HDMI 2.0a video output pairing. Finishing off the rear panel is a small but handy clear CMOS button. 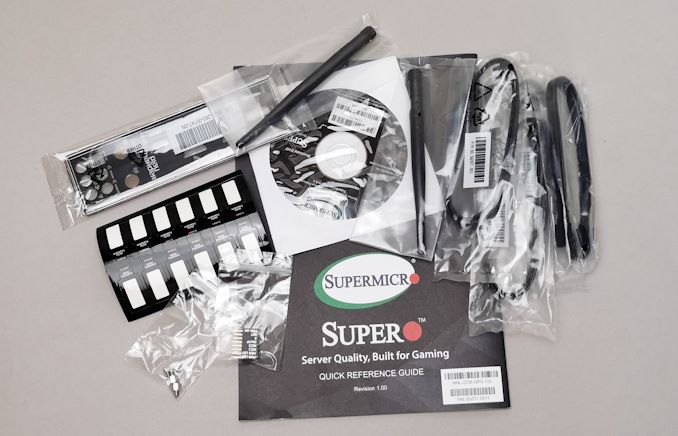 The accessories bundle includes four SATA cables, a quick reference guide, a rear I/O panel, and two antennas for the Intel AX201 Wi-Fi 6 adapter. Also present is an M.2 installation screw kit, a sticker sheet for marking up cables, and a driver and software installation disc.