Unspringsingly, GIGABYTE's B550 firmware is practically identical to its X570 models, as we've seen previously in our GIGABYTE X570 I Aorus Pro WIFI review. The GIGABYTE UEFI firmware for its AMD 500 series Aorus branded models follows a distinct black and orange theme, with white text and orange highlighting. Looking at the BIOS layout, GIGABYTE has split the firmware into two modes, easy mode for the beginner and advanced for the more experienced user. 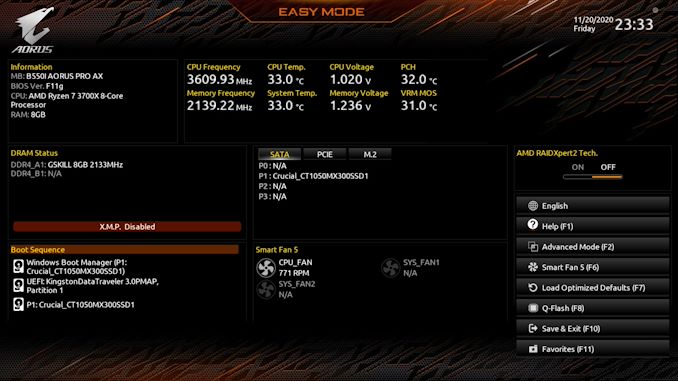 Focusing on the Easy mode screen, which is the default screen when POSTing for the first time, displays basic yet relevant information about hardware installed. Towards the top is a list of information, including the motherboard model, the BIOS version (F11g for our test), and the processor and amount of memory installed. Users can select between the different types of devices to check if the hardware is installed correctly, including SATA, PCIe, and M.2 devices, as well as a basic list of Smart 5 fan details for the board's three 4-pin fan headers. Along the right-hand side, users can select between different functions, including the advanced mode by pressing the F2 key, load up the Smart Fan 5 tuning utility by pressing F6, and the board's integrated Q-Flash utility for updating the board's firmware by pressing the F8 key.

The rest of the board's firmware focuses on the Advanced mode, which can be done by pressing the F2 key. This allows users to select between various BIOS functions, including the Tweaker sections where all of the board's CPU, memory, and integrated graphics overclocking can be done. Users can adjust CPU frequency, the base clock (BCLK), CPU VCore, among many other voltage settings, including CPU VDDP and DRAM termination voltages. This is also where users can enable XMP profiles at the click of a button or customize memory profiles further for performance tweakers. It should be noted the sweet spot for Ryzen 3000 processors is DDR4-3600, with an Infinity Fabric clock speed of 1800 MHz.

Overall, GIGABYTE's Aorus UEFI firmware keeps things simple with the basic mode, with a basic looking, but the bountiful and endless list of configurable variables, most of which can be found in the Tweaker section. The firmware itself is responsive and offers users from both the novice and advanced spectrums plenty of options to work with.

All of the major motherboard vendors have equally impressive software packages, with various functions to use all of the boards primarily features. GIGABYTE includes plenty with the B550I Aorus Pro AX model, including the EasyTune software designed to allow users to overclock within Windows, the RGB Fusion 2.0 software to control the board's RGB capabilities, and the System Information Viewer (SIV). The SIV software allows users to access the Smart Fan 5 utility within Windows and allows for system alerts for over-voltage and various temperatures. 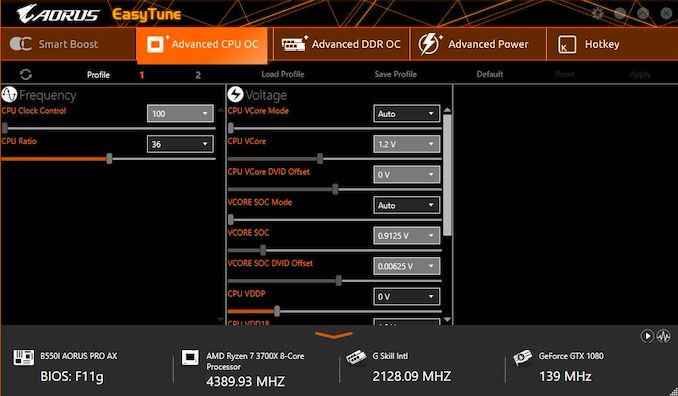 The most prominent piece of software bundled with the GIGABYTE is the Aorus Easy Tune software. This allows users to overclock the memory and CPU within Windows, with plenty of voltage options and important CPU ratio and memory ratio settings. We still recommend all of the overclocking is done within the BIOS, but overclocking software has come a long way over the last decade, and Easy Tune is quite intuitive.

Unfortunately, GIGABYTE doesn't include any audio software within the bundle, and users looking to make customizations will need to download the Realtek Control Panel directly from the Microsoft Store. Focusing on what is actually there, the bundle offers plenty of customizability. This includes the Fusion 2.0 RGB software for those adding additional RGB LED strips and the Realtek Gaming LAN manager for traffic shaping when used with the RTL8125 2.5 GbE port on the rear panel. It's not the most comprehensive software suite we've seen over the years, but it's more than enough for a sub $200 model aiming at the mid-range.