The Xiaomi Mi 11 Review: A Gorgeous Screen and Design

When we covered the new generation SoCs in our chip-coverage of the Snapdragon 888 and Exynos 2100, GPU performance was an extremely contentious topic there as the new 2021 silicon generation showcased some extremely hot peak power consumption numbers in excess of 8W. These kind of power figures really aren’t sustainable in any phone, and the Snapdragon S21 Ultra really didn’t do well in terms of its throttling, ending up with performance that’s really no better than its predecessor generation in most cases.

I alluded in that piece that the Mi 11 would be a more aggressive device in terms of its thermals, as Xiaomi allows its phones to reach higher peak skin temperatures whereas Samsung seems to have a 42°C maximum target.

Indeed, the new Mi 11 will in routinely reach peak skin temperatures of 50-51°C, but it’s at that stage where we hit an enormous problem with the device: it errors out with an overheating warning.

This is by far not the first time we’ve encountered this issue. I remember the Snapdragon Galaxy S9 encountering it as well as many other Samsung Snapdragon phones, and I’ve seen it happen to many Xiaomi devices as well.

Generally speaking, when this occurs it’s a sign there’s something absolutely wrong with the device and its thermal management. In the past, there’s been indications that these are “optimisations” that are trying to cheat benchmarks, particularly for devices that are targeted at the Chinese market.

In the case of the Mi 11 – I don’t really have any kind of evidence that this behaviour is targeted solely at benchmarks, as I cannot see the device behaving differently with anonymised workloads. Let’s go briefly over the results before I comment more on the real-world device performance: 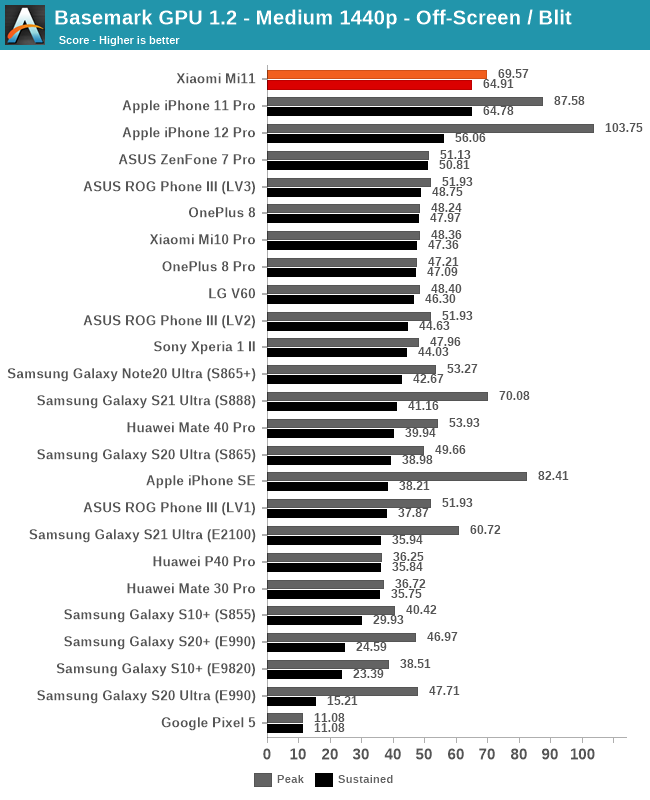 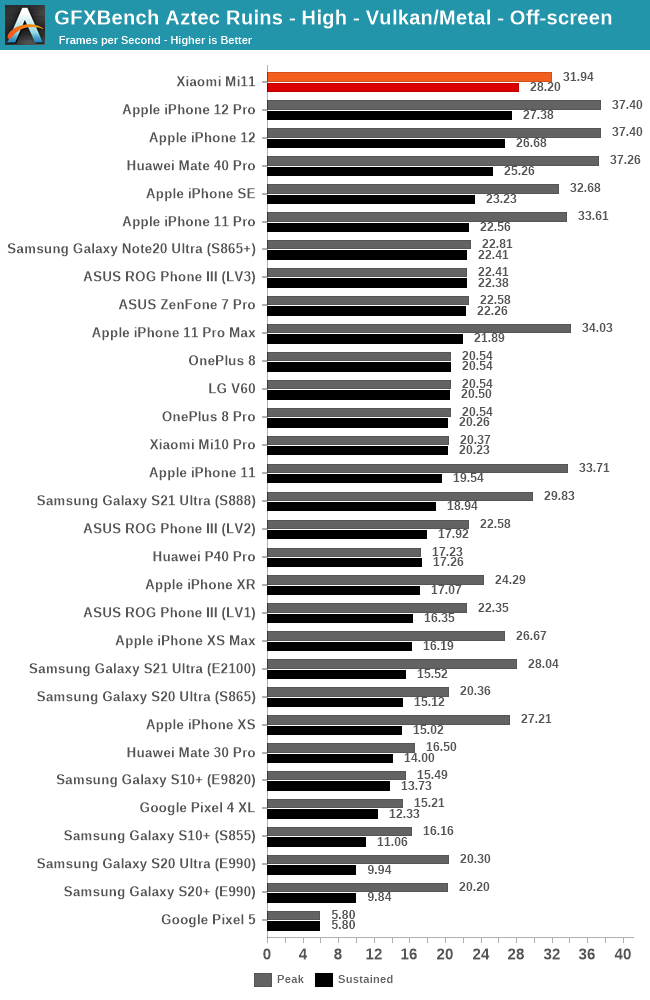 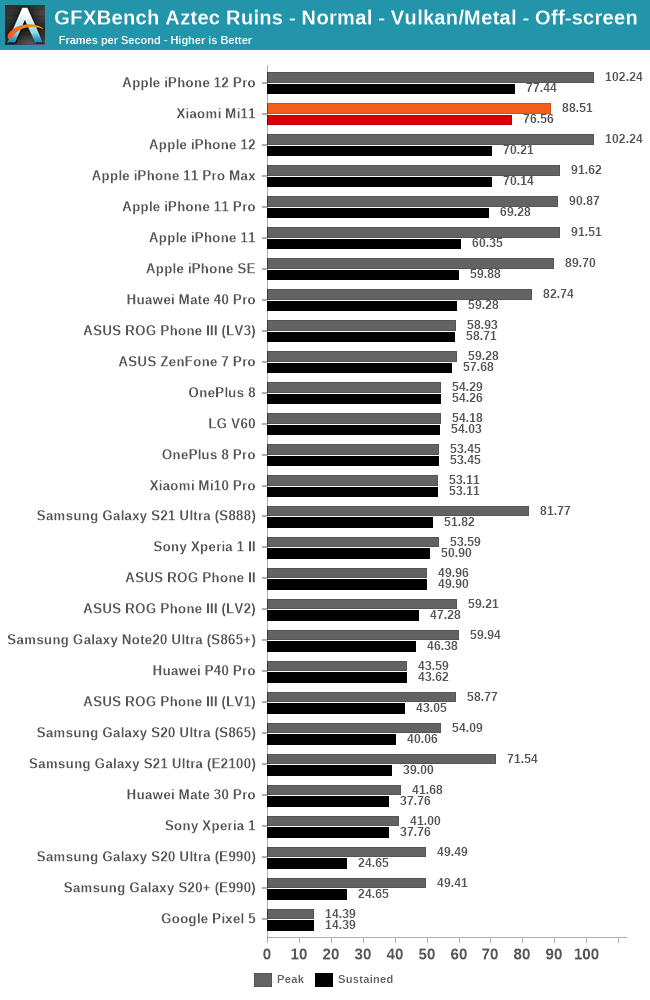 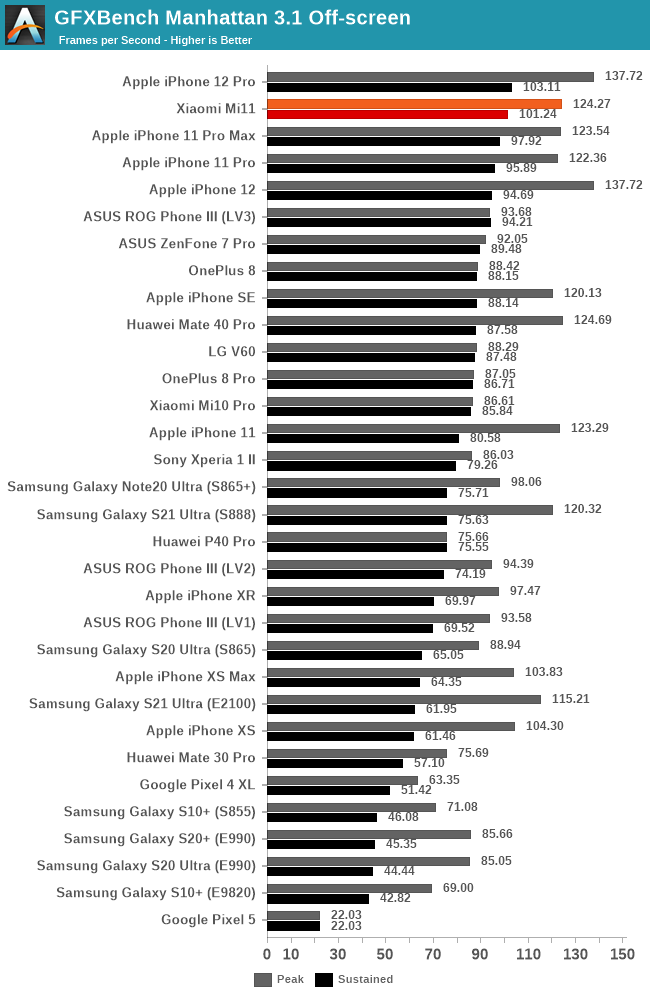 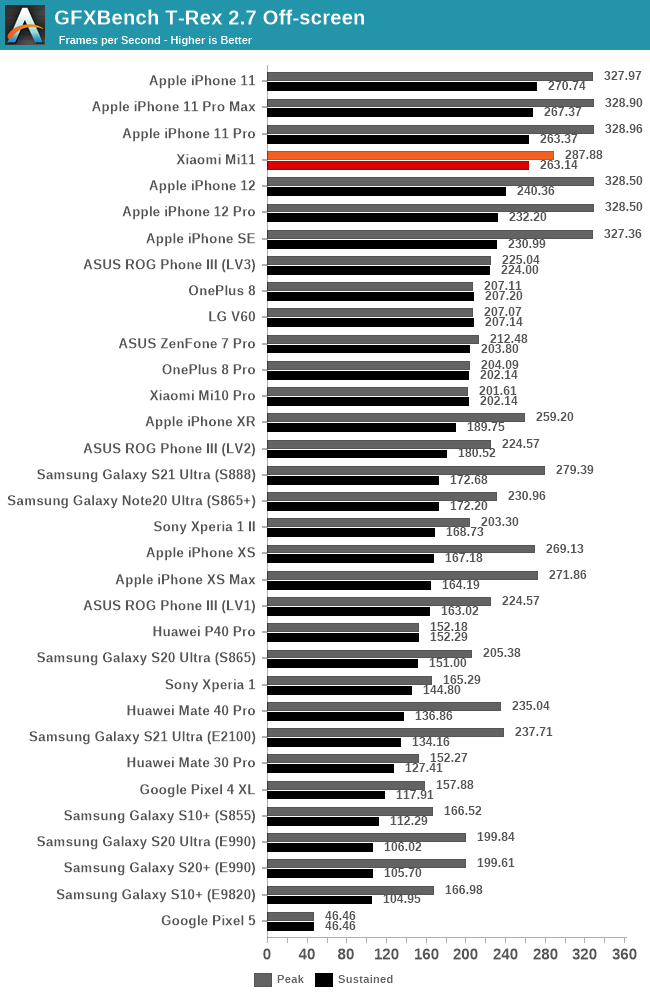 As you see, the Mi 11 is able to top the charts in almost every benchmark. Again, the problem with those scores is that they’re not actually truly indefinite “sustained” scores, as the device at some point will simply give off that overheating warning.

It’s a very special scenario we’re encountering here where the actual benchmarks absolutely do not line up with the actual performance of the device in real games. Although the Mi 11 will go about and sustain 7-8W in the benchmarks, heating up to silly temperatures, but posting great performance figures, it really doesn’t behave that way in games.

In Genshin Impact, which is one of the most demanding games out there right now, the Mi 11 will start off with great performance and will showcase power consumption of >7W. However after prolonged plays, the device will actually throttle, and power consumption will reduce to the 5W range, and surprisingly, the phone won’t heat up beyond the 44°C range. I’ve seen the GPU operate in the 400MHz range here, which is half of its peak performance, and obviously enough the game also falls down well below the 60fps mark which it might achieve when it’s cool. This indicates, that in real games, the thermal management seems to be working well.

This discrepancy between benchmarks and real games is extremely frustrating for me here as I cannot pin down why exactly it happens. Are the vendors cheating through whitelisting only real games in the thermal management? Whatever the real answer is, the end result of the Mi 11 in gaming is that it’s not drastically different than past Snapdragon 865 devices, or at least only marginally better. This is a case of where I suggest to just ignore the above benchmark numbers – although I’m still publishing them until I see definitive proof of possible malicious behaviour.