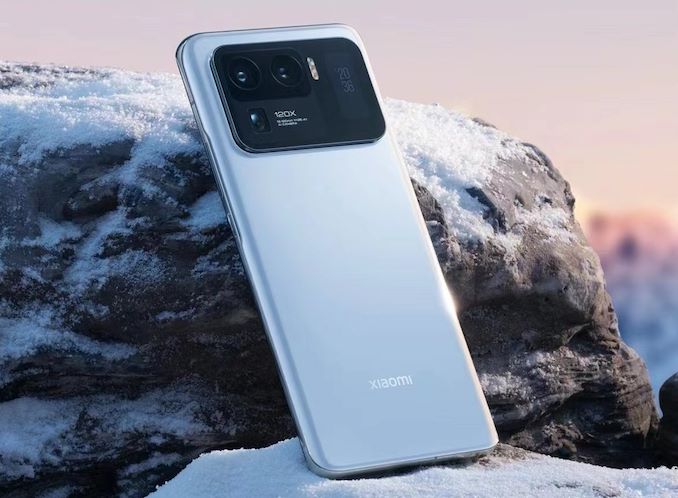 It’s been a little less than 3 months since Xiaomi released their first Mi 11 series device, the baseline Mi 11 which we reviewed a few weeks ago. Today, within a flurry of device announcements, Xiaomi announced the new Mi 11 Ultra as a higher-end follow-up to the Mi 11, representing the company’s newest top-of-the-line smartphone with new unprecedented camera capabilities.

The new Mi 11 Ultra is defined by its camera setup, which is pretty much extraordinary in its specifications as well as design. The phone is the first device to come with Samsung LSI’s new GN2 sensor which measures in at a massive 1/1.12” optical format, featuring native 50MP of 1.4µm pixels, capable of binning down to 12.5MP 2.8µm pixels. Xiaomi also offers a 48MP ultra-wide module, as well as a 48MP 5x periscope telephoto module for far reaches. Weirdly enough, the Mi 11 also features a small 1.1” OLED display alongside the camera setup – possibly enabling more full-fledged selfie experiences using the rear cameras.

Interestingly, the phone’s design and dimensions mostly match that of the Mi 11, with the camera layout, thickness and weight really being the major differences in the new Ultra model.

The Mi 11 Ultra is powered by the Snapdragon 888 – much like the Mi 11. In terms of performance, we should expect the new phone to pretty much match what we’ve seen in the Mi 11, which means excellent device experience with pretty much the best of what we can expect of an Android device for this device generation. Xiaomi does advertise advanced cooling solutions, however generally phones of this form-factor are simply limited to a thermal envelope of 5W, as that is the rough external heat dissipation through convection and radiation of any device with this kind of thermal behaviour.

Other novelties on the Mi 11 Ultra is the Wi-Fi upgrade from a regular Wi-Fi 6 capable chip to a newer Wi-Fi 6E implementation, and naturally it retains all the 5G connectivity features of the baseline Mi 11 model. 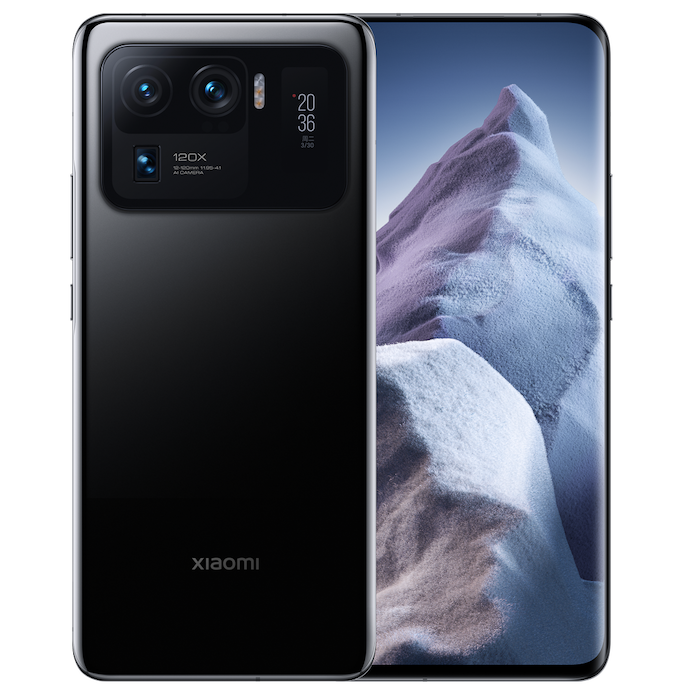 The display of the Mi 11 Ultra appears to be the exact same as on the Mi 11. This is a 6.81” model with a QHD+ resolution of 3200 x 1440, a software based adaptive refresh rate of up to 120Hz, and advertises itself as a 10-bit capable panel, with a high touch sample rate of 480Hz for low-latency input. While the display is excellent in picture quality, we’ve seen that the Mi 11 wasn’t one of the most efficient devices on the market, characterised by higher base device power consumption and a 120Hz mode that isn’t as efficient as newer LTPO-based displays on Samsung devices. We’ll have to see if the Mi 11 Ultra suffers from similar efficiency weaknesses. 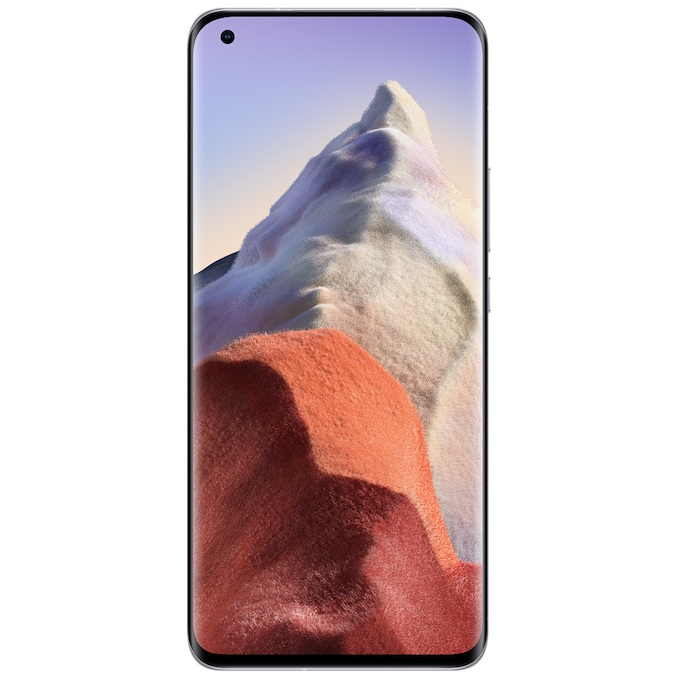 The nice thing about the design of the Mi 11 Ultra is that from the front it’s pretty much identical to the Mi 11. With the same screen dimensions, the device form-factor is also almost the same, featuring an identical 164.3mm x 74.6mm height and width as the Mi 11.

Where things change is in the thickness and weight of the phone. The body gains 0.32mm to a still rather thin 8.38mm, however the weight grows quite substantially from 196g to 234g.

With the weight increase comes also a larger battery, up 8.6% to up to 5000mAh. Xiaomi advertises that this is the industry’s first silicon-oxygen anode Lithium battery, and is one of the key aspects which allow it to allow charging speeds of up to 67W. The new anode technology is definitely promising for improving battery charge degradation – however I’m still sceptical as to the actual absolute figures and how regular fast-charging at these rates will impact battery life-time. 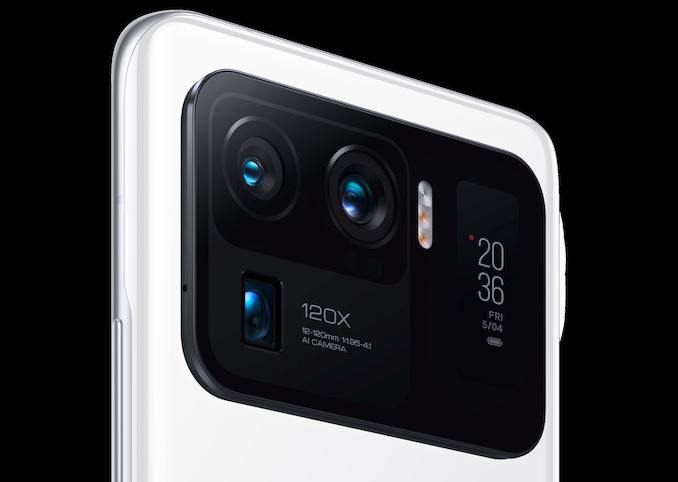 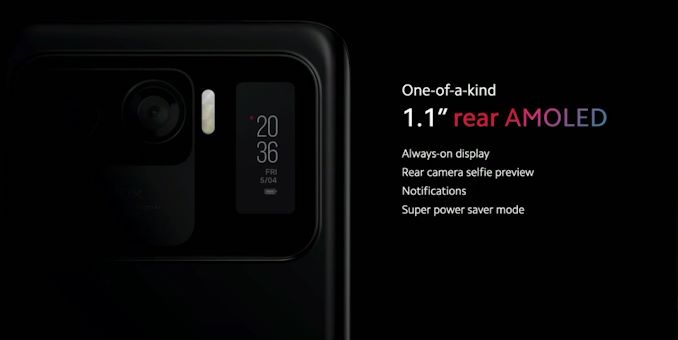 The top-line feature of the Mi 11 is its new triple-camera setup. Let’s start off with the oddest feature that isn’t actually a camera: a secondary small rear OLED screen, 1.1” in diagonal and a 126 x 294 resolution. It’s located within the very large camera bump to the right of the cameras. It’s quite gimmicky, but allows for easier usage of the higher-quality rear cameras for selfies and selfie videos as it can act as a view-finder.

The other obvious headline feature is the usage of Samsung LSI’s newest GN2 sensor. This is currently the largest camera sensor in any mobile phone on the market, measuring in at 1/1.12” optical format – keep in mind that optical format doesn’t actually correspond to the physical dimensions of the sensor which actually falls in at 11.4 x 8.6mm (14.3mm diagonal) active area.

What’s special about the sensor is also that Xiaomi is transitioning away from their 108MP resolution from the past 2 generations to 50MP. The actual native pixel size of the GN2 is 1.4µm, and the sensor has a Quad-Bayer colour filter setup, able to 4:1 bin to 12.5MP pictures with effective pixel sizes of 2.8µm. Due to the lower resolution, the actual per-pixel size is significantly larger than the 27MP 1.6µm picture shots of the Mi 11 and previous Mi 10 series – at the same time, it’s also the largest per-pixel size of any smartphone in the market.

The GN2 is also the first sensor in the industry to offer a new “Dual Pixel Pro” technology – essentially this is the return to dual-pixel phase detection which we had in previous generation devices and had to be abandoned with the newer 108MP sensors. The “Pro” part of the new GN2 refers to the alternative diagonal separation of pixels: usually the traditional dual-pixel PD would allow phase-detection in on axis, while this new dual-pixel setup would also allow phase detection in the 90° angle of the DP arrangement, improving auto-focus speed.

It’s also a staggered HDR sensor, much like the new HM3 sensor in the Galaxy S21 Ultra, being able to capture subsequent different shutter speed captures directly following the rolling shutter readout of the previous frame, instead of waiting for complete sensor readouts between frames.

Xiaomi’s optics on the Mi 11 Ultra’s main camera should be extremely challenging given the ginormous sensor size, and thus falls in a comparatively smaller f/1.95 aperture. It’s a 24mm equivalent focal length which has been standard for Xiaomi’s recent flagships, and features OIS.

Generally speaking, this main camera module right now is by far the strongest in the smartphone market, and should be easily able to outperform most other competitors – as long as Xiaomi’s processing also is able to keep up. 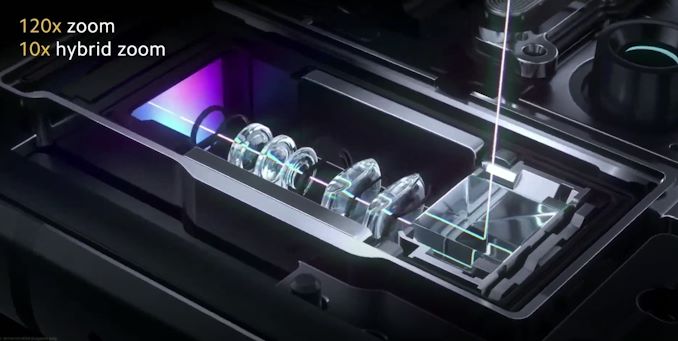 Alongside the main sensor, Xiaomi also dons the phone with a 48MP 1/2.0” 0.8µm 5x optical periscope telephoto module with a native 120mm equivalent focal length. This setup is actually quite similar in specs to what we’ve seen in the Galaxy S20 Ultra last year, with the only difference being that Xiaomi has optics at f/4.1 while the S20U had f/3.5. How the quality of the telephoto ends up depends on the quality of the optics and how Xiaomi takes advantages of the 48MP native resolution of the sensor – and when to use the 4:1 bin mode to 12MP.

Xiaomi avoids having a intermediary telephoto module between 24mm and 120mm focal lengths, here we hope that Xiaomi uses Huawei’s method of capturing images in the >2x range through the main sensor’s native 50MP mode – considering the native 1.4µm pixels this generation, this should be a quite evident solution to bridge the gap.

It’s very clear that the Mi 11 Ultra is extremely camera centric. I consider Xiaomi’s image processing to be quite good, however the newer generation sensors of the competition still had clear advantages compared to say the baseline Mi 11. The Ultra’s new hardware is truly next-gen though, and hopefully should allow the phone to achieve new heights in photography. Of course, the proof is in the pudding is in the eating, and we’ll have to see how it performs in our upcoming future review.

Being a device of the “Ultra” designation, the new Mi 11 Ultra comes at a quite higher price than its regular Mi 11 counterpart. Xiaomi doesn’t quite reveal timing of the availability, but announces the Mi 11 Ultra at 1199€ for the standard 12+256GB version. This is the same price as the 128GB variant of the S21 Ultra, so Xiaomi is definitely aiming higher than they ever did before in terms of product placement.

We’ll be reviewing the Mi 11 Ultra in the near future once we get our hands on it.