Sitting below the Z690 Taichi in its product stack, ASRock also has a couple of Phantom Gaming series branded boards for Intel's Z690 and Alder Lake launch. The most apparent of the ATX sized versions is the ASRock Z690 PG Velocita, which was introduced back during the launch of Intel's 10th generation Z490 chipset. The ASRock Z690 PG Velocita has an interesting design layout, with elements of black, red, and purple within the rear panel cover, and integrated RGB LEDs built into both the rear panel cover and chipset heatsink. 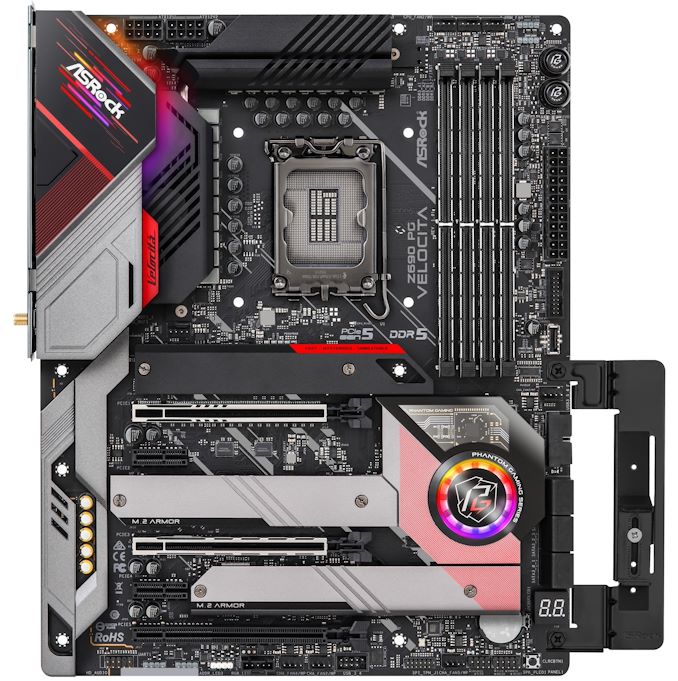 Looking at the board's PCIe slot support. ASRock includes five PCIe slots in total, including one full-length PCIe 5.0 x16, one full-length PCIe 4.0 x4, one full-length PCIe 3.0 x4 slot, and two PCIe 3.0 x1 slots. For storage, there are four M.2 slots in total including one with support for PCIe 5.0 x4 drives when they eventually hit the market, two PCIe 4.0 x4 M.2 slots, and one PCIe 3.0 x4 M.2 slot. ASRock also includes six SATA ports with support for RAID 0, 1, 5, and 10 arrays. Located in the top right-hand corner are four memory slots, which can support speeds of up to DDR5-6400, and a combined capacity of up to 128 GB.

On the rear panel of the ASRock Z690 PG Velocita is one USB 3.2 G2 Type-C, one USB 3.2 G2 Type-A, six USB 3.2 G1 Type-A, and two USB 2.0 ports. There's a pair of video outputs consisting of an HDMI and DisplayPort, while five 3.5 mm audio jacks and S/PDIF optical output are powered by a Realtek ALC1220 HD audio codec. The board includes two RJ45 ports, with one powered by a Killer E3100G 2.5 GbE controller, and the other by an Intel I219-V Gigabit controller, with wireless support coming from a Killer AX1675 Wi-Fi 6E CNVi. Finishing off the rear panel is a small BIOS Flashback button.