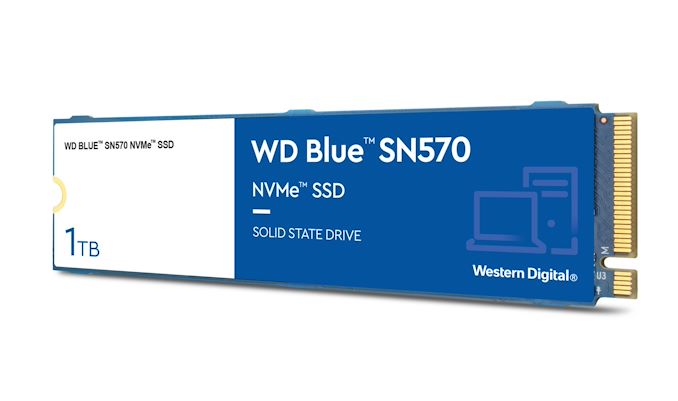 Western Digital is unveiling its latest addition to the WD Blue family today - the SN570 NVMe SSD. A DRAM-less PCIe 3.0 x4 drive, it brings in performance improvements over the current lead product in the line - the SN550. In order to better appeal to the content creators market, WD is also bundling a free month of membership to Adobe Creative Cloud.

Similar to the SN550, the SN570 is also available in three capacities - 250GB, 500GB, and 1TB. All drives are single-sided, come with a 5-year warranty, and carry a 0.3 DWPD rating. The key performance improvement over the SN550 is the increase in sequential read speeds from 2400 MBps to 3500 MBps. Though Western Digital wouldn't officially confirm, we believe this is likely due to the move from BiCS 4 96L 3D TLC to BiCS 5 112L 3D TLC. We did obtain confirmation that these drives are set to be equipped with 3D TLC over their complete lifetime, and will not move to QLC.

The WD Blue series started getting credible competition in the entry-level DRAM-less NVMe SSD space recently from Samsung's 980 series. Using 128L V-NAND technology with higher flash speeds, Samsung was able to advertise better sequential performance numbers that the WD Blue. Our review did find the original SN550 holding up better for heavier workloads, but the advertised numbers are hard to dismiss for the average consumer. The new SN570 should solve that problem for WD. On the other hand, Samsung enables TCG Opal support in the 980, while WD opts not to enable it for the Blue series.

In terms of pricing, the SN570 matches the 980 (at least at the 250GB capacity point). Assuming that the SN570 can match the SN550's performance for real-world workloads, the Adobe Creative Cloud value-add might just tilt the choice in its favor - at least for the content creators market. We are yet to receive the final datasheet, and the table above will be updated once we have additional details.