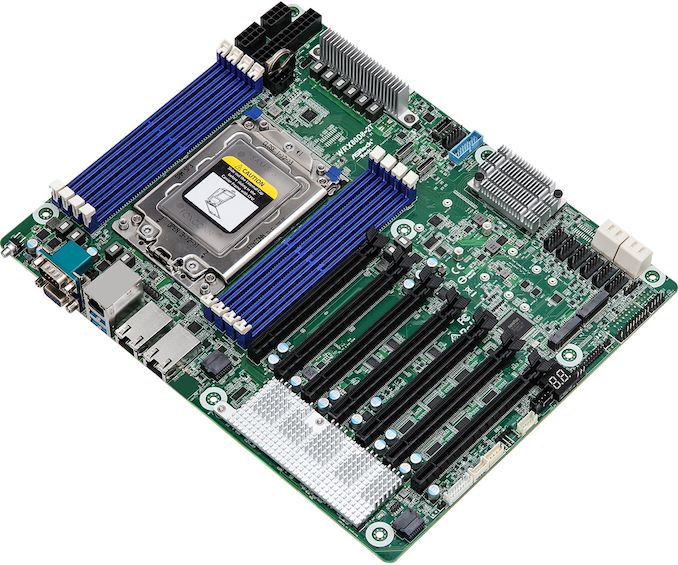 In terms of design, the ASRock Rack WRX80D8-2T follows a basic green design with blue memory slots and black PCIe slots, and power connectors. Surrounding a transposed sTRX4 (WRX80) socket is eight memory slots with support up to 2TB of capacity, with ECC and non-ECC UDIMM, RDIMM, LRDIMM, and RDIMM3DS memory types supported. Providing power to the motherboard is a 24-pin 12 V ATX power input, while CPU power comes from a pair of 8-pin 12 V ATX CPU power inputs, all of which are located in the top right-hand corner. 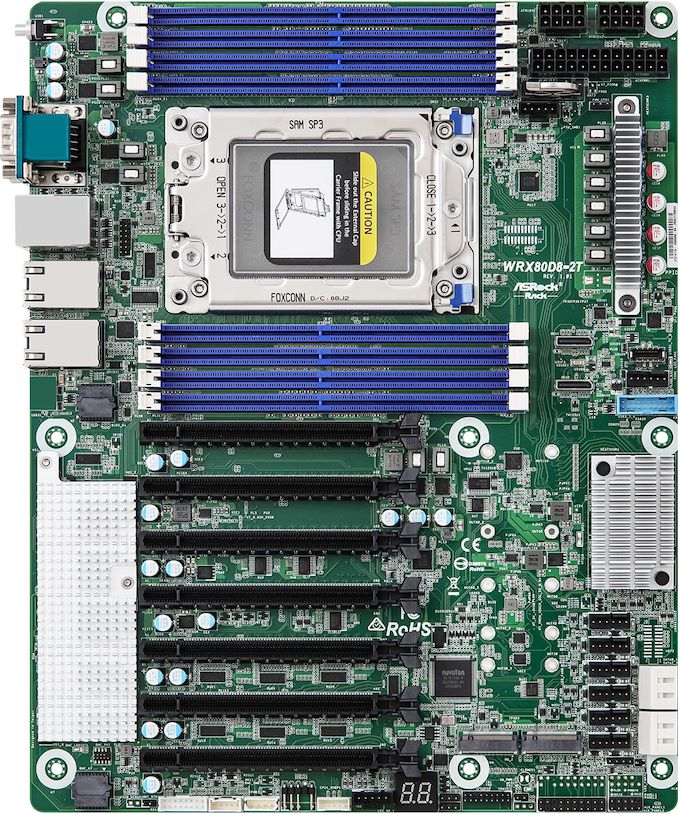 Dominating the lower half of the board are seven full-length PCIe 4.0 x16 slots, which are designed to maximize 112 of the supported 120 PCIe lanes from the Zen 2 based Ryzen Threadripper Pro 3000WX processors. Focusing on storage, the WRX80D8-2T has support for twelve SATA ports from the WRX80 chipset with two OCuLink ports, including four regular 7-pin SATA ports. Users can add U.2 storage with two OCuLink ports at PCIe 4.0 x4 or use these for an additional four SATA ports apiece. Other storage options include two PCIe 4.0 x4 M.2 slots with support for form factors up to 22110 M.2. Cooling options consist of seven 6-pin fan headers.

On the rear panel are two USB 3.2 G1 Type-A ports, with a dedicated Realtek RTL8211E Gigabit management LAN port and D-Sub video output powered by an ASPEED AST2500 BMC controller, which adds IPMI support. Users looking to add more USB ports can do so via front panel headers, including one USB 3.2 G2 Type-C header and one USB 3.2 G1 Type-A header for an additional two ports. Networking includes two RJ45 ports, which an Intel X550-AT2 10 GbE controller powers. Finishing off the rear panel is a Serial port, and a small UID identification LED button.

At the time of writing, we don't have any information on either the pricing or availability of the ASRock Rack WRX80D8-2T.