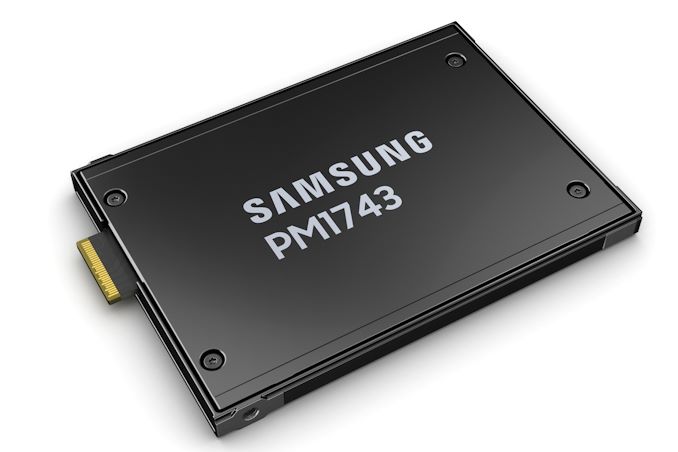 Even though CES 2022 is technically still a couple of weeks away, CES-related announcements are already starting to roll in. Among these are Samsung, who is announcing their first PCIe 5.0 SSD for servers, the PM1743. Based around a new, unnamed PCIe controller, Samsung’s latest server SSD is pairing that with the company’s current (sixth) generation V-NAND. Based on their published specifications, Samsung is touting upwards of 70-90% better performance over their previous-generation drive based on the workload. And tying in with CES in a couple of weeks, the new drive has already been awarded a CES 2022 Innovation Award.

At a high level, the PM1743 is the successor to Samsung’s current PM1733 enterprise SSD. Whereas the existing drive is based around a PCIe 4.0 controller and Samsung’s 96L fifth-generation V-NAND, the PM1743 bumps this up to PCIe 5.0 and 128L sixth-generation V-NAND instead. Given the general nature of today’s announcement, the company isn’t offering detailed technical specifications on the drive’s architecture, but between the NAND and controller improvements, they would seem to largely be able to keep up with the additional bandwidth afforded by the move to PCIe 5.0.

On paper, the PCie 5.0 x4 link the drive uses can reach bandwidth rates as high as 15.76GB/sec. For the PM1743, in turn, Samsung is claiming peak sequential read rates of 13GB/second, and peak sequential write rates of 6.6GB/sec (presumably to the drive’s SLC cache). This adds up to 86% higher peak read speeds and 89% higher peak write speeds than the PM1733. Or to put that in terms of IOPS, Samsung is claiming that the new drive will be able to hit 2.5M IOPS on random reads, and 250K IOPS on random writes.

The updated Samsung controller is also embedding its own security processor and root of trust. Samsung’s announcement is light on the details, but at a high level, the company is doubling down on security by giving the drive a degree of security control independent of the host server.

The company is also touting these updates as having improved the energy efficiency of the PM1743 by 30% over the PM1733, bringing it to 608MB/sec/watt. Given that data transfer rates have improved by upwards of 90% while power efficiency has only improved by 30%, it looks like the PM1743 will have a higher active power utilization rate than its predecessor. Doing some napkin math against the PM1733, which has a published figure of 20W, would put the active power of the PM1743 at around 30W.

Meanwhile, Samsung’s press release also confirms that the company has been working with Intel to validate the new drive. Samsung doesn’t go into any further details, but with Alder Lake (12th gen Core) already shipping now as the first mass market PCIe 5.0-capable platform, Samsung has presumably been testing against that, as well as the forthcoming Sapphire Rapids (next-gen Xeon) platform.

New for this generation of SSDs, Samsung will be offering the PM1743 in two form factors. The first will be the traditional 2.5-inch U.2 form factor. Meanwhile, joining U.2 will be E3.S, a newer 3-inch enterprise and data center form factor that is designed to be slightly larger than U.2 drives while incorporating a connector that can handle up to 16 lanes of PCIe.  SSDs of course won’t use that many lanes, but it’s a form factor that both drive and system vendors have been pushing for, making it the front-runner as the eventual successor to U.2. Based on last year’s publication of the E3 2.0 specification, we had been expecting E3.S drives to land in early 2022, so Samsung is right on time.

Finally, the PM1743 will be offered in capacities ranging from 1.92TB to 15.36TB, the same capacities the PM1733 is available at today. So although there is no capacity increase to speak of on a single drive level, since E3.S is half the thickness of a traditional 15mm U.2 drive, Samsung is touting the overall density improvements the new drive will afford. Essentially, if a server uses E3.S, it will be able to accommodate twice as many drives (and thus twice as much storage capacity) as a U.2 configuration.

The PM1743 is sampling now, and according to Samsung mass production will begin in the first quarter of next year.