Today you will find an expanded line of flash memory products at Super Talent that range from flash cards for devices to Solid State Drives. The traditional memory offerings now include memory targeted at the desktop, laptop, and server markets, and a specialized line of high-performance overclocking memory. Manufacturing is in the US with 14 SMT assembly lines, which Super Talent claims is the largest and most modern memory manufacturing facility in North America. All memory products are 100% tested for compliance with specifications. Memory and flash products come with a lifetime warranty. 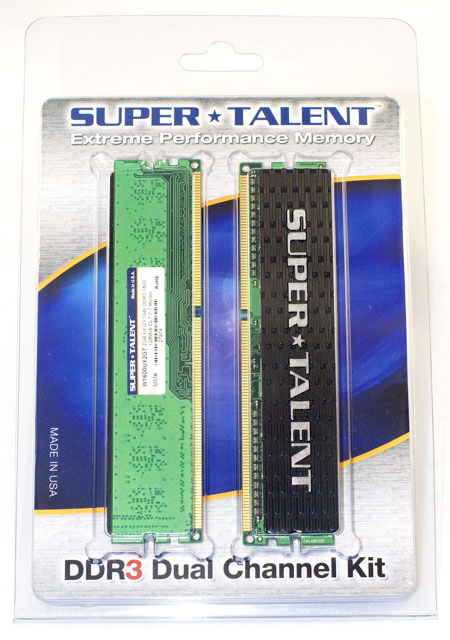 We complained in early Super Talent reviews about the somewhat amateurish packaging of Super Talent DIMMs. That has matured over time, and as you can see above, Super Talent uses the protective clamshell common in the memory industry and attractive high-gloss graphics that help communicate manufacturer identity. 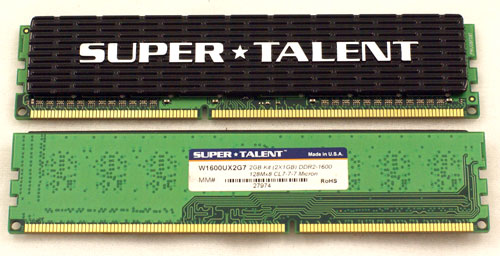 The DIMMs themselves are typical Super Talent. The only feature that makes them stand out in appearance is the increasingly familiar "basketweave" design identifying the memory as Super Talent. This 2 GB kit is made up of two 1GB DIMMs that are populated on just one side. Super Talent chose to use just one heatsink on the populated side which works very well for keeping the DIMM cool. With the current density of Micron Z9 memory chips it would be a relatively easy task to make a 4 GB memory kit. However, performance and timings would likely be somewhat below current specs in a 4 GB kit (not to mention what such kits would cost given current Z9 memory chip pricing).


DDR3 is lower voltage, higher speed, and slower timings than DDR2. The chart below summarizes some of the differences in the official JEDEC DDR2 and DDR3 specifications.


JEDEC specs a starting point for enthusiast memory companies. However, since there was never a JEDEC standard for memory faster than DDR-400 then DDR memory running at faster speeds is really overclocked DDR-400. Similarly DDR2 memory faster than DDR2-800 is actually overclocked DDR2-800 since there is currently no official JEDEC spec for DDR2-1066. DDR speeds ran to DDR-400, DDR2 has official specs from 400 to 800, and DDR3 will extend this from 800 to 1600 based on the current JEDEC specification.

The Super Talent is the first DDR3 we have tested with a rated 1600 or higher speed. It also offers lower latency at 1600, 7-7-7 timings, than many of the speed ratings of the first DDR3 DIMMs at 1066. Super Talent DDR3 is available in three configurations:

Street prices are approximate selling prices at launch, since final prices for Super Talent memory are set by the resellers.