AMD thus brings four new CPUs into the server space: Both CPUs are still made on the "old" 90 nm SOI process. It seems that AMD's 65 nm investments are all focused on the desktop offerings as well as the newest K10 parts. 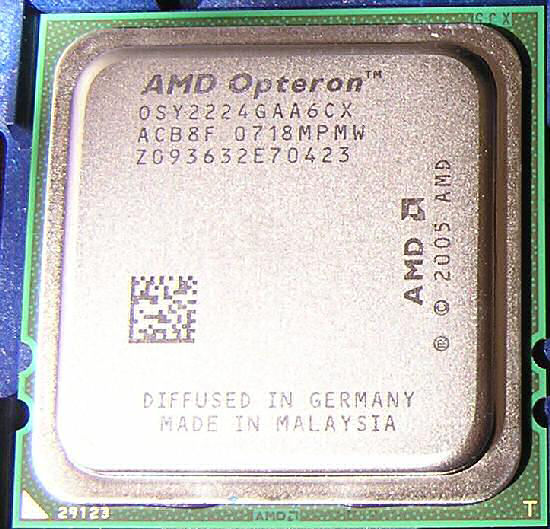 The Opteron 2224 package
To position AMD's new Opteron 2224 offering we take a look at the most interesting Intel and AMD CPUs at the current date.


So basically, AMD's 120W Dual core 3.2GHz Opteron has to prove that it is a worthy competitor to two Intel offerings: As Intel is offering twice as many cores at lower power consumption, it seems that it is already game over for AMD at first sight. However, this is not necessarily the case. First of all, not all workloads scale well from four to eight cores. Prime examples are the well known MySQL scaling problems, quite a few HPC applications, and even some Java applications. This might seem like a weird statement to the casual benchmark observer, but if you delve a bit deeper you'll find that some benchmarks use several (mostly four) instances running together to make scaling easier. Examples of such an approach are Sysbench, MySQL, and Specjbb2005.

This means that the software only has to make use of two CPU cores (eight cores needs four instances), which is a lot easier than making use of all eight cores in a single instance. This kind of "multi instance" benchmarking may reflect the way quite a few people and businesses use their servers, but at the same time such benchmarks can paint a picture that is far too optimistic for those people who are only running one application on their server.

Secondly, it might seem like a dual Opteron 2224 needs 80W more, but the reality is different. Intel's Northbridge consumes up to 20W more, and each FB-DIMM needs about 5W more than the DDR modules the AMD platform uses. So the difference is not as big as it might seem at first, something we have shown in a previous article. The AMD CPUs also scale back to 1GHz when running at idle, while the Intel CPUs run at 1.6 or 2GHz when idle. As a result the AMD platforms can consume less power when idle or at lower loads.