The NVIDIA Move: The GeForce 9400M

Every now and then some interesting hardware stuff happens in the Apple world and I get all excited because I get to merge Apple coverage with PC hardware coverage; yippee.

For the uninitiated here's a quick rundown of the basic silicon in a computer: you've got a CPU, a GPU, I/O and main memory, and they all need to talk to one another. The role of the chipset is to provide some basic logic for all of these parts to communicate with one another:

Over time, more and more functionality got integrated into the chipset. Sound, video and ethernet are all part of any modern day chipset. In some cases the chipset is a combination of two chips and in others it's all one single chip.

The GeForce 9400M is the mobile variant of the GeForce 9400 chipset, which just launched last week. It's a single chip chipset with integrated graphics, giving it an inherent advantage over Intel's solution: it requires less motherboard real estate.

Intel's G35, which was used in the previous generation MacBook and MacBook Pro is composed of the G35 GMCH and the ICH9M. The GMCH was built on a 90nm process while the ICH was actually built on a 130nm process. The chips worked just fine but they consumed too much power and took up much more real estate on the motherboard. In a desktop that's not a problem, but in a notebook you're more space constrained.

NVIDIA's chipset reduces the size of the motherboard but it also reduces power consumption. Intel's G35 was built on a 90nm and 130nm process as I just mentioned; while G45 is built on 65nm for the GMCH, the ICH is still 130nm (not 90nm as I originally assumed). NVIDIA's GeForce 9400M is a 65nm chip; with good power management it should be similar in power consumption to G45 if not lower.

NVIDIA's GeForce 9400M is smaller, consumes less power than G35 and at worst the same amount of power as G45, but on top of all of that it's a lot faster than anything Intel has to offer. Take a look at this chart from last week's GeForce 9300 review: 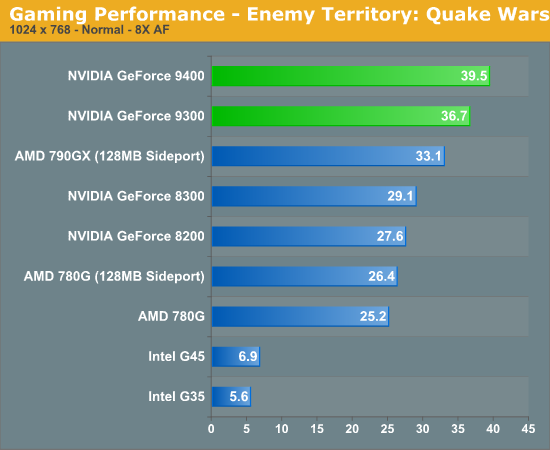 The GeForce 9400M is far from a hardcore gaming GPU; you can't run most new games at high quality settings and get smooth frame rates, but older games will actually run relatively well on this thing. A bunch of us still play Command & Conquer 3, and instead of setting up a bunch of systems we just game on laptops. The system requirements aren't tremendous but playing on anything with G35/G45 isn't exactly satisfying; the GeForce 9400M is enough to make that game look decent and play okay. And herein lies the biggest upgrade to the new MacBook and MacBook Pro: if you happen to have Windows loaded on these machines, the gaming performance of the integrated graphics is much improved. These aren't gaming machines but they are much better than before for less stressful titles. I'd suggest looking at the GeForce 9300 review for a good idea of where NVIDIA's gaming performance stands but you're basically looking at playability at 800 x 600 or 1024 x 768 depending on the detail settings of whatever title you're playing.

The GeForce 9400M, like Intel's GMA X3100 (the graphics core used in the previous generation MacBook), has no local framebuffer - instead it relies on carving out a portion of your system memory to use for its own needs. The GeForce 9400M uses the chipset's dual-channel DDR3-1066 memory controller, yielding around 17.1GB/s of memory bandwidth compared to the 10.7GB/s offered by the previous generation's dual-channel DDR2-667 memory controller.

GPU accelerated features of OS X such as Exposé and Coverflow aren't particularly processing power constrained as they ran just fine on the GMA X3100 used in the older MacBooks; memory bandwidth actually matters more here. Exposé feels slightly faster with 20 open windows on the new MacBook than on the old one; the animation is a tad smoother. The issue here is that the MacBook's resolution hasn't gone up, it's still stuck at 1280 x 800 - meaning the memory bandwidth requirements for smooth Exposé and Coverflow haven't changed. The same is true for things like Coverflow; at best it's marginally faster on the new MacBook.

Moving up to 40 windows, the gap between the GMA X3100 and the GeForce 9400M remains small but noticeable. But crank it up to 60 open windows and Exposé stutters on the GMA X3100 while it's still fairly smooth on the GeForce 9400M. I suspect this may be due to the 9400M having 256MB of system memory set aside for it compared to 144MB by the GMA X3100, although both should be able to grow their memory partition as needed without incurring a terrible penalty.

At 80 windows the GMA X3100 is unbearable when activating Exposé and both the MacBook's GeForce 9400M and the Pro's GeForce 9600M get choppy, but nowhere near as bad as the Intel solution. The 512MB GeForce 9600M will probably do a bit better with 80 windows but at 60 or less both of the NVIDIA solutions do well. With only a few windows open it's tough to tell the difference between the NVIDIA GPUs and the previous generation Intel offering, but keep a bunch of things open and you'll quickly appreciate the new mGPU.