The netbook market has exploded since its introduction; there are over 40 million netbooks out in the wild today, which is tremendous growth for what is essentially a new class of PC. With such a large number of mobile devices, it's only natural for companies like NVIDIA to look for ways to get a slice of the netbook pie. As a graphics company, NVIDIA is quick to point out how poorly Intel's IGPs perform, and the GMA 950 paired with Atom netbooks is particularly slow. As an alternative to Atom+GMA 950, NVIDIA created the ION platform, which would provide dramatically improved graphics along with HD video decoding. 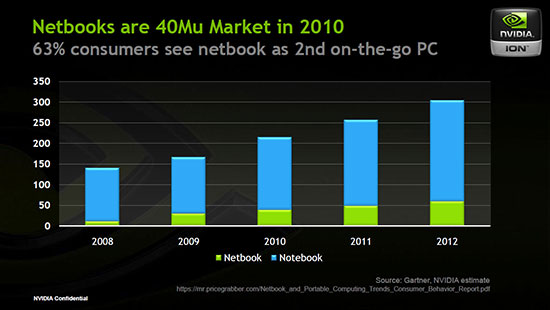 The first such implementation combined the GeForce 9400M chipset with an Atom N270/N280 for netbooks, or an Atom 330 for a nettop. A single-core Atom CPU is just barely able to handle 720p H.264 decoding on its own (with the CoreAVC codec—other less optimized codecs would still drop frames). 1080p support? Fahgeddaboutit! NVIDIA's ION nettops provided the necessary hardware to make a tiny HTPC box capable of handling Blu-ray playback, and the CPU and chipset are efficient enough that passive cooling isn't a problem.

On the netbook side, ION was a tougher sell. 1080p support is a nice bullet feature, but when most netbooks have 1024x600 LCDs, does HD support really matter? Plus, you would need an external USB Blu-ray drive to make it work. There's still gaming, and with Flash 10.1 (now at Beta 3) acceleration you can certainly make the argument that an ION netbook provides a superior user experience compared to stock Atom netbooks, but the caveats don't end there. NVIDIA stated that their chipset power requirements were "competitive" with Intel's chipset, but they appear to be taking performance into the equation. Our own numbers suggest that a good GMA 950+N280 solution is anywhere from 17% (H.264 decode) to over 35% (Internet surfing) more power efficient than the original ION—that's using the ASUS 1005HA and the HP Mini 311 as a point of reference. So you'd be stuck with less battery life but more features, with a higher price as well.

Things got quite a bit more complicated with the release of the Pine Trail platform and Pineview processors. Besides the fact that Pine Trail is even more power efficient (up to 70% more battery life relative to ION in Internet testing), Intel moved their IGP solution into the CPU package and eliminated the old FSB link. The Atom N450 links to the NM10 chipset with a proprietary DMI connection and NVIDIA doesn't make—and legally can't make—a compatible chipset, so using a non-Intel chipset with N450 simply isn't an option. The problem with Pine Trail is that HD video decoding remains difficult, unless you add a separate decoder chip, and gaming and other aspects of the user experience are still lackluster—N450 netbooks typically make do with Windows 7 Starter. Lucky for NVIDIA, they have some new technology called Optimus that makes all of this a moot point. 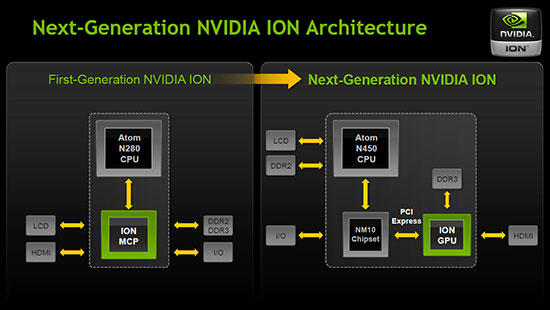 If you've got any math skills, you've probably already put two and two together to figure out what NVIDIA is announcing today. The Next Generation ION (NG-ION) platform consists of a Pineview netbook with a discrete graphics chip from NVIDIA, with Optimus allowing the GPU to switch on/off as needed. Note that there is no Optimus technology for nettop solutions, which will simply use an NVIDIA discrete GPU all the time. On a nettop that's always plugged in, NG-ION might use ~3W more power at idle, but that's not enough to worry about. There's also a benefit to just keeping things simple by using a standard discrete GPU.

Simplifying NG-ION like we just did is great for the layman, but there are plenty of other technical aspects to discuss that make things a bit more interesting. We don't have hardware for testing, so all we can pass along are NVDIA's performance information, but they make sense as we'll see in a moment. We'll also discuss some of the implementation specific details, expected availability, etc.