Pretty much all HDDs (and SSDs) are addressed using a scheme called Logical Block Addressing (LBA). The method is very, well, logical. Storage is addressed linearly, regardless of how the hardware itself is accessed. You start at LBA 0 and you go all the way up to the last address in your device. The number of LBAs you can address is a function of your hardware and the style of partition you’ve applied to your drive.

In use on all Itanium and Intel based Macs (among other systems) is GPT (GUID Partition Table), and a feature of GPT is 64-bit LBA support.

GPT drives are supported as data drives in all x64 versions of Windows as well as Mac OS X and Linux. Below we have some screenshots of creating a GPT drive in Windows and OS X: 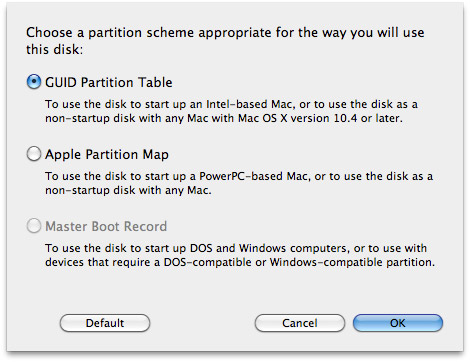 You’ll note that I said data and not boot drives. In order to boot to a GPT partition, you need hardware support. I just mentioned that your PC’s BIOS looks at LBA 0 for the MBR. Your BIOS does not support booting to GPT partitioned drives. GPT is however supported by systems that implement a newer BIOS alternative: Intel’s Extensible Firmware Interface (EFI).

Intel based Macs don’t use a BIOS and instead have an EFI which allows them to boot to GPT drives. Most PC motherboards however do not have EFI support, and those that do may have bugs associated with the implementation.

Case in point is Intel’s DX58SO, which just happens to be my default storage testbed. The good news is that Intel has deployed EFI on many of its motherboards. The bad news is the DX58SO (and potentially other models?) has some serious issues when you enable EFI.

The biggest problem I had was USB support dropping out completely when I enabled EFI on the Intel board. This is apparently a known issue and doesn’t affect all USB peripherals, but it prevented my keyboards and mice from working - which also meant that I couldn’t install Windows.

To make matters worse, even with EFI disabled I couldn’t get a 2TB partition created and installed to. The Windows 7 installer would simply complain that it couldn’t be installed to that drive.

There’s an odd bug with the DX58SO that lets you create a single 3TB partition with the SATA controller in Native IDE mode, and with that you can complete a full Windows 7 install. Note that in Native IDE mode you lose performance benefits like NCQ so it’s not ideal, but it’s the only way to get the drive with Windows installed on it. 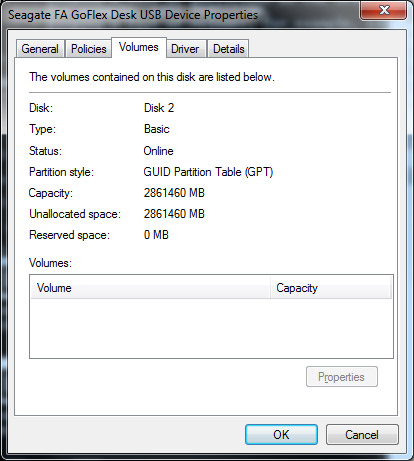 Intel is aware of the bug and is working on a solution. Apparently the DP55KG board should work perfectly fine but that didn’t help me in this situation. Update: Intel has since sent me a beta BIOS that addresses a number of these issues, I'm playing with it right now but it didn't make the cut for use in this review. Thankfully it looks like Intel is aware of the problem and is actively working on a solution. I've also asked Raja to pay closer attention to EFI support in his motherboard reviews going forward.

My experience with the Intel board and installing Windows with this 3TB Seagate drive pinpoints why we don’t have an internal drive option for the 3TB Barracuda XT: the hardware isn’t ready for it yet. Consumers are used to buying a new hard drive and just sticking it in their system. With the requirements for EFI and GPT, we’re going to need a lot more effort from the motherboard manufacturers and clear messaging from the drive makers to avoid a lot of confusion in the marketplace.