While AMD does not have a true SoC to combat the likes of Intel, NVIDIA, and ARM, this doesn’t mean they’re completely ignoring the market for the type of devices SoCs normally go in. Announced today at Computex 2011 and shipping immediately will be AMD’z Z series APUs, AMD’s formal entry into the modern tablet market.

While at this time it’s nigh-on impossible to get into a phone without a SoC (just ask Intel), tablets can be more forgiving. With a larger device and a larger battery, such devices don’t necessarily have the same extreme integration requirements and battery life requirements as a phone, even if the processors used in such devices are often the same. As a result of AMD’s current resources and technologies, it’s the tablet market that they have decided to go after first.

The Z-series, codename “Desna”, currently has a single APU that is shipping immediately: the Z-01.

The Z-01, as near as we can tell, is a power optimized version of AMD’s existing C-50 APU. It features the same dual-core CPU design, using a pair of Bobcat CPU cores running at 1GHz. The GPU meanwhile is a Radeon HD 6250, and while AMD hasn’t listed the clocks, we believe it’s clocked at the same 280MHz as in the C-50. We don’t have any information on whether AMD is using the same packaging for the Z-01 as they are the C series, but otherwise the available specifications are identical to the C-50 with one exception: TDP. While the C-50 is rated for 9W, the Z-01 is rated for 5.9W. Given the 33% power reduction, it’s a fair guess that AMD is binning Ontario chips to find ones that operate at the low voltages Z-01 would require.

Based on what we’ve seen with the C-50, the Z-01 should perform far above any other tablet processor. However the 5.9W TDP means that it’s not going to be in the same market as the likes of OMAP 4, Tegra 2, Apple’s A5, or even Intel’s Moorestown. All of these SoCs/platforms use well under 5.9W, and with the exception of Moorestown are all ARM based. 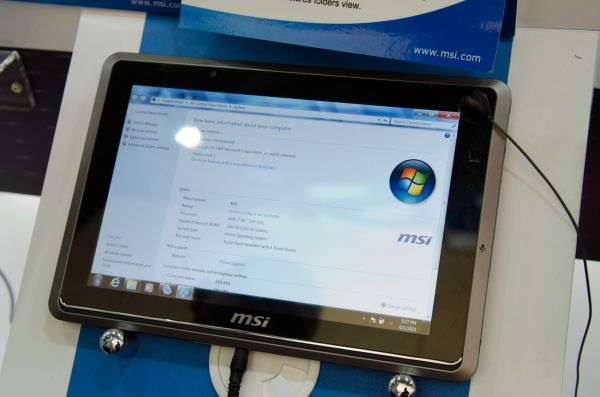 So what kind of tablets is AMD shooting for with the Z-01? The primary market is going to be full-fledged Windows 7 tablets, although Z-01 is capable of running the x86 branch of Android too. The first product will be the MSI Windpad 110W, which we actually saw earlier in the day before AMD’s announcement. The 110W is a 10” tablet running Windows 7 (Win7 Pro on the showfloor), which should retail for around $599.

Ultimately the biggest factor differentiating Z-01 tablets from ARM tablets is going to be Windows 7, given that a suitable version of Android is not yet available. Tablets like the 110W are going to be sold based on their ability to use applications like Microsoft Office, Windows Media Center, Windows games (that will run on a Radeon HD 6250 of course), and any other common Windows applications. So while devices like the iPad are based around media consumption, for Z-01 tablets AMD’s goals are more about a balance of consumption and creation, putting Z-01 tablets in a somewhat different market segment altogether.

We’ll have more on the Z-01 and the MSI Windpad 110W later this year once the tablet ships.