When we published our preliminary iPhone 4S performance results we pointed out that the current state of stock Android (2.3.x) browser performance is pretty bad. Google improved browser performance significantly in Honeycomb, and will likely bring those optimizations to smartphones with Ice Cream Sandwich due to be announced later today. As we all know, Google picks an SoC and a hardware vendor for each major Android release - giving them early access to code as they work on developing the next version of Android. For ICS the hardware partner is obviously Samsung, which puts Motorola at a bit of a disadvantage for today's Droid RAZR launch.

There is good news however. Based on our hands-on time with the Droid RAZR it appears that Motorola has updated its browser with the move to Android 2.3.5. Browsermark and Sunspider numbers are now in-line with Honeycomb based tablets as well as the iPhone 4S - perhaps a preview of what we can expect from Ice Cream Sandwich. Note that these are all numbers we've produced, including the 4S numbers (from our upcoming iPhone 4S review). 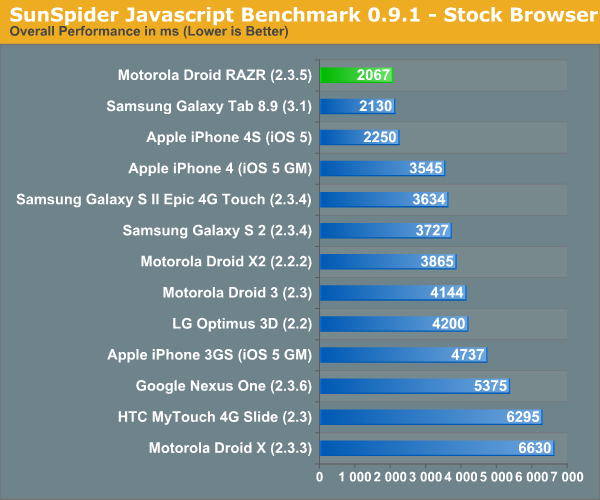 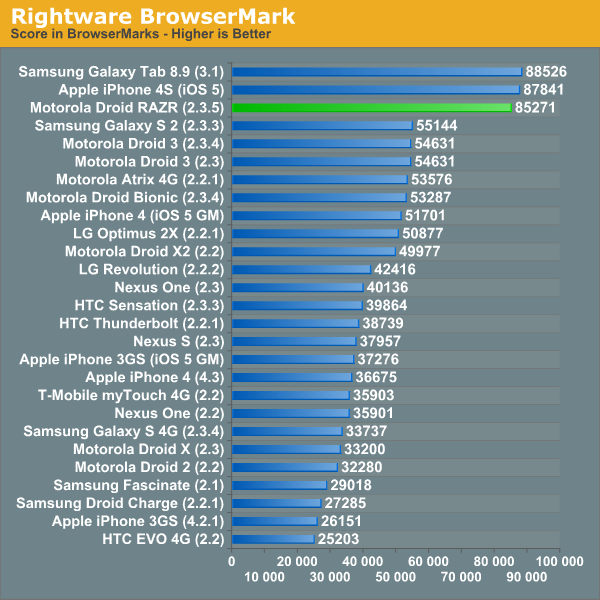 Obviously this is only measuring javascript performance and not the full web browsing experience (much less Flash), but it's definitely a step in the right direction. Once we get our hands on a review sample we'll dive much deeper into the performance of Motorola's 7.1mm 4G LTE smartphone.