The Toshiba Portege Z835 is No Sliver Queen

Ignoring my godawful joke of a headline, the Toshiba Portege Z835 is initially fairly impressive to behold. Toshiba uses a brushed aluminum aesthetic for almost the entire notebook, with a matching gray plastic bottom cover. Physically, the main body of the notebook doesn't flex at all; good news given the stunningly thin 0.63" profile. It really does look like a sliver, with only a bit of tapering around the top of the lid and the front of the body to keep it from looking boxy.

Unfortunately, while the body feels pretty firm, the Z835 absolutely gives up the ghost with the screen, lid, and hinges. The screen and lid are extremely thin, and the hinges are pretty wobbly. There's a tremendous amount of flex with the screen, enough to give me real pause. Screens on laptops are always a little flexy, but on the Z835 I feel like even my dire tyrannosaurus rex arms could snap it in half. The bezel also seems unusually wide on all sides, which is a bit of a disappointment after seeing the incredibly slender one used on Dell's XPS 14z. 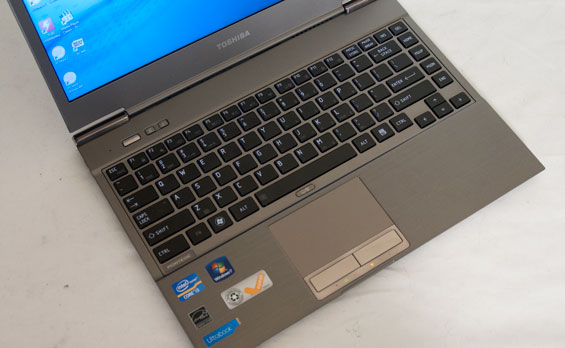 Other reviews have complained about the keyboard quality, but this isn't the worst keyboard I've seen from Toshiba, much less the industry. Toshiba's chiclet layout is usually pretty smart, but the one on the Z835 and its cousin, the R830, is literally an inch from greatness. Seriously, an inch on the y-axis: the keys are simply too short. When I look at the shell of the Z835, I can't help but feel like the keys could've been lengthened just a little bit. Travel also for the most part feels fine, but the keys are also fairly mushy. I don't think the keyboard is a lost cause, but it definitely needs to be revised. Layout is fine, just fix the overall size and quality. The chassis has room for both.

Thankfully the touchpad is extremely smooth and easy to use, and at least has a dedicated surface as opposed to being just part of the shell. The buttons feel a bit mushy and are made of the same cheap looking silver plastic as on the hinges, but they're definitely usable and this is far from the worst touchpad I've used. I have no problem navigating with it.

Finally, the bottom panel is held on by an embarassment of screws, and it bows a bit if you push on it. Even after removing all the screws I still couldn't remove the panel for fear of damaging the Z835, so if you're going to buy it, you'd better buy the configuration you want. There's a single vent for a fan that bubbles out a bit, but honestly I found the Z835 ran extremely cool anyhow.

Ultimately the Z835 looks pretty good and I'd dispute other reviews that call it out as looking too chintzy or cheap. The problem is that in places it does feel cheaper than you'd like, and I just don't like how much the top and bottom panels flex, especially the lid. Intel's $1,000 price point for ultrabooks is pretty pie-in-the-sky, and the sacrifices Toshiba had to make to beat it are evidence of that.