The 80 and 101 feature very different LCD panels, and their trade-offs leave neither with the perfect set-up. Each display is the dimmest of all the displays we’ve ever tested, with the 80 barely making it to 200 nits of brightness. The weak backlight doesn’t do any favors for the displays contrast either. 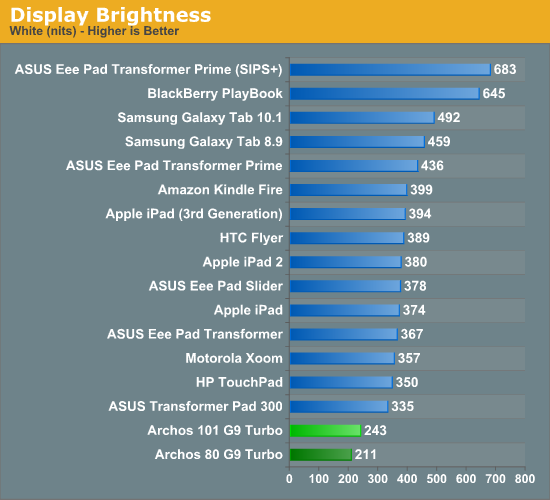 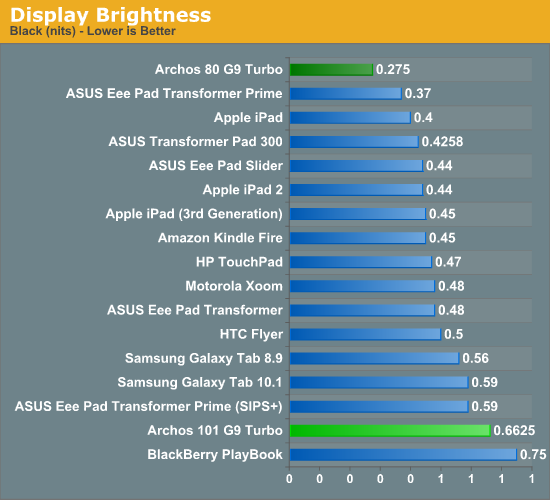 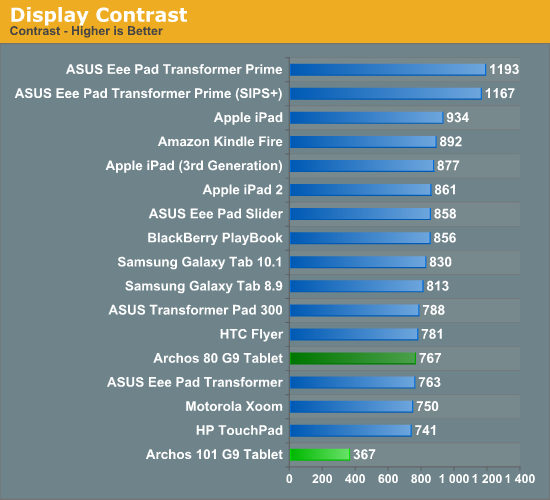 Color representation is good, though not even close to the new iPad nor the TF Prime. But in practice, something strange happens. The 10.1” display accounts very well for itself, distancing itself from it’s smaller kin in one very important way, viewing angles. When gaming or watching video on the 80, it is very easy to tilt the device in such a way that it’s very nearly totally washed out. The 101, on the other hand, seems to falter only slightly in viewing angles. The 80's behavior is irregular, too; viewed from the left or from above the display actually looks decent. Viewed from ever so slightly to the right or below and the colors become washed out and distorted.


At more than twice the brightness, the Galaxy Tab 10.1 outshines both Archos G9s outdoors.

I wish I could say at this point that the low brightness, passable color representation and less than ideal viewing angles were ultimately a non-issue. Unfortunately, in a tablet designed for media consumption, the display needs to be good, if not great. So, strike one for Archos. 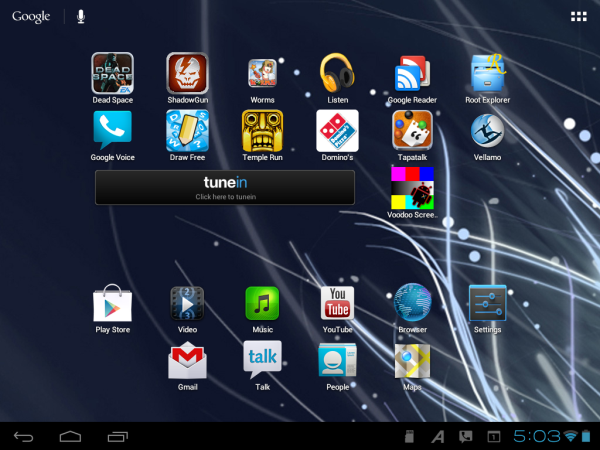 While the vast majority of tablet manufacturers have faltered in updating their previously released tablets to Android 4.0, Archos pushed an update to the entire G9 line this March. Part of their expedience was the lack of UI skinning. Their main focus in modifying the software was providing excellent codec and container support. Our media test suite is brutal, and gives most HTPC’s a run for their money, let alone most mobile devices. Overall, the G9s did very well, passing about half the tests, including some impressively esoteric container and codec combinations. Even subtitle and audio codec support was rather strong, and this tablet will suffice for nearly any DVD or Blu-Ray rip. A big stumbling block for the tablets was playing AVCHD content, which was blocky and stuttery; so digital camcorder aficionados shouldn’t expect to use this as a preview device. Windows Media Center fans will have to transcode their recorded television to alternate formats before playback on the G9, as both .wtv and .dvr-ms formats were incompatible. Lossless audio content in DTS-HRA and Dolby TrueHD formats were unplayable, though FLAC and DTS-MA work fine. 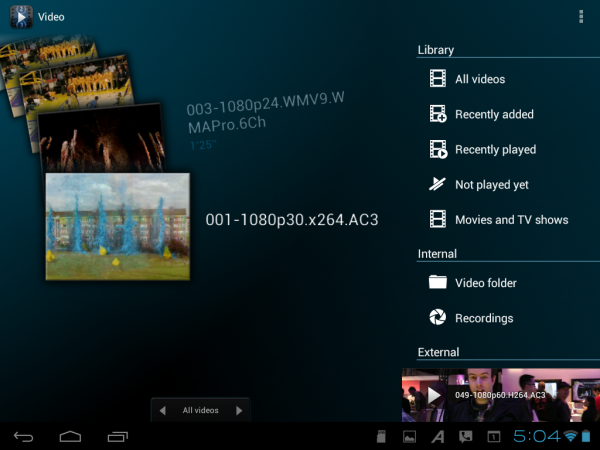 Truly, though, you’re not likely to find this sort of out of the box compatibility in any other mobile device; unfortunately, that experience isn’t quite out of the box. The most common video codecs for commercial media fall under the MPEG variants, and AC3, an analogue of Dolby Digital, is the most common audio codec. In order to play files encoded with MPEG or AC3 streams, you must first purchase a plug-in from the Archos Store for $10. The web store isn’t quite touch friendly so you’ll want to do this from your computer and then transfer the file to the tablet. As a device targeted at media consumption, shipping without MPEG and AC3 playback is a bit absurd, so consider this part of the cost of the device.
Gallery: Archos 80 G9 Turbo Software Screenshots
All of this playback happens through Archos Media Center (though the icon is labeled simply Video), using the Android Video Player yields more pedestrian results. The software has a good interface and quickly loads previews and features intuitive controls for changing audio tracks, subtitles and peeking at stream information. In testing the software would occasionally hang or crash all together. These hangs typically succeeded attempting to play an incompatible file so don’t expect to see that behavior regularly, only when you’re testing 60+ different video files.
Beyond the media playback capabilities, it’s all vanilla Ice Cream Sandwich. The interface is smooth and without hiccups, touch response was good on both tablets, and app switching was quick, though switching between larger apps could elicit some delay. In testing the tablets got a little irritable, occasionally prone to freezes and restarts, this is very atypical behavior though. In regular day to day use both tablets behaved quite well.
The Archos 80 and 101 G9 Turbo Performance
Tweet
PRINT THIS ARTICLE
Comments Locked