So, yes. They're back. Not long after our review of the Archos G9 tablets went live, we got wind from our commenters that Archos had released a new test firmware that brought the GPU clock to 384MHz. The news was surprising, but not entirely unexpected. We first got to run the G9 Turbos through their paces at CES when they were still running Honeycomb, so we had a baseline performance bar. When the tablets arrived for review with ICS loaded, one of the first things we noticed was that the GPU performance was well below what we expected.

Indeed, the numbers suggested the tablets might be clocked 25% below what we were told. So, we checked in with Archos USA, while trying to dig through logs to find a way to confirm the actual GPU clock. Our worst fear was that Archos had a thermal or electrical limitation that prevented them from using the full GPU clock speed while rendering 3D graphics, but were still quoting the high GPU clock for PR. Best case was that the GPU was clocked at 384MHz, but that another limitation (perhaps a memory bottleneck) prevented the performance we expected. Archos asserted that the advertised clocks were real, and so we went ahead with our review.

After seeing the comments, though, we checked in with Archos again, and wound up speaking with Marc de Courville, Archos Director of Software Engineering, and Francois Caron, an Archos R&D Engineer. As it turns out, the initial Android 4.0 firmwares that were distributed to the G9 Turbos had a clock dependency mistakenly included that pegged the GPU at just 266MHz. Both engineers were incredibly frank about the situation and were up front about their mistake. Their most recent firmware (4.0.6 TEST 4 by their nomenclature) has corrected the GPU clock, and the team is actually hard at work optimizing the GPU for even more performance.

We got a peek at the latest test build, and ran the tablets through their paces once again. Let's take a look at how things play out now.

Performance is now a few points above the Honeycomb build's throughput. So far so good. 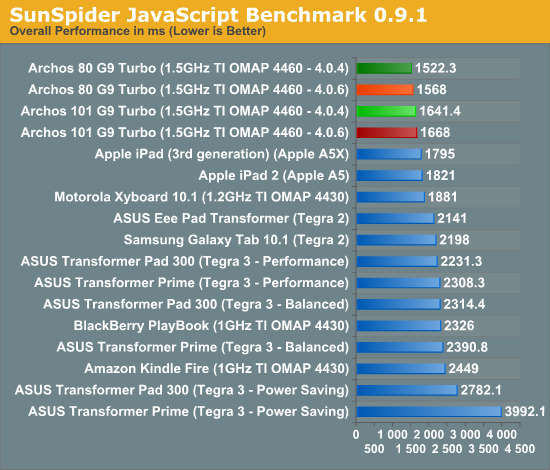 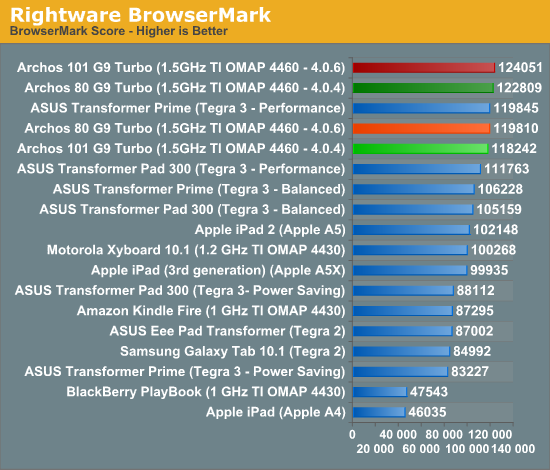 CPU performance tracks with the prior builds, no surprise there. 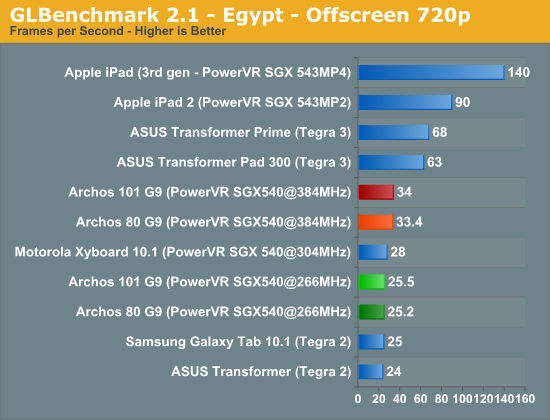 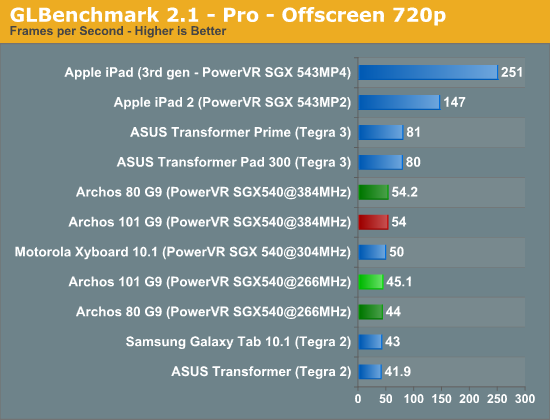 Here we see the performance we knew was waiting. Benchmarking isn't easy on mobile platforms right now, but GLBenchmark seems to be pretty reliable at stratifying GPU performance. This means, of course, that even with the 30% higher GPU clock the trusty SGX540 is still lagging its more potent competitors. 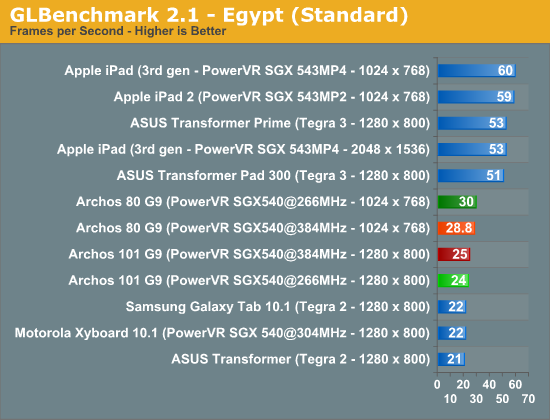 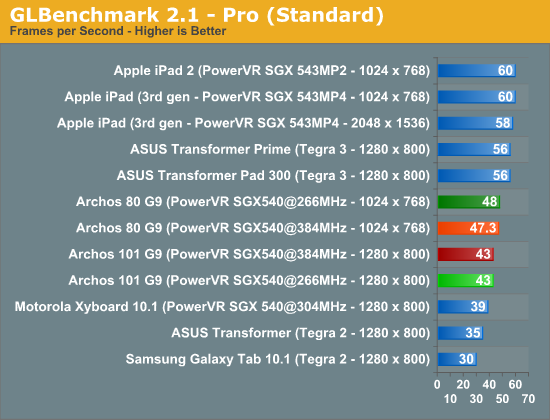 The Standard test runs at device resolution, and as such left us a little concerned. Performance was equivalent between the builds, apparently a result of some under the hood tweaks. Whatever the case, we found gaming performance at the screen resolution to be smooth and without visual artifact before, so this limitation shouldn't be too much worry. We'll dig a little further just to be sure. 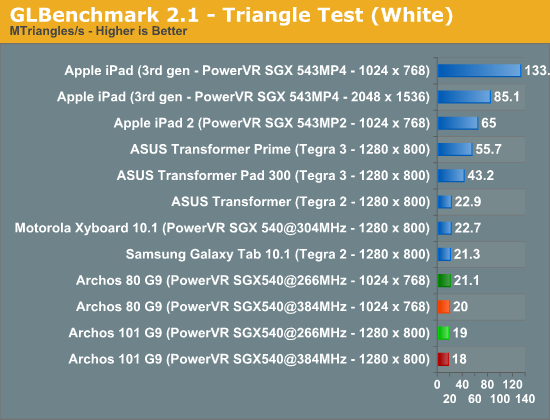 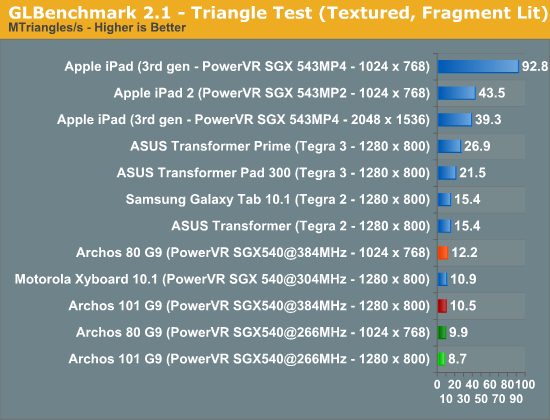 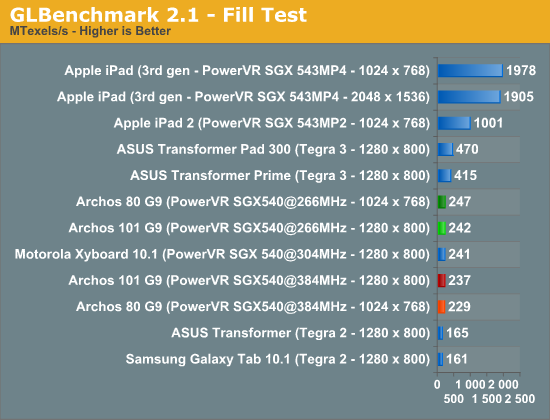 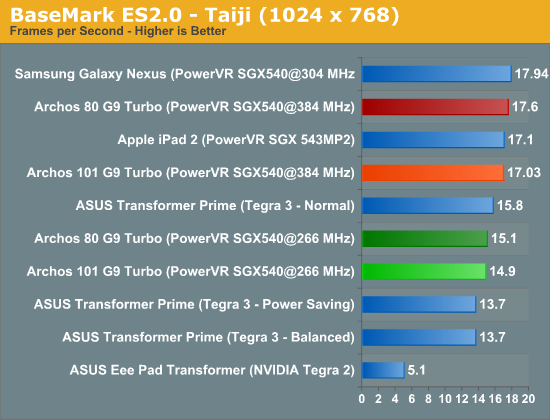 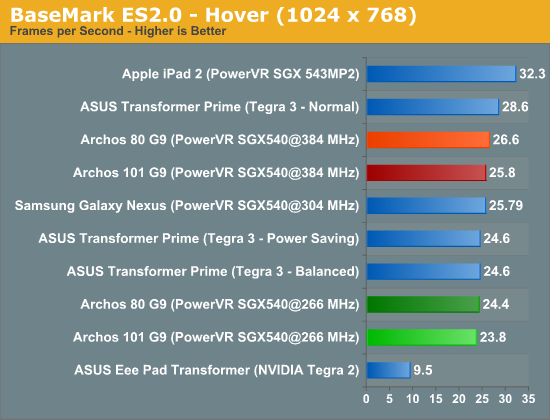 BaseMark results are a mixed bag, and are puzzlingly close to the Galaxy Nexus despite a 25% clock advantage. This could be related to the tweaks that held back the GLBenchmark Standard tests, but the results are at least consistently higher than the prior builds.

So, the gap between the old build and the test build jibes with what we expected. And though the performance improvement is a bit hit or miss, the new firmware bests the TF Prime and iPad 2 in some tests.

A full year on from the original G9 announcement, we expect to hear from Archos about their next generation of tablets soon. This leaves us to wonder, given the pending announcement, how long would Archos' software engineers be supporting the G9s? Marc was quick to answer that the G9 would get software updates through the next generation tablet's life cycle. With so many devices still waiting to be updated to Android 4.0, it's heartening to hear an OEM commit to actively supporting a device through its successor's life.

So, World's Fastest? Not quite, but it's much closer than before. All told, the properly clocked Archos G9 Turbo tablets do live up to expectations for the platform. Does this change our position on the tablets? No, not this. The GPU performance wasn't bad to begin with, just not what we expected. What does make us pause is the impressive commitment to providing timely software updates that Archos has demonstrated. Maintaining software parity across two generations of Android tablets is unprecedented, and we can only hope that other manufacturers take note of Archos' commitment to its customers. The Archos G9 tablets aren't the cheapest, they're not the sexiest, and they're not quite the fastest. But if Archos keeps their word, they'll be one of the best supported.