The ASUS BIOS is one that we have come to know and enjoy using, given its simplicity and ease-of-use.  Over my tenure at AnandTech I must have covered at least ten different Intel based ASUS BIOSes, but only one ever AMD ASUS BIOS.  Today we raise that figure to two with the F2A85-V Pro.  Despite this, users of Intel based ASUS graphical BIOSes will not see much difference visually to the Intel counterparts.

In terms of performance, the only issues I really had with the BIOS were temperature readings and memory settings.  The former is due to this weird thing that AMD processors seem to do – only show temperature values between 25C and 60C.  In the operating system this means that even if you ramp up the voltage, all of the temperature reading software sees values in this range.  Normally while overclocking I like to keep an eye on temperatures, in case they start hitting a limit.  60C is still fairly cool in overclocking scenarios, so I was surprised when I could keep ramping up the voltage with no discernable affect.  It could be a case of other software needing to hook better into the temperature sensors, but even ASUS’ own temperature control was showing this.  I personally found it a bit odd.  Regarding memory settings, we have options to set from default all the way up to DDR3-2400 MHz, and the processor is rated up to DDR3-1866 by AMD specifications – the system would randomly decide if DDR3-2400 was stable during testing, and as a result some of the initial tests were at 2400, and the rest are at 2133.  This is either indicative of the motherboard, or indicative of the memory controller in these processors not being geared to 2400 MHz (or I have a dud of a sample).   The last thing about performance I would like to mention is our voltage readings in OCCT, which were fairly erratic.  However I will cover that later in the review.

For the BIOS itself, our first screen presented is our easy mode: 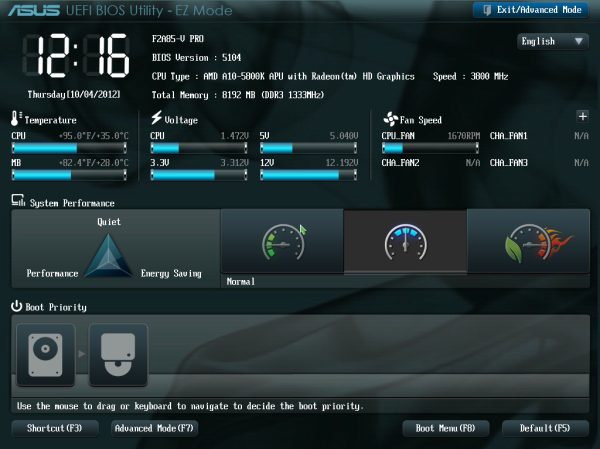 This screen has the majority of what we want when a user opens a BIOS – the name of the motherboard being used, the BIOS version, the CPU installed (with speed), memory installed (with speed), voltage readings, temperature readings, fan speed readings and a boot priority order.  I am very glad I have all of this to hand and it is easy to see.  The additions I would suggest are by having some of the objects clickable to various advanced options located deeper in the BIOS – such as clicking on the ‘Fan Speed’ heading takes us to the fan speed selection.  Now clearly ASUS’ way of showing a BIOS is different to that of other manufacturers that use an image of the motherboard as their front end BIOS screen and ask users to click on various parts to access settings.  The main difference between the two is essentially whether the companies want to decide if the user is interfacing with a product or a system, and whether that company wants the user to recognize this fact or not.  For an average user, obviously interfacing with the system as a whole makes much more sense – they are not too concerned if they are speaking with the motherboard, the CPU, the fan controllers or anything like that.  Some enthusiasts however would prefer the acknowledgement that they are talking or manipulating component A or component B within a system.  ASUS take this knowledge on board, and let the user interact with the whole of the product from the get-go without confusing users about where the SATA ports actually are. 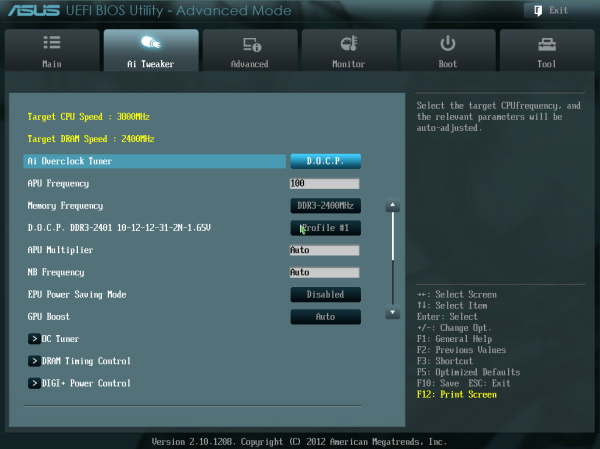 The main screen in the BIOS is the AI Tweaker section, designed to help users overclock the processor.  Our overclocking results are shown in our typical overclocking section, but it is important to note that for most overclocking scenarios for the user, all we need to do is adjust voltage and CPU frequency.  In the F2A85-V Pro, our first option is to select what type of overclocking we want – Auto (none), Manual, or D.O.C.P.  We have encountered D.O.C.P. before on AMD boards, and the quick explanation is ‘a BIOS hack to get XMP to work’.  Remember that XMP is an Intel standard, so these motherboard manufacturers have worked out a way to parse that information in an AMD system.  By selecting DOCP, the system will adjust the memory ratio, the APU frequency (if required) and the memory sub-timings/voltages to the XMP profile of the kit.  In some circumstances this may produce a CPU overclock, so ensure that that CPU frequency is where you would want it as well.

Selecting Manual for our overclock gives us options to adjust the APU Frequency (i.e. the BUS speed / BCLK), the memory frequency, the APU multiplier, the NB Frequency, EPU Power saving modes, and the GPU frequency.  Each option has an associated explanation on the right hand side telling the user of what the option does and what values are applicable.  Underneath these settings are the ASUS OC Tuner (which applies a fast overclock), our DRAM timing screens, DIGI+ Power control and voltages. 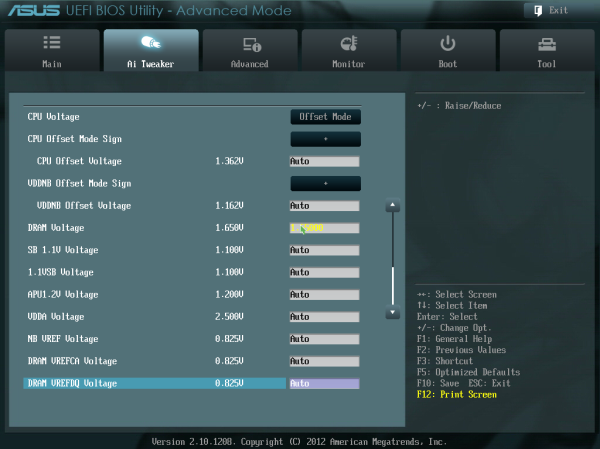 The main voltages for the APU can be adjusted either by an offset or as an absolute value – the rest are changed via absolute values.

Shots of the Memory and DIGI+ sections: 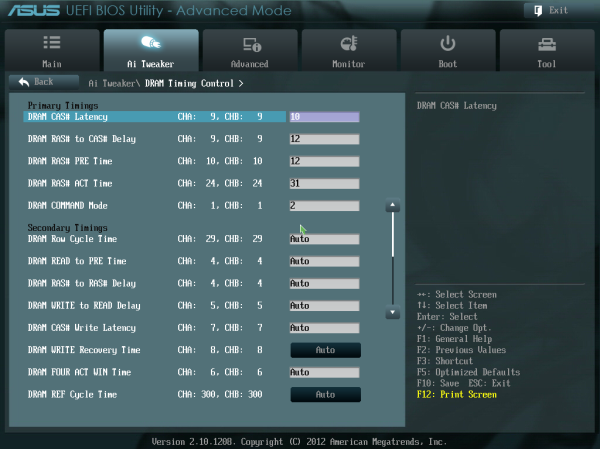 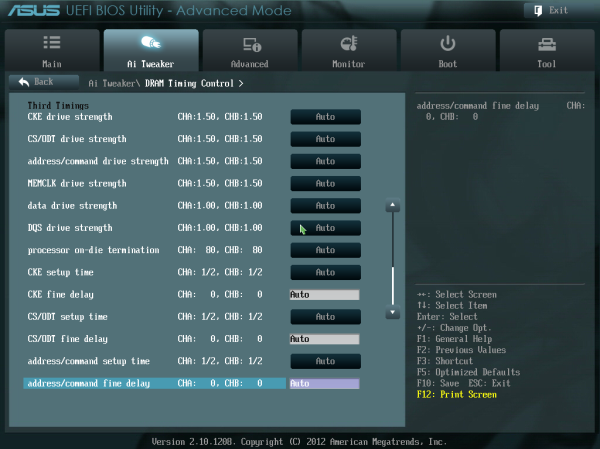 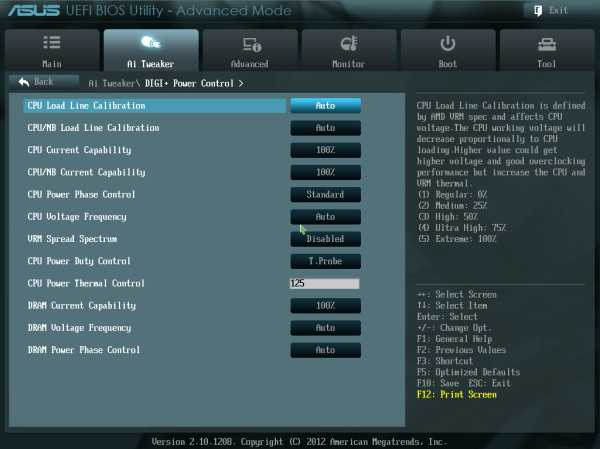 Also in the BIOS are our advanced options which give access to the CPU, SATA, USB, NB and onboard devices.  By default our SATA ports are on AHCI which is good, but it is also important to note that each USB port on board can be enabled and disabled through these options: 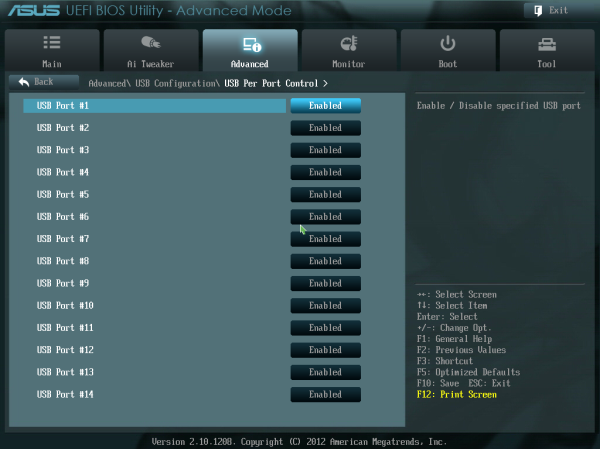 Fan controls are situated in the Monitor section of the BIOS, where this area also shows the important temperatures, fan speeds and voltages. Each of the fan headers on the F2A85-V Pro can be controlled independently, and ASUS give us the option of a low speed limit and a profile to select aggressiveness in the ramping of the fans.  The OS software is a lot better to use for fan control than the OS options in this regard. 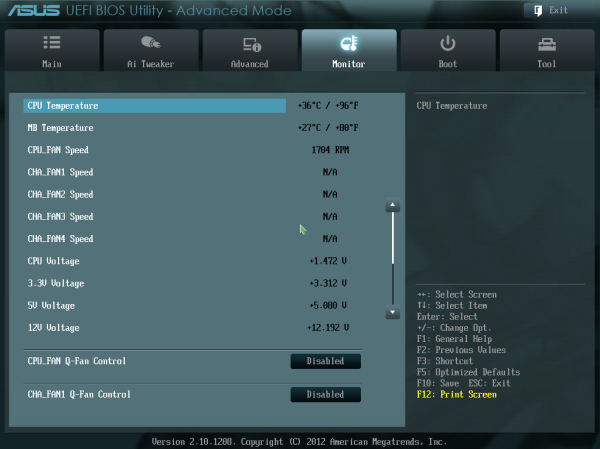 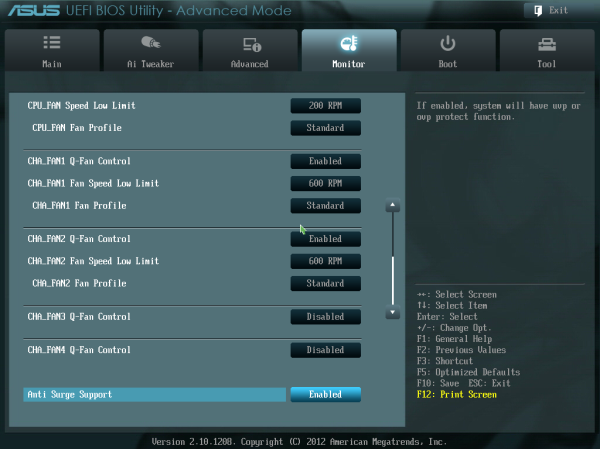 Also in the BIOS we have the EZ-Flash utility for updating the BIOS, SPD information to confirm the memory is the memory purchased, and an option to save up to eight OC profiles. 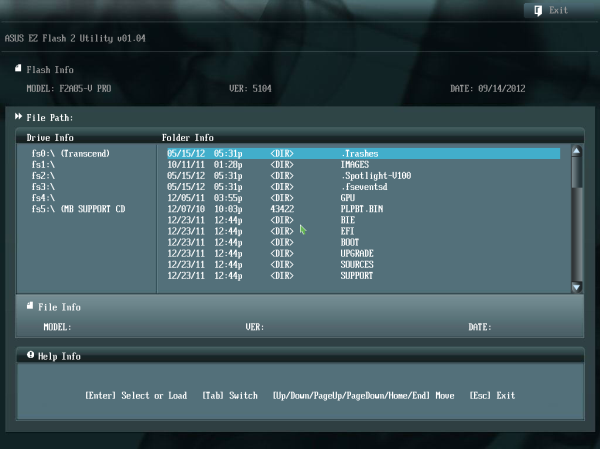