Inside the new Chromebook

Similar to its predecessors, getting access to the internals of the new Chromebook doesn't require anything more than a tiny Phillips head screwdriver. There are four exposed screws and four more under the feet beneath the chassis. Remove all eight screws and you can pry off the bottom cover. The cover snaps into place so be careful if/when you remove it. 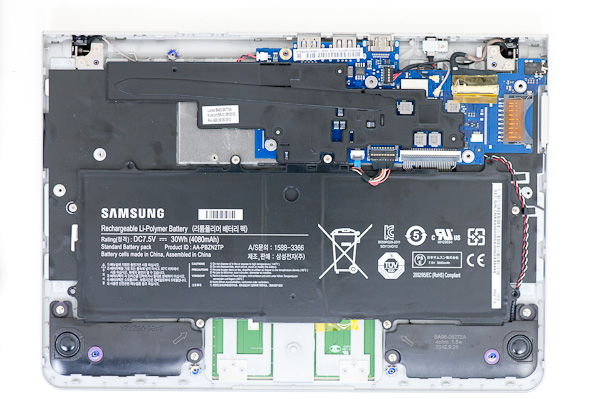 The new ARM based Chromebook

Inside the new Chromebook is a far more simplified setup. It honestly looks more like a modern day tablet under the hood. I never got the Celeron based Chromebook 550, but I do have the 500 which featured a dual-core Atom N570 processor. Here's a shot of that model for comparison: 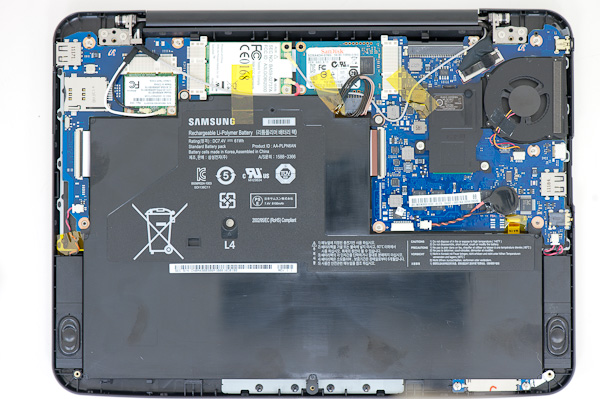 The old Atom N570 based Chromebook

Right off the bat you'll notice a significant reduction in battery capacity. That old N570 based Chromebook had a mammoth 61Wh battery compared to the more tablet-sized 30Wh battery in the new model.

The old motherboard was also far less integrated. Discrete cards were used to provide cellular and WiFi connectivity, whereas the new board integrates WiFi (Marvell?) directly onto the motherboard.

The cost reduction extends to the SoC side as well. Intel charges $86 for an Atom N570, while the going rate for high-end ARM based SoCs is in the $20 - $30 range (and this is why ARM is the new AMD when it comes to keeping Intel pricing in check). I also suspect that this first run of Samsung Exynos 5 Dual chips are a bit leakier and perhaps even lower yielding than what we'll eventually see down the road. Samsung could be motivated to move these parts at a better cost structure as they work out kinks in manufacturing. 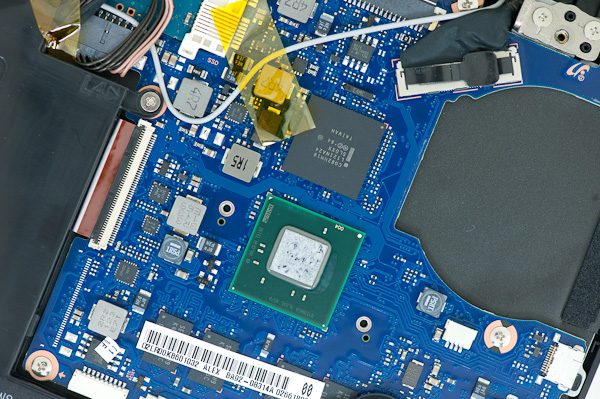 Note that the previous Atom solution required two chips: the N570 and its NM10 Express PCH. The N570 had a 2.1W TDP and was used for all IO, while the N570 and its two Atom cores needed about 8.5W. The combination was fine for a notebook but when Haswell can deliver much better performance within the same TDP, it's clear the old 45nm CPU + chipset were getting long in the tooth. 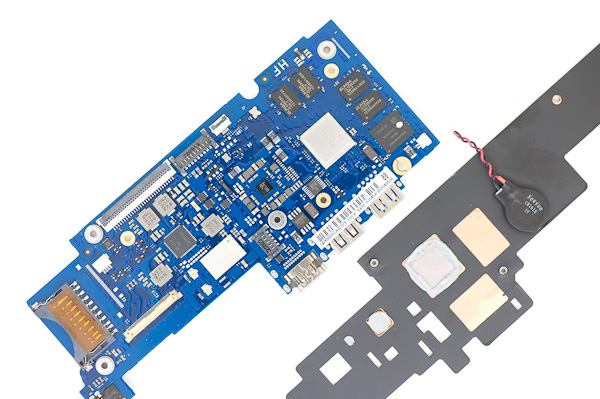 Despite the absence of any significant heatsink, to remove 10.6W of heat you do need forced air convection hence the inclusion of a fan in the old Chromebook 500. The thermal requirements of the Exynos 5 Dual are significantly lower. The SoC benefits from Samsung's 32nm HK+MG LP process and is highly integrated, meaning there's only a single chip. Although there's a big heatspreader plate complete with heatpipe that runs over the Exynos 5, there's no fan needed. Removing the fan lowers build cost, reduces internal complexity, and helped Samsung shrink the chassis size. 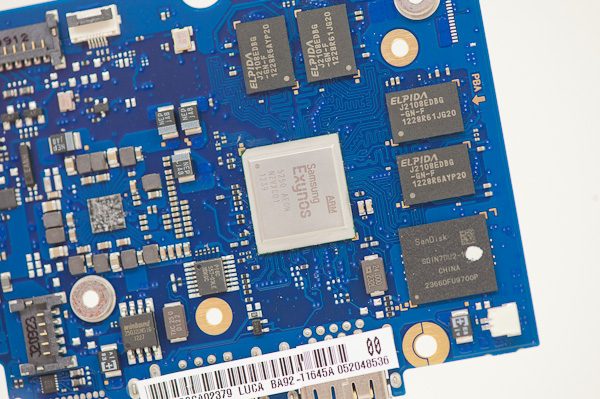 There are a total of 8 x 256MB DDR3L devices (2GB total) that surround the Exynos 5 Dual SoC (4 on each side of the PCB). Each device is 8-bits wide, all connecting up to the 64-bit wide DDR3L memory controller. The DRAM is clocked at a 1600MHz data rate, resulting in 12.8GB/s of memory bandwidth to the chip. The Exynos 5 Dual integrates two ARM Cortex A15 CPU cores as well as an ARM Mali-T604 GPU.

The other big change on the motherboard is the move from a SanDisk discrete controller + NAND device to an integrated iNAND solution for storage. Capacity remains unchanged at 16GB, but the integrated eMMC controller does offer board (and perhaps cost) savings. 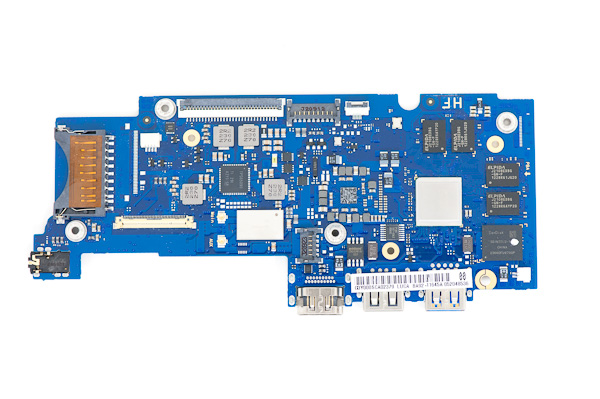 Moving to a lower power SoC not only gave Samsung some flexiblity in cooling, it also allowed it to run the platform with a much smaller battery. While the old Chromebook 500 used a massive 61Wh battery, the new model only needs a 30Wh unit. Battery life has gone down (Exynos 5 Dual isn't 2x more power efficient than the 45nm Atom N570) but so has weight as well. I believe the Chromebook 550 ditched the giant battery and moved to a ~40Wh unit, so the difference isn't as drastic there.