What does "general use" mean, anyway?

In the past, I've often differentiated between home and office computers. Home computers were more geared towards media usage, from consuming web pages to editing photos. They could often cost less because of less emphasis on highest-quality, most reliable components. Office computers were more aimed at office suite productivity. They'd usually cost more because they included higher-quality, more reliable components.

Now, I consider this distinction all but extinct. In my experience, more people are doing productivity work at home (such as in the case of telecommuters), and more office productivity work necessitates working with media. For example, when I was an undergraduate, I produced papers. Now that I'm an instructor, I have my students produce videos to post on YouTube and Facebook. In other words, as the web matures, we're communicating with our friends, family, and business associates/colleagues in many more ways than traditional text. Furthermore, PC hardware is always becoming cheaper (aside from anomalies like the Southeast Asia floods that affected hard drive prices). This means that unless your PC is mission critical and you need enterprise-grade hardware, you can buy high-quality, reliable components for not much more (absolute) cost than bottom-barrel bare adequacy parts. 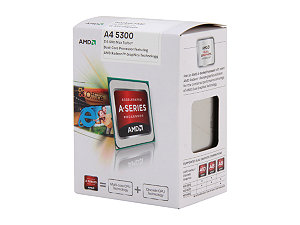 Make no mistake—the AMD A4-5300 APU is not an enthusiast's chip. However, it is a capable and cheap processor for basic usage desktop computers. Currently priced around $53, the A4-5300 is in competition with Intel's Sandy Bridge-based Celeron CPUs. I've had an Intel G550 system sitting next to an AMD A4-5300 system for the last week in my lab, and it's impossible to tell the difference between them in day-to-day usage. Both offer "good enough" computing for watching YouTube videos, checking Facebook, and making a PowerPoint presentation. Both choke on more advanced tasks like 3D anatomical model rendering. But most people aren't rendering models of skeletons—they're watching YouTube.

Compared to an Intel Sany Bridge Celeron system, an AMD A4-5300 desktop also pulls about the same amount of power under general use. The AMD APU's main advantage is its on-die graphics. You can play less demanding titles like Left 4 Dead at 720p at acceptable frame rates on an AMD APU, whereas you can't on the Intel Celeron. Any software that supports OpenCL acceleration like WinZIP is also noticeably faster on the AMD APU. Adobe's CS 6 now has many features that support OpenCL acceleration, such as certain filters in Photoshop. Whether these advantages are relevant is something you should consider, because the Intel platform has a clear advantage in upgradeability and potential longevity. Intel's LGA 1155 can be upgraded all the way up to Ivy Bridge quad-cores. Though AMD states FM2 will support the next (third) generation APUs, it is highly unlikely that those next-gen chips will approach the CPU prowess of Intel's current mainstream high-end processors.

If you've read my previous guides you'll know that I am a big fan of both Fractal Design's Core 1000 and NZXT's Source 210 cases in the budget market segment. Both cases are relatively well-built (they lack sharp edges for one plus!), and I think both look nice. The primary difference is that the Source 210 is larger and heavier, with more room for active cooling (you can install more fans). I like it more for budget gaming builds that will produce more heat and are used in settings where noise is usually more tolerable. For office builds, I like the Core 1000 because it is smaller and lighter, so it gets the nod here.

As for the power supply, I strongly recommend using higher-quality units like the SeaSonic SS-300ET listed here. The power supply is arguably the most important component in a computer, if for no other reason than a spectacularly defective unit can destroy the other components! The Antec Earthwatts 380W and NeoEco 400W, as well as Corsair's Builder Series 430W, are also better than average lower-wattage models that frequently go on sale.

We're pairing the the A4-5300 APU with ASRock's FM2A55M-DGS motherboard. It's a no-frills, solid performing, inexpensive microATX board. It lacks niceties like HDMI but has a low price tag. I've used a handful of these in builds now and have been very pleased with the board's layout and that all have been rock solid stable. Trinity APUs benefit from higher-speed DDR3 RAM in certain usage scenarios (namely gaming), so we suggest spending a few dollars more on DDR3-1600 RAM over DDR3-1333 RAM. The specific G.Skill kit listed is a reliable overclocker, too. Of the eight kits I've installed in systems, all reached DDR3-1866 speeds (though two kits required the voltage to be upped to 1.6V to be stable, and as always with overclocking, your mileage may vary).

For storage, making specific recommendations for budget builders is currently quite difficult because of how frequently both HDD and SSD prices are changing. But whether you want an HDD or SSD depends on your usage, not prices. Simply put, if you need more than 64-128GB of local storage, you will need to buy a higher-capacity but much slower-performing HDD. If you will not need much local storage, you can go with a very fast SSD. As for HDDs, keep in mind that any HDD can fail, and brand choice is mostly a matter of personal preference. Watch prices, and pay attention to warranty lengths. For SSDs, Samsung's 830 Series, Crucial's M4 Series, Plextor's M5S Series, and Intel's 330 Series have excellent reputations for reliability in the budget SSD market. I've seen all of these drives in the 60/64GB capacity for $50 recently, so again, keep your eyes on prices and watch for sales.

Regarding the operating system, Windows 7 remains the industry standard. A comparison of Windows 7 with the very recently released Windows 8 is outside the scope of this article, but note that Windows 8 costs a bit less, so if you're looking to shave a few dollars off the cost of your build, you can do so by going with W8 instead of W7. Incidentally, our full Windows 8 writeup is forthcoming, but to say that opinions are split on the OS would be an understatement.

Check the next page for our HTPC build.