Intel Brings Core Down to 7W, Introduces a New Power Rating to Get There: Y-Series SKUs Demystified

by Anand Lal Shimpi on January 14, 2013 12:56 AM EST
56 Comments | Add A Comment
56 Comments
For all of modern Intel history, it has specified a TDP rating for all of its silicon. The TDP rating is given at a specific max core temperature (Tj_MAX) so that OEM chassis designers know how big to make their cases and what sort of cooling is necessary. Generally speaking, anything above 50W ends up in some form of a desktop (or all-in-one) while TDPs below 50W can go into notebooks. Below ~5W you can go into a tablet (think iPad/Nexus 10), and below 2W you can go into a smartphone. These are rough guidelines, and there are obviously exceptions.
With Haswell, Intel promised to deliver SKUs as low as 10W. That's not quite low enough to end up in an iPad, but it's clear where Intel is headed. In a brief statement at the end of last year, Intel announced that it would bring a small amount of 10W Ivy Bridge CPUs to market in advance of the Haswell launch. At IDF we got a teaser that Intel could hit 8W with Haswell, and given that both Haswell and Ivy Bridge are built at 22nm with relatively similar architectures it's not too far of a stretch to assume that Ivy Bridge could also hit a similar power target. Then came the CES announcement: Intel will deliver 7W Ivy Bridge SKUs starting this week. Then came the fine print: the 7W SKUs are rated at a 10W or 13W TDP, but 7W using Intel's Scenario Design Power (SDP) spec. Uh oh.
Let's first look at the new lineup. The table below includes both the new Y-series SKUs as well as the best 17W U-series SKUs:
Compared to a similarly configured U-series part, moving to a Y-series/7W part usually costs you 200MHz in base clock, ~250MHz in max GPU clock, and 200 - 300MHz in max turbo frequency. Cache sizes, features and Hyper Threading are non-negotiable when going between U and Y. The lower clocks are likely the result of lower operating voltages and a side effect of the very low leakage binning. The cost of all of this? Around an extra $30 over a similar U-SKU. That doesn't sound like much but when you keep in mind that most competing ARM based SoCs sell for $30 themselves, it is a costly adder from an OEM's perspective.
Now the debate.
Intel should have undoubtedly been very specific about 7W being an SDP distinction, especially when the launch slide compared it to TDPs of other Intel parts. Of course Intel failed to do this, which brought on a lot of criticism. To understand how much of the criticism was warranted we need to first understand how Intel comes up with a processor's TDP and SDP ratings.
Intel determines a processor's TDP by running a few dozen workloads on the product and measuring thermal dissipation/power consumption. These workloads include individual applications, multitasking workloads (CPU + GPU for example) and synthetic measures that are more closely related to power viruses (e.g. specifically try to switch as many transistors in parallel as possible). The processor's thermal behavior in all of these workloads ends up determining its TDP at a given clock speed.
Scenario Design Power (SDP), on the other hand, is specific to Intel's Y-series SKUs. Here Intel takes a portion of a benchmark that stresses both the CPU and GPU (Intel wouldn't specify which one, my guess would be something 3DMark Vantage-like) and measures average power over a thermally significant period of time (like TDP, you're allowed to violate SDP so long as the average is within spec). Intel then compares its SDP rating to other, typical touch based workloads (think web browsing, email, gaming, video playback, multitasking, etc...) and makes sure that average power in those workloads is still below SDP. That's how a processor's SDP rating is born.
If you run a power virus or any of the more stressful TDP workloads on a Y-series part, it will dissipate 10W/13W. However, a well designed tablet will thermally manage the CPU down to a 7W average otherwise you'd likely end up with a device that's too hot to hold.
Intel's SDP ratings will only apply to Y-series parts, the rest of the product stack remains SDP-less. Although it debuted with Ivy Bridge, we will see the same SDP ratings applied to Haswell Y-series SKUs as well. Although Y-series parts will be used in tablets, there are going to be some ultra-thin Ultrabooks that use them as well. In a full blown notebook there's a much greater chance of a 7W SDP Ivy Bridge hitting 10W/13W, but once again the burden falls upon the OEM to properly manage thermals to deliver a good experience.
The best comparison I can make is to the data we saw in our last power comparison article. Samsung's Exynos 5 Dual (5250) generally saw power consumption below 4W, but during an unusually heavy workload we saw it jump up to nearly 8W. While Samsung (and the rest of the ARM partners) don't publicly specify a TDP, going by Intel's definition 4W would be the SoC's SDP while 8W would be its TDP if our benchmarks were the only ones used to determine those values.
Ultimately that's what matters most: how far Intel is away from being able to fit Core into an iPad or Nexus 10 style device. Assuming Intel will be able to get there with Ivy Bridge is a bit premature, and I'd probably say the same thing about Haswell. The move to 14nm should be good for up to a 30% reduction in power consumption, which could be what it takes. That's a fairly long time from now (Broadwell is looking like 2H-2014), and time during which ARM will continue to strengthen its position. 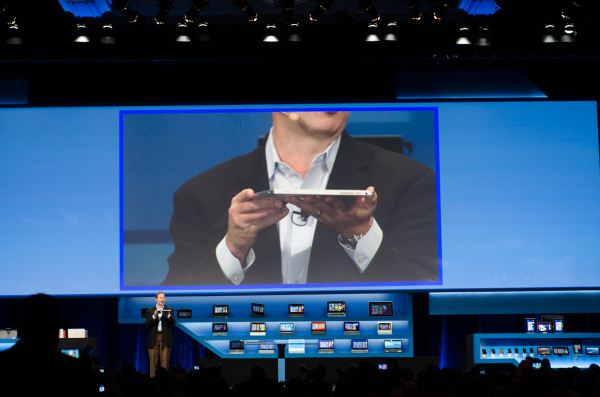 Acer's W700 refresh, with 7W SDP Ivy Bridge in tow
As for whether or not 7W SDP parts will actually be any cooler running than conventional 10W/13W SKUs, they should be. They will run at lower voltages and are binned to be the lowest leakage parts at their target clock speeds. Acer has already announced a successor to its W700 tablet based on 7W SDP Ivy Bridge with a 20% thinner and 20% lighter chassis. The cooler running CPU likely has a lot to do with that.
Then there's the question of whether or not a 7W SDP (or a future 5W SDP Haswell/Broadwell) Core processor would still outperform ARM's Cortex A15. If Intel can keep clocks up, I don't see why not. Intel promised 5x the performance of Tegra 3 with a 7W SDP Ivy Bridge CPU. Cortex A15 should be good for around 50% better performance than Cortex A9 at similar frequencies, so there's still a decent gap to make up.
At the end of the day, 7W SDP Ivy Bridge (and future parts) are good for the industry. Intel should have simply done a better (more transparent) job of introducing them.
Tweet
PRINT THIS ARTICLE
Comments Locked