The launch of the Kepler family of GPUs in March of 2012 was something of a departure from the normal for NVIDIA. Over the years NVIDIA has come to be known among other things for their big and powerful GPUs. NVIDIA had always produced a large 500mm2+ GPU to serve both as a flagship GPU for their consumer lines and the fundamental GPU for their Quadro and Tesla lines, and have always launched with that big GPU first.

So when the Kepler family launched first with the GK104 and GK107 GPUs – powering the GeForce GTX 680 and GeForce GT 640M respectively – it was unusual to say the least. In place of “Big Kepler”, we got a lean GPU that was built around graphics first and foremost, focusing on efficiency and in the process forgoing a lot of the compute performance NVIDIA had come to be known for in the past generation. The end result of this efficiency paid off nicely for NVIDIA, with GTX 680 handily surpassing AMD’s Radeon HD 7970 at the time of its launch in both raw performance and in power efficiency.

Taped out later than the rest of the Kepler family, GK110 has taken a slightly different route to get to market. Rather than launching in a consumer product first, GK110 was first launched as the heart of NVIDIA’s Tesla K20 family of GPUs, the new cornerstone of NVIDIA’s rapidly growing GPU compute business. 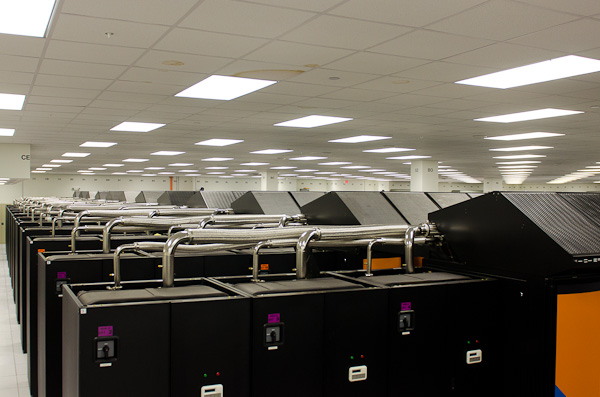 Or perhaps as it’s better known, the GPU at the heart of the world’s fastest supercomputer, Oak Ridge National Laboratory’s Titan supercomputer.

The Titan supercomputer was a major win for NVIDIA, and likely the breakthrough they’ve been looking for. A fledging business merely two generations prior, NVIDIA and their Tesla family have quickly shot up in prestige and size, much to the delight of NVIDIA. Their GPU computing business is still relatively small – consumer GPUs dwarf it and will continue to do so for the foreseeable future – but it’s now a proven business for NVIDIA. More to the point however, winning contracts like Titan are a major source of press and goodwill for the company, and goodwill the company intends to capitalize on.

With the launch of the Titan supercomputer and the Tesla K20 family now behind them, NVIDIA is now ready to focus their attention back on the consumer market. Ready to bring their big and powerful GK110 GPU to the consumer market, in typical NVIDIA fashion they intend to make a spectacle of it. In NVIDIA’s mind there’s only one name suitable for the first consumer card born of the same GPU as their greatest computing project: GeForce GTX Titan.

GeForce GTX Titan: By The Numbers

At the time of the GK110 launch at GTC, we didn’t know if and when GK110 would ever make it down to consumer hands. From a practical perspective GTX 680 was still clearly in the lead over AMD’s Radeon HD 7970. Meanwhile the Titan supercomputer was a major contract for NVIDIA, and something they needed to prioritize. 18,688 551mm2 GPUs for a single customer is a very large order, and at the same time orders for Tesla K20 cards were continuing to pour in each and every day after GTC. In the end, yes, GK110 would come to the consumer market. But not until months later, after NVIDIA had the chance to start filling Tesla orders. And today is that day.

Much like the launch of the GTX 690 before it, NVIDIA intends to stretch this launch out a bit to maximize the amount of press they get. Today we can tell you all about Titan – its specs, its construction, and its features – but not about its measured performance. For that you will have to come back on Thursday, when we can give you our benchmarks and performance analysis.

Diving right into things then, at the heart of the GeForce GTX Titan we have the GK110 GPU. By virtue of this being the 2nd product to be launched based off the GK110 GPU, there are no great mysteries here about GK110’s capabilities. We’ve covered GK110 in depth from a compute perspective, so many of these numbers should be familiar with our long-time readers.

For Titan NVIDIA will be using a partially disabled GK110 GPU. Titan will have all 6 ROP partitions and the full 384bit memory bus enabled, but only 14 of the 15 SMXes will be enabled. In terms of functional units this gives Titan a final count of 2688 FP 32 CUDA cores, 896 FP64 CUDA cores, 224 texture units, and 48 ROPs. This makes Titan virtually identical to NVIDIA’s most powerful Tesla, K20X, which ships with the same configuration. NVIDIA does not currently ship any products with all 15 SMXes enabled, and though NVIDIA will never really explain why this is – yield, power, or otherwise – if nothing else it leaves them an obvious outlet for growth if they need to further improve Titan’s performance, by enabling that 15th SMX. 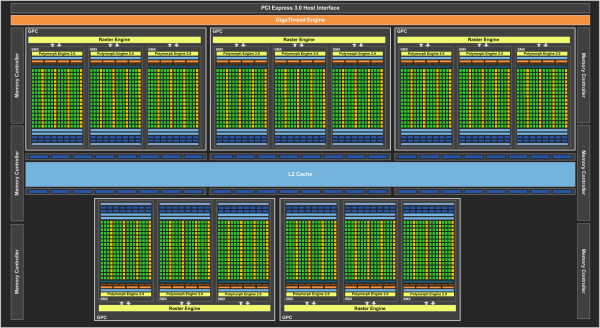 Of course functional units are only half the story, so let’s talk about clockspeeds. As a rule of thumb bigger GPUs don’t clock as high as smaller GPUs, and Titan will be adhering to this rule. Whereas GTX 680 shipped with a base clock of 1006MHz, Titan ships at a more modest 837MHz, making up for any clockspeed disadvantage with the brute force behind having so many functional units. Like GTX 680 (and unlike Tesla), boost clocks are once more present, with Titan’s official boost clock coming in at 876MHz, while the maximum boost clock can potentially be much higher.

On the memory side of things, Titan ships with a full 6GB of GDDR5. As a luxury card NVIDIA went for broke here and simply equipped the card with as much RAM as is technically possible, rather than stopping at 3GB. You wouldn’t know that from looking at their memory clocks though; even with 24 GDDR5 memory chips, NVIDIA is shipping Titan at the same 6GHz effective memory clock as the rest of the high-end GeForce 600 series cards, giving the card 288GB/sec of memory bandwidth.

Of course with great power comes great power bills, to which Titan is no exception. In GTX 680’s drive for efficiency NVIDIA got GTX 680 down to a TDP of 195W with a power target of 170W, a remarkable position given both the competition and NVIDIA’s prior generation products. Titan on the other hand will have a flat 250W power target – in line with prior generation big NVIDIA GPUs – staking out its own spot on the price/power hierarchy, some 28%-47% higher in power consumption than GTX 680. These values are almost identical to the upper and lower theoretical performance gaps between Titan and GTX 680, so performance is growing in-line with power consumption, but only just. From a practical perspective Titan achieves a similar level of efficiency as GTX 680, but as a full compute chip it’s unquestionably not as lean. There’s a lot of compute baggage present that GK104 didn’t have to deal with.