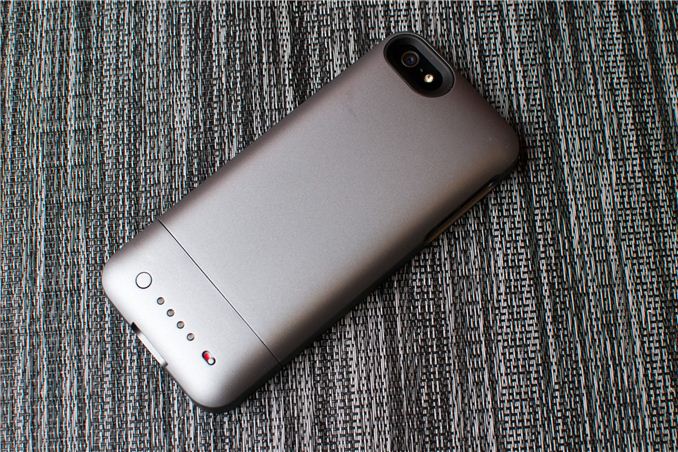 Lately I have found myself doing a case review here and there, and battery cases are particularly interesting since they're easy enough for us to test and integrate into our workflow in a unique matter. Plus, there's never such thing as too much battery life for a device. Battery life is a big part of our smartphone reviews, and for a while now I've been carrying around the newly-released Mophie Juice Pack Helium case for the iPhone 5. Back in the iPhone 4S days, I had a previous generation Mophie for that form factor, and even though I ran the battery life tests, I never got around to actually writing a review of the case for whatever reason. When I saw the Helium come out for the new form factor of the iPhone 5, I decided to go for it and run it through our tests. 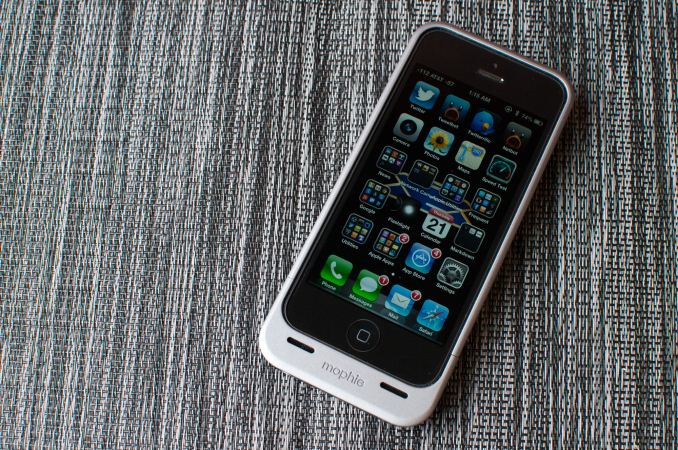 The Helium is built like and feels unsurprisingly similar to the previous generation of Mophie juice packs. The material in contact with the hand is a soft touch, semi rubbery material which feels like a lot of other smartphones. The iPhone slides into the case from the bottom and not the top like the previous juice packs. Interestingly enough this necessitates the presence of some electrodes which connect from the bottom of the case to the body of the case which contains the battery. 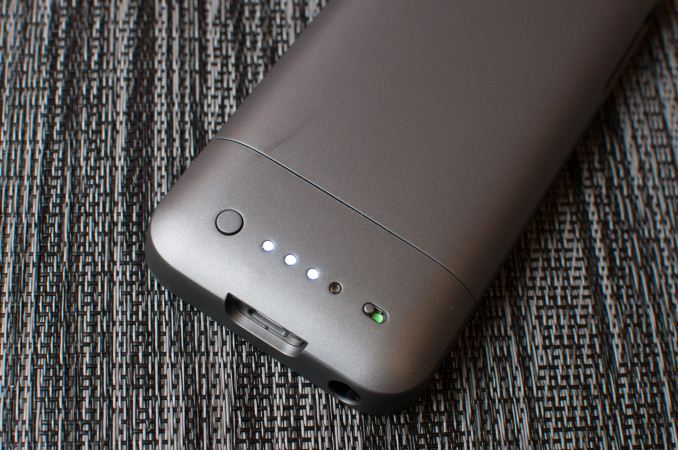 On the back, Mophie continues to include a battery charge status indicator which consists of four white LEDs, a status button, and power switch. When plugged in, the Helium no longer constantly flashes the charging status LEDs, instead only flashing it for a short time to let you know you plugged it in correctly, before stopping after 30 seconds. Checking on charging status by tapping the button does illuminate them, but again only for a short time, so the new Mophie doesn’t keep users who put their phones face down on a nightstand for charging up all night. 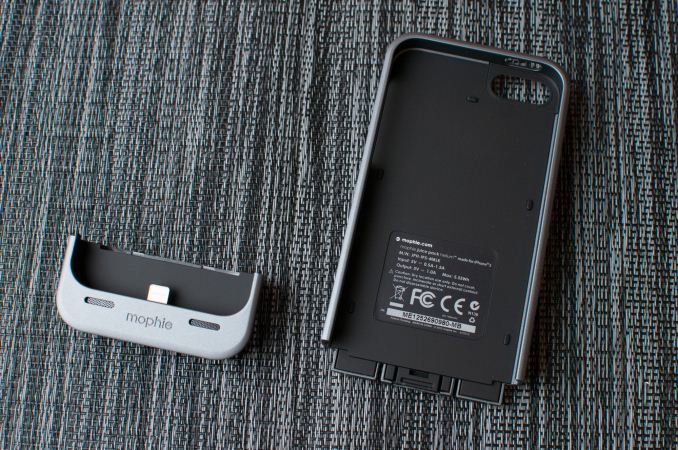 On the inside of the case, Mophie has placed five rubber raised inserts around the case to put a small gap between the aluminum back and the material of the case itself, so the two aren't completely coplanar. This is done to mitigate any potential chance of putting hairline scratches or sleeks into the back of the case from dust or dirt that finds its way in-between. I wish more cases did this instead of putting the rear of the device right against material. I should note that the Helium I took a look at was the version being shipped online, not a snap-in design which is supposedly being sold on Apple Store shelves, since Apple doesn't want to have any chance of slide-on slide-off cases or accessories leaving deep scratches on the backside of its devices.

Since the lower end of the Helium contains the lightning connector into the iPhone and microUSB connector for charging, the bottom snap on part is correspondingly thicker at its edge. Due to that thickness, getting to the headphone jack requires a large rubber extension which has a boot and male connector at one end, female connector at the other end. If you want to use headphone output and the Helium, this is something you'll want to keep handy. 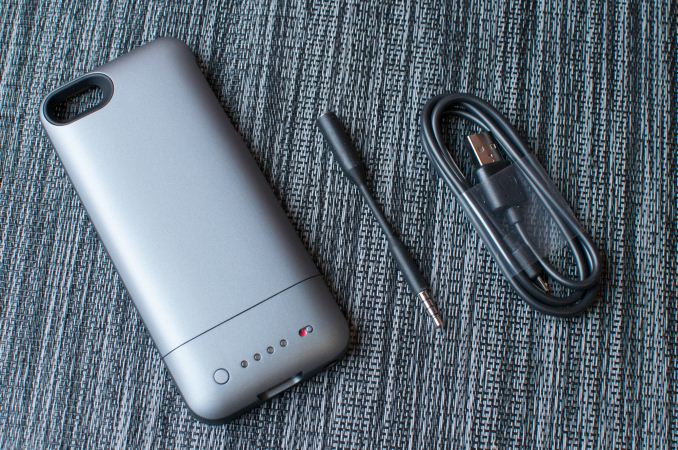 Subjectively the Helium does add to the size and thickness of the iPhone 5 considerably, although it isn't any more so than previous generations. Thickness is up, although the most noticeable dimension of change is aspect ratio. The already quite tall 16:9 iPhone 5 feels even taller thanks to the speaker chamber and charge controller lip at the bottom, but it isn't overwhelmingly large.

I put together a table of dimensions with the Helium installed and what other information there is which is relevant.

Obviously this wouldn't be of much value without doing a battery life test. For the Helium I decided to try something different and use the Anritsu base station emulator where I have full uplink power control. I'm still trying to nail down the most realistic uplink power number, and think I set things a bit too aggressive for this test, but what we're after is how much scaling you'll get out of the Helium. The workload itself remains the same as our other battery life tests — it's the same page loading suite as we use in the big reviews — I'm just attaching it to the base station emulator and controlling uplink power manually.

We see a 60 percent scaling in this pretty brutal test which managed to kill the iPhone 5 in under 3 hours. Following Mophie's guidance and turning the Helium on only when you want to charge up the iPhone 5 will definitely help improve efficiency. There's overhead given the way the Helium has to charge the iPhone instead of act like a battery, but that's something all battery cases will endure for the iPhone. With that size battery you'll at least get an additional boost. 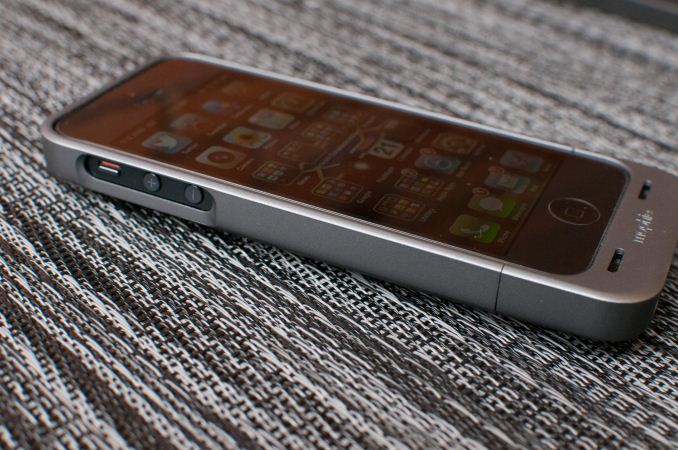 I've been timing charge times of devices as well lately, and the Helium takes 2.3 hours from completely empty to charge up. This is pretty fast given the size, and I have no problems with charging it on any BC 1.2 USB charger with microUSB.

There will inevitably be people who complain about the size of the Helium, but there have been multiple times that the Helium has made the difference between a phone with enough charge to get me through the rest of the day, and no phone at all. Given the current state of battery life across the smartphone spectrum, I'll gladly take increased size in favor of more battery life, and the Helium will get that done and offer additional protection.