For at least every Computex I have attended, ASUS have put on a show – the ROG press conference.  This is ASUS’ opportunity to showcase their gaming range, the updates to the gaming range and is definitely a spectacle for the eyes.  This year there are a number of items that certainly pique my interest.

As expected, the ROG motherboard range we have seen already were showcased – the Maximus VI Hero, Gene and Extreme.  Typically part of this range is the Formula, which was announced today. 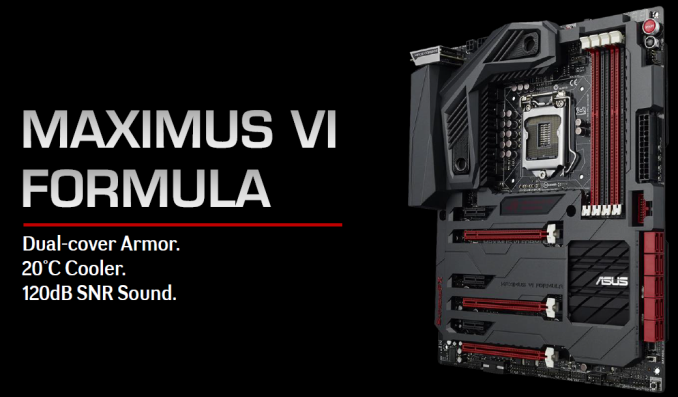 As with the Maximus V Formula, ASUS are carving out a niche for the Formula – it is the gaming motherboard to have, much like the Extreme is the performance motherboard to own.  On the Formula this generation, the most obvious improvement is the Formula Armor.  This combination backplate and frontage is designed to help rigidity – ASUS understand that high-end users going after the Formula are going to be big GPU gamers, where the GPUs can weigh 2 pounds or more.  This armor is designed to help make sure the motherboard does not bend when subject to these heavy weights over long periods of time.

The Formula also improves upon audio, with an upgrade to SupremeFX – we have the Realtek ALC1150 audio codec for the rear with a front-panel CirrusLogic DAC for 120 dBA SNR, all with improved EM shielding, filter caps and headphone amplifiers for 600 ohm headphones.  The heatpipe arrangement in the power delivery gets an upgraded design (codename ‘CrossChill’), and the mini-PCIe combo gets an upgrade, with instead of mSATA we have the first M.2 connector on a motherboard.  The Formula also comes with 802.11ac as part of the combo card. 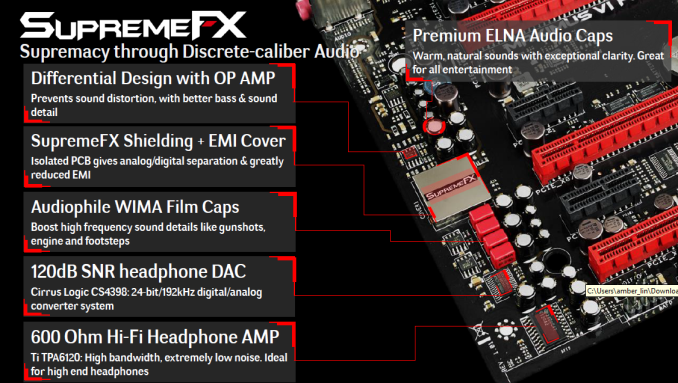 With the ROG motherboard range, ASUS had three models – over the past few weeks we learned this had improved to four with the Hero.  We can now make that range a total of five motherboards, with the announcement of the Maximus VI Impact, the mini-ITX model.

If our readers remember back to my X79 ROG review of the range and the brand, we had an interview with Kris Huang, the PM for the ROG series.  I quizzed him on the possibility of a mini-ITX ROG motherboard, and the response was fairly non-specific.  Now it is clear that at the time they had had the idea internally and were developing it into the Impact we see today. 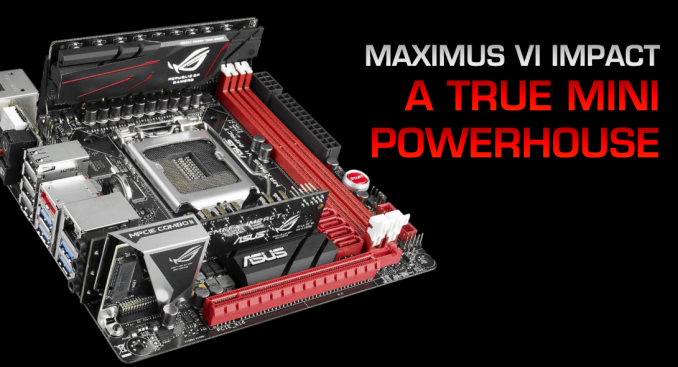 So with a mini-ITX SKU, measuring 17cm x 17cm, there is little space to provide the more typical ‘gaming’ features.  Despite this limitation, ASUS have provided the Impact with more innovation than you can imagine. 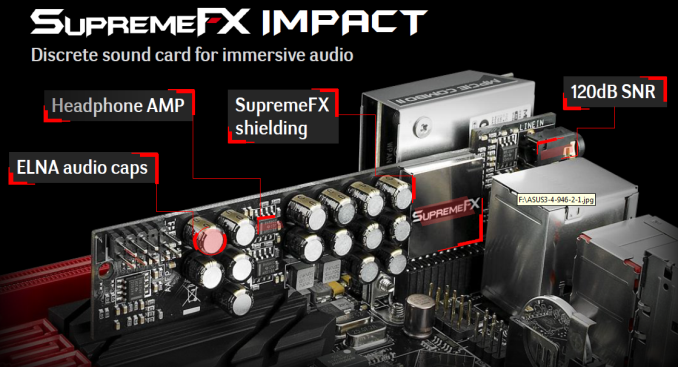 So it was perhaps predictable that the ROG mITX would have power delivery on a daughter board at right angles to the motherboard, much like what we saw on the P8Z77-I Deluxe.  What was not predicted is the SupremeFX Impact – a long extensive card for the IO with SupremeFX style audio.  In this card we get the SupremeFX shielding, high-end filter caps and headphone amplifiers, much like the Formula.

The Impact also has the mini-PCIe combo card, and I am in the process if this is a model for users’ own WiFi or if it is the same as the Formula.  We also get an additional card for the rear IO with integrated two-digit debug, power/reset buttons and a Clear_CMOS button.

No word on pricing or release date for either model, but I would expect within a month or two for both to hit the shelves.