Acer’s marketing material mentions that they rethought everything about the notebook when designing the R7, and I’m definitely not going to dispute that. Yes, this is still a laptop at its core, but things have been moved around in some surprising and perhaps interesting ways. The Ezel hinge and touchscreen are the primary discussion here, and the R7 comes with supposedly five different operating modes: regular laptop, laptop with the screen shifted forward, tablet, floating table, and presentation mode (flip screen laptop). The question most people will have is whether or not the changes made to accommodate the Ezel hinge are actually worthwhile.

Realistically, the floating table mode is pretty much useless as far as I’m concerned, and the presentation mode is only marginally interesting. Still, some people might occasionally use those modes. It’s the other three modes that are going to pull the lion's share of the duty, so let’s look at each of those.

First, you can just open up the display and use the R7 as a regular laptop. What you’ll immediately notice however is that the touchpad isn’t where it’s supposed to be, and in fact there are no palm rests. Some people might hold their hands above the keyboard while typing, but I tend to rest my wrists on whatever surface is in front of the keyboard – be that palm rests, desk, or something else. I can type reasonably well on the R7, and I have no real complaints about the keyboard layout – in fact I actually like it – but the missing palm rests definitely detract from the overall typing experience. The good news is that if you’re the type that has issues with inadvertently activating the touchpad while typing, that won’t happen with the R7. The bad news is that the touchpad is in a weird location, and I should also note that the notebook feels quite back heavy due to the weight of the touchscreen and cover.

The second mode, and the one that I’m most likely to use with the R7, is as a laptop with the screen pulled forward. You still have the issues associated with the missing palm rests, but the idea is that the touchscreen is easier to reach this way. I should mention that the touchpad works okay, and it uses Elan Tech hardware, but it can still be a little bit choppy. The touchscreen on the other hand works well as an input device, providing a smooth scrolling experience and all of the other usual gestures. Except, not all applications fully recognize the touchscreen gestures, so for example swiping with a single finger to scroll doesn’t always work. This is mostly a problem with third-party apps that haven’t been updated to recognize Windows 8 gestures, but it still happens more than I’d like. Also, grabbing smaller elements like scrollbars for the edge of a window to resize can be difficult with a touchscreen – there’s just not enough precision to pull it off properly.

On the whole, this is certainly an interesting idea, and for people that really like touchscreens it might actually be preferable to a standard laptop design. However, I do think there needs to be a bit of tweaking to the current design to get it right. Mostly, the laptop just feels a lot heavier than you would expect, and being heavy means you are less likely to carry it around which means you’re not using it as a laptop. In a sense, the R7 is like a smaller, portable all-in-one that happens to have the ability to function as a laptop if you need it.

Finally, we have tablet mode, where you lay the top panel flat against the keyboard (or at least almost flat). I’m not sure most people are interested in a 15.6-inch tablet, and when you add on the bulk of the keyboard and hinge it becomes an even more difficult prospect to carry around. This is definitely the heaviest, largest tablet that I’ve ever tried to use, and while it can work as a tablet, it’s not something I found necessary on a regular basis. Showing friends or family pictures on a 1.5 pound tablet is one thing; passing around a 5.3 pound tablet is another! 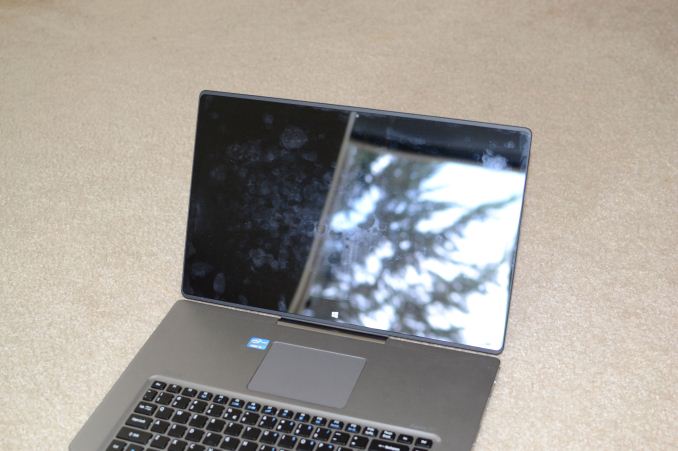 Of course, any time you use the touchscreen you also run into the usual touchscreen problem: fingerprints. On a laptop with a 15.6-inch screen, I find this is an even bigger issue. It’s pretty easy to wipe off the touchscreen on a smartphone, but even a 10-inch tablet usually requires that you have a microfiber cloth on hand. With something the size of the R7, fingerprints run wild! And even when you’re careful, there’s always the chance that a stray spec of grit will leave a scratch instead of just wiping off. I also feel like the LCD backlight needs to be brighter; I measured maximum white levels of just shy of 300 nits, where most smartphones and tablets are more likely to hit 400+ nits. Obviously, having a large display running at higher backlight levels can easily chew up a lot of battery life, and as we’ll see in a moment battery life isn’t one of the strong points of the R7.