State of the Part: CPUs 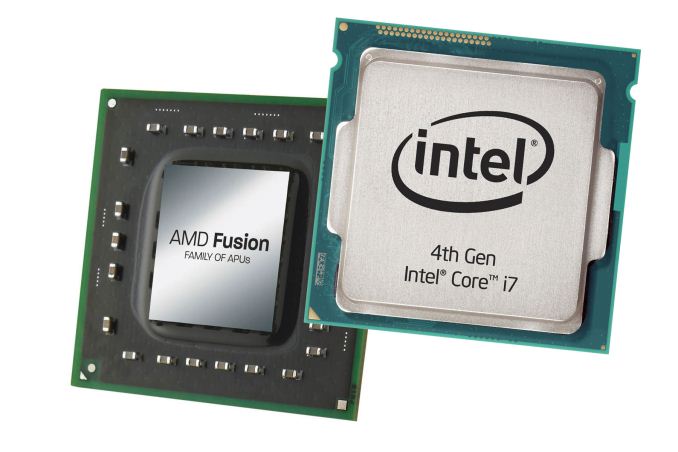 Short Introduction to CPUs and Terminology

There are many elements that go into any modern computer: the CPU/APU, motherboard, memory, (optional) GPU, storage, case, and power supply. While some items like the case and power supply don't usually have an impact on performance, the CPU is one of the core elements and should be carefully selected. The goal today is to give a short overview of the level of performance you can expect across a large selection of CPUs/APUs.

Of course the choice of CPU also limits your choice of motherboard and potentially other components, but that's a topic for another day. Briefly, both AMD and Intel have several current platforms, and each CPU/APU requires a specific class of platform (i.e. a certain CPU/APU socket). AMD currently has the FM2/FM2+ platforms for APUs, with the AM3+ platform being used for CPUs (though AM3+ is mostly being phased out at this stage); Intel has platforms for sockets LGA1150 and LGA2011, with the latter being a higher performance/higher cost "Extreme" platform that borrows quite a bit from Intel's workstation platform (and LGA2011 is set to be replaced by a new platform next month).

Before we go any further, let's take a step back and quickly cover some of the terms we'll be throwing around. CPU stands for Central Processing Unit, and broadly speaking it handles most of the calculations that a modern PC performs in order to do useful work. APU stands for Accelerated Processing Unit, and it's AMD's marketing term for a CPU that also includes a GPU (Graphics Processing Unit), with the distinction being that the GPU portion must be able to perform at a minimum a certain subset of calculations. AMD's APUs all have at least DirectX 11 capabilities, and while Intel now includes DX11 GPUs (called "processor graphics") in most of their CPUs, in general AMD's APUs have faster/better graphics than Intel's CPUs.

Then we come to the processor model numbers. It would be great if higher numbers were universally better, but these days all CPUs/APUs use model numbers that are similar to what you'll find with many other products (e.g. cars). A higher number can mean many things – better performance, more features, lower power, a newer part, etc. – and both AMD and Intel have several families of processors. There are also differences between generations of processors that can have an impact on performance and features, but again this is a topic to address in greater detail elsewhere.

The short summary is that on the Intel side, in order of increasing performance/features the processor families include the Celeron, Pentium, Core i3, Core i5, and Core i7. For AMD, things are a bit easier as their processor models consist of the A4, A6, A8, and A10 APUs, along with FX-series CPUs (i.e. no graphics, though AMD is releasing mobile FX-series APUs now in the laptop market). If you want to know more about the features and specifications of any particular processor, you can use Intel's ARK or AMD's desktop APUs and desktop CPUs.

Comparison of CPU and Graphics Performance

With that introduction out of the way, let's move on to the level of performance you can expect. All of the performance information presented here comes from CPU Bench, but instead of looking at individual charts we have averaged performance across a bunch of tests and normalized the scores relative to Intel's Core i3-4330. Note that not all benchmarks were tested on every processor, but we selected those tests that were run on most configurations; some of the processors (e.g. i5-4670K) that didn't have all the benchmarks run on them thus fall further down the charts than expected. The charts below thus represent a high level abstracted overview of CPU performance. We have also tested the integrated graphics performance where applicable, again normalized relative to i3-4330 performance. 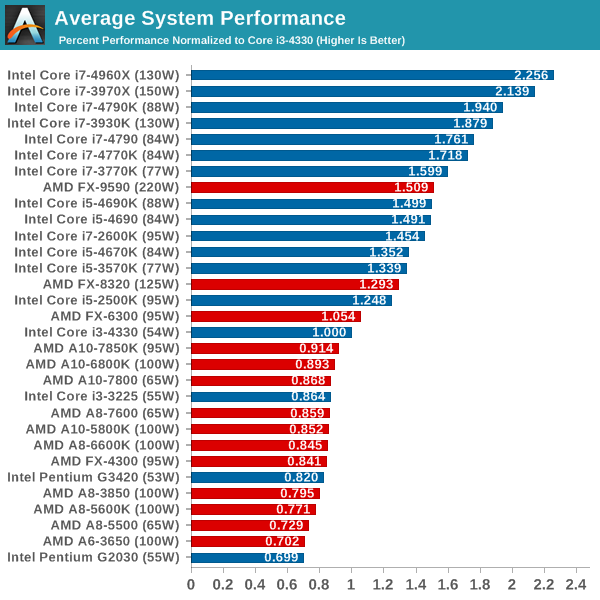 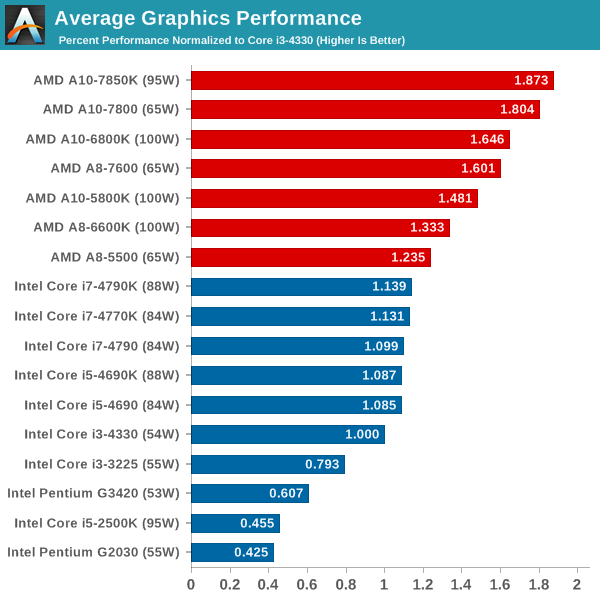 There's a lot of abstraction going on here, naturally, so if you want specifics on benchmark results you'll need to refer to CPU Bench. The benchmarks used include single-threaded and multi-threaded workloads, along with system tests that will hit storage and memory quite a bit (e.g. PCMark 8 and 7-zip); the graphics benchmarks use five games along with two GPU compute tests. While the i7-4960X may not win every benchmark, and likewise the Pentium G2030 may not lose every benchmark, looking at overall relative performance gives us the above results and provides a good baseline recommendation as to which CPUs are the fastest.

The above graphs are a great picture of the split happening in the world of CPUs/APUs. On the CPU side of the fence, Intel is virtually untouched by AMD. Our reference i3-4330 is faster than all but the fastest AMD processors, and in fact only the AMD CPUs (i.e. not APUs) are able to surpass the overall performance of Intel's i3-4330. Of course we also have to look at what the overall scores really mean, and while the fastest CPUs like the i7-4960X are more than twice as fast as the i3-4330, the slowest CPU included in the charts – the Pentium G2030 – still provides 70% of the performance of the i3-4330. For general use cases like surfing the Internet and watching movies, all of the processors in the above chart should suffice, and other elements like storage often have a bigger impact on the user experience. 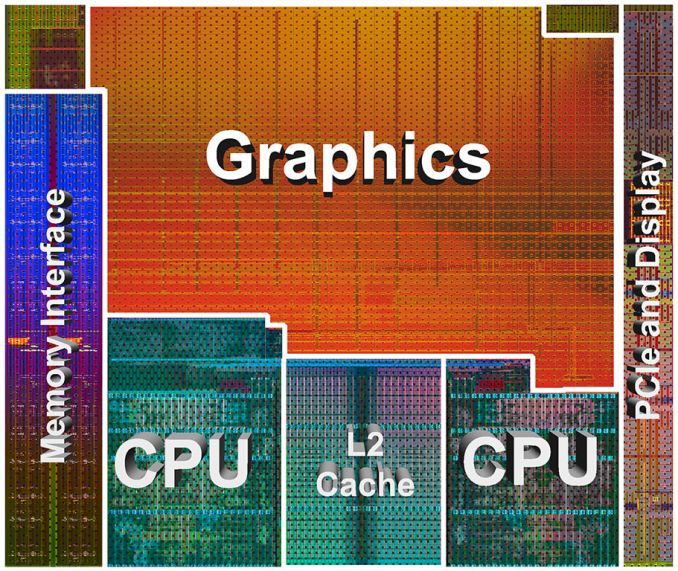 Moving to the graphics chart, the tables are turned and even Intel's fastest graphics solutions (outside of the HD 5000, Iris, and Iris Pro, which we have not includes as they're limited to laptops and OEM systems) are still slower overall than the AMD A8-5500. You can see from the above two die shots that AMD has dedicated a proportionally larger amount of the chip to graphics than Intel has, though Intel's Haswell GT3 parts double the graphics portion and end up being closer to AMD in terms of alloted space, while AMD disables portions of the graphics on their A8 and A6 APUs.

We're missing results from many older/slower processors of course, and adding in even a budget dedicated GPU (i.e. the AMD R7 240 or NVIDIA GT 730) would in most cases deliver better overall performance than even the fastest on-die GPU. While graphics has become more important over time, in practice it's mostly useful for gaming and a few computationally intensive workloads like video and image processing. That could change and GPU performance could become a bigger element of the overall user experience, and that's where AMD is trying to go with their talk about Compute Cores, but currently GPU performance isn't as useful as CPU performance for most tasks. 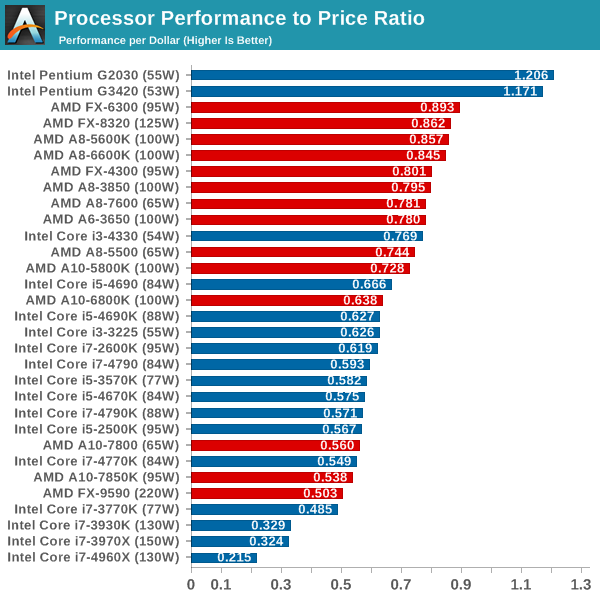 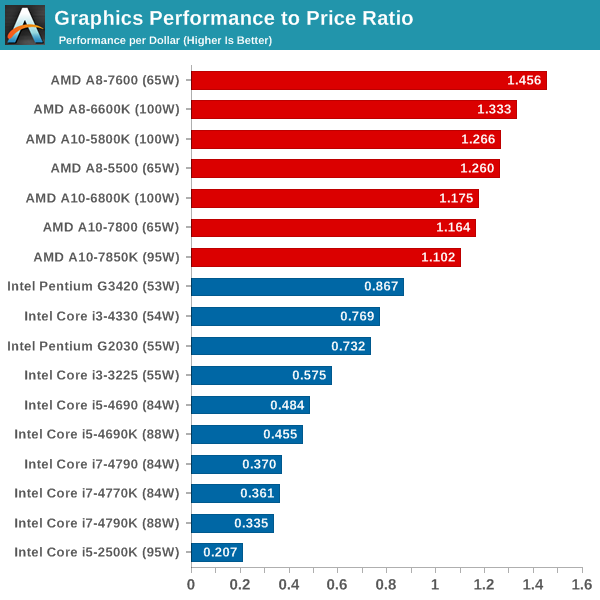 Naturally, there's one other element that needs to be considered: the price of the parts. Intel holds the crown for the fastest CPU performance, but if we just look at the cost of the CPUs/APUs and how much you pay for a certain level of performance the story is quite different. Not surprisingly, the least expensive processors tend to look the best here. However, processors don't exist in a vacuum – they're only a portion of the total system cost – so we really need to add in a baseline price for the rest of a system. 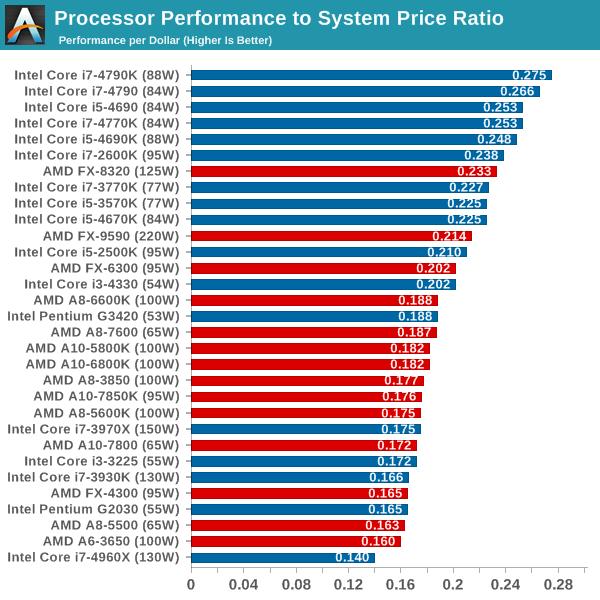 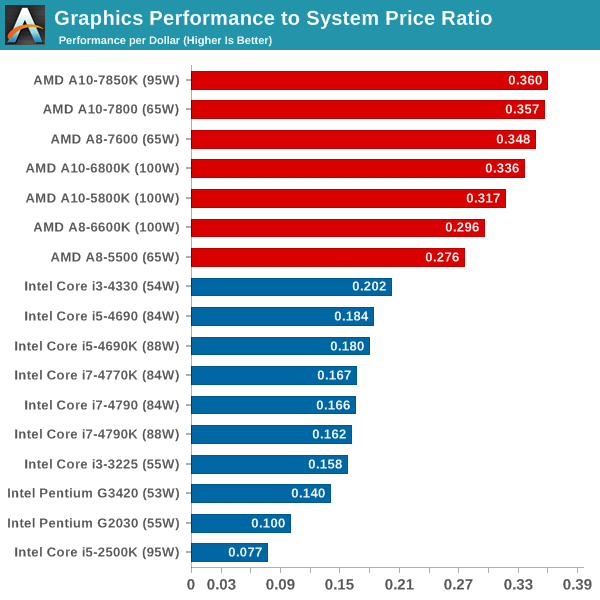 Now we're back to Intel holding on to the top spots, and interestingly it's the more expensive CPUs that take the lead. AMD's FX-8320 makes a decent showing, though the need for a discrete GPU drops it to seventh place overall. The difference in relative value between the best and worst processors becomes far less pronounced, on both the CPU and graphics charts, though AMD continues to lead on graphics performance. (Again, toss in a moderate dedicated GPU and it would be a different story.) We've also left out any consideration of power requirements, which don't necessarily match up with the TDPs we've listed. In general, the latest APUs from AMD (Trinity, Richland, or Kaveri) and the latest CPUs from Intel (Ivy Bridge and Haswell) all have similar idle power draw, so unless you're looking at the AM3+ or LGA2011 platforms power isn't a primary consideration.

If you want a recommendation based on the above information, the short summary is that Intel's latest Haswell CPUs – the i7-4790 and i5-4690 – continue to be my two favorites, with overclockers getting a recommendation to spend a bit more for the Devil's Canyon i7-4790K or i5-4690K. If you're opposed to buying Intel, the price of Kaveri APUs right now is higher than I'd like, and the FX-8320 is still a potent CPU for certain workloads (and it has four modules with eight cores compared to two modules and four cores for the fastest APUs). Even so, unless you specifically need the additional CPU cores, I'm more inclined to go with a Kaveri or Richland APU. The A8-7600 is probably the best balance of performance and price, but if you want the best on-die graphics solution the A10-7800 and A10-7850K are right in the same relative range for relative value.