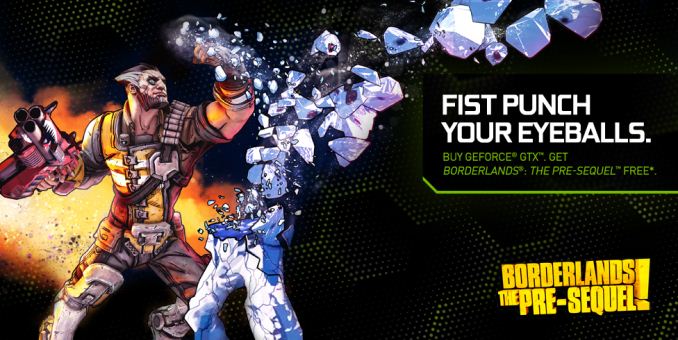 After letting their previous Watch Dogs bundle run its course over the past couple of months, NVIDIA sends word this afternoon that they will be launching a new game bundle for the late-summer/early-fall period.

Launching today, NVIDIA and their partners will be bundling Gearbox and 2K Australia’s forthcoming FPS Borderlands: The Pre-Sequel with select video cards. This latest bundle is for the GTX 770 and higher, so buyers accustomed to seeing NVIDIA’s bundles will want to take note that this bundle is a bit narrower than usual since it doesn’t cover the GTX 760.

As for the bundled game itself, Borderlands: The Pre-Sequel is the not-quite-a-sequel to Gearbox’s well received 2012 title Borderlands 2. As was the case with Borderlands 2 before it, this latest Borderlands game will be receiving PhysX enhancements courtesy of NVIDIA, leveraging the PhysX particle, cloth, and fluid simulation libraries for improved effects.

Meanwhile on a lighter note, it brings a chuckle to see that NVIDIA is bundling what will most likely be a Direct3D 9 game with their most advanced video cards. This if nothing else is a testament to longevity of the API, having long outlasted the hardware it originally ran on.

Finally, as always, these bundles are being distributed in voucher from, with retailers and etailers providing vouchers with qualifying purchases. So buyers will want to double check whether their purchase includes a voucher for either of the above deals. Checking NVIDIA’s terms and conditions, the codes from this bundle are good through October 31st, so it looks like this will bundle will run for around 2 months.