One of the highlight features of the previous Moto X was Touchless Control, and Motorola spent a great deal of time trying to empahsize improvements in this feature with at the launch event. For those unfamiliar with Touchless Control in the previous Moto X, I would reference Brian's Moto X review. For those that don't want to read another review, the quick explanation is that Moto Voice acts as a voice command system, similar to Siri but with integration into Google Now and it works purely based on voice instead of long pressing a home button or a swipe gesture on the navigation keys. With the new Moto X, not too much changes, but there are some key features added. First, we see the ability to assign new keywords other than “Ok Google Now”, which is nice. I’m not really sure how this is enabled, as based upon some digging Motorola is still using a TI C55x DSP to enable low power hotword detection. 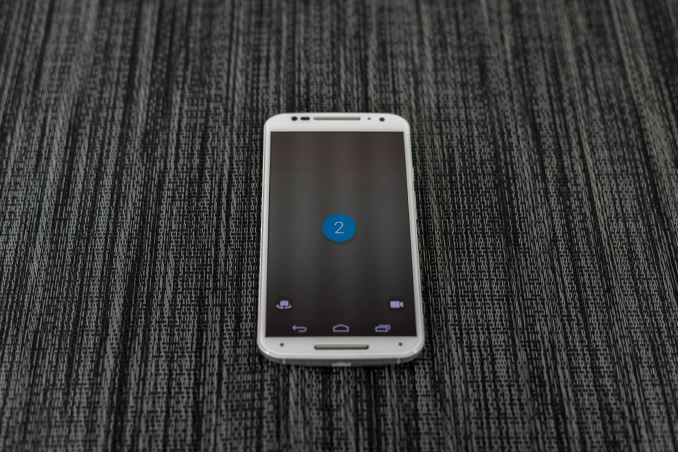 For the most part, other than this change I don’t really see a major step forward in functionality, although I’m sure that some will see a great deal of benefit from the voice-enabled selfie feature, which automatically opens the camera app with the countdown as seen above. Voice control continues to be an area where I’m unsure that there’s functionality to be had all the time. For the most part, I only seem to use voice control in situations where my hands are unable to manipulate the phone, which basically means when I’m driving or walking. For better or worse though, this is an area where wearables are much more effective. For example, it’s quick and easy to raise my wrist and ask for navigation to an event while driving compared to trying to reach into my pocket and carefully pull out my phone without dropping it under the seat. While explaining how this happens is a long story, the critical point here is that Moto Voice doesn’t really have a killer use case that isn’t done better by something else. 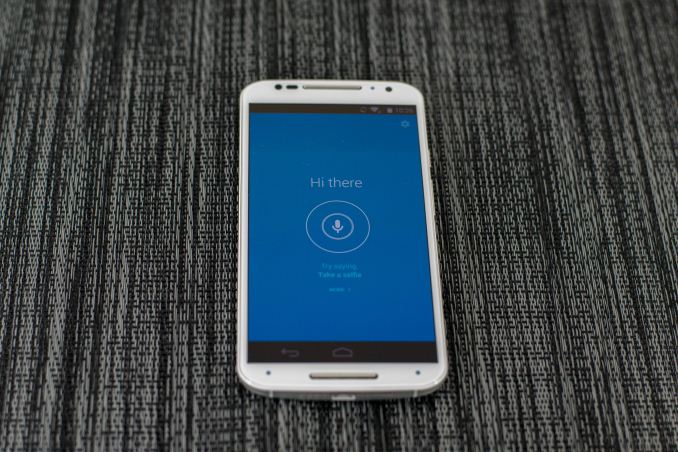 At any rate, the user interface also changes with the new Moto X. We see a great deal more color and a generally friendlier UI compared to the rather dark theme we saw before. Motorola seems to be following Android UI trends in general with this move, although it will affect battery life on AMOLED panels. The setup process is relatively simple, although there’s definitely a need for a quiet room. Even mild amounts of background noise will complicate setup. I also noticed that differing aural environments could alter the responsiveness of Moto Voice, although this could be due to the function turning itself on and off due to a bug in the ROM.

While Moto Voice is a bit limited in usability, Moto Display continues to be a great feature. For those that are unfamiliar with how Active Display worked in the previous Moto X, I would reference Brian's Moto X review again. For those that aren't familiar with Moto Display, this is effectively a low power mode in the Moto X that will display notifications and the time that also acts as a lockscreen. In order to support this low power mode, it isn't actually a part of Android OS and is programmed by a microcontroller so it isn't possible to take a screenshot of Moto Display.

While what we saw in the original Moto X was fantastic, the new Moto X takes things further by adding Moto Actions. While one part of Moto Actions is waving to silence alarms and phone calls, the other aspect allows for proximity to turn on Moto Display. This means that there’s no longer a need to shake the table or wiggle the phone in order to glance at notifications. While the original Moto X had a similar feature, it relied on the proximity sensor and required precise hand placement in order to turn on the display. Instead, with the new Moto X all that is needed is a hand wave or just getting close to the phone. It doesn’t really need to be accurate either, as pretty much any hand wave over the display will cause Moto Display to activate. In practice, handling of the notifications is still mostly similar, although now there’s the ability to display up to three notifications instead of just one. 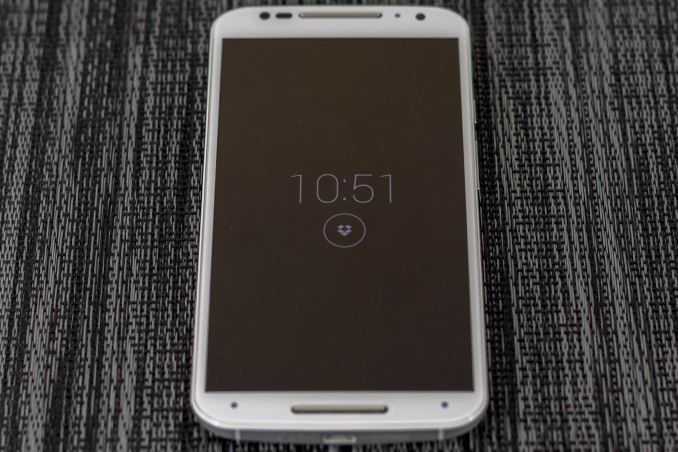 While Active Display in the original Moto X was good, the new Moto X really turns it into a fantastic feature. It's hard to really explain because on the surface it seems rather mundane but after using Moto Display it's clear just how much time it saves. The glance time is just right to view notifications and the hand wave/approach action is effortless compared to pressing a home button or tapping the display. There's also no doubt that this helps to improve real world battery life as the seconds used to glance at notifications adds up quickly over time, especially because initial unlock will drive the CPUs to max power to ensure responsiveness. 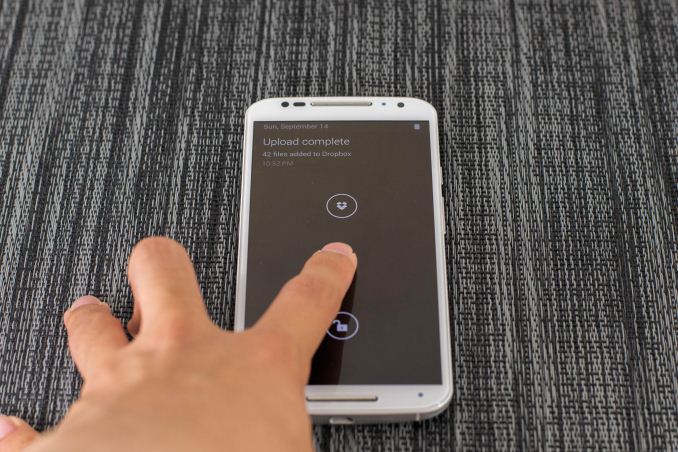 If I’m honest, I’m not really completely sure how this new feature is implemented either. TI’s MSP430 is gone, and the part that seems to take its place is an STM401 sensor processor, which could be the solution used to enable Moto Display and also acts as a sensor hub. I'm not really sure what drove a change, but it's possible that the MSP430 limited feature expansion.