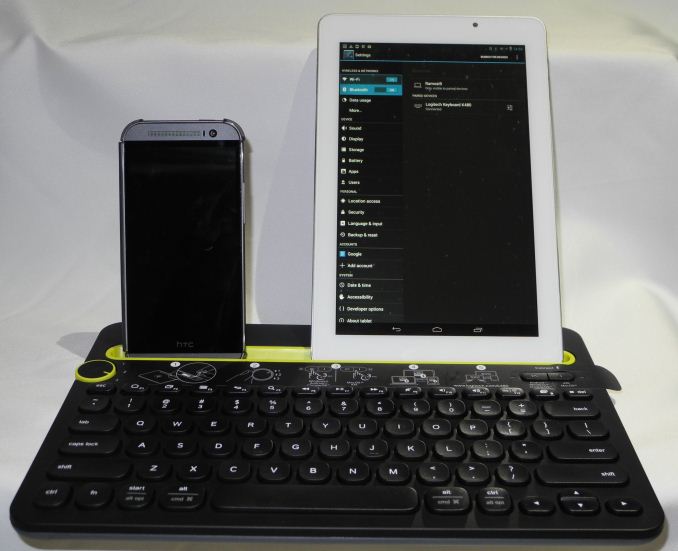 We have been doing round-ups of various input devices fit for HTPC purposes. Some of the vendors have started shipping with Bluetooth instead of using a proprietary communication mechanism over 2.4 GHz RF. The advantage of Bluetooth is its versatility and presence in almost all modern mobile devices (smartphones and tablets). These don't support a full-size USB host port for plugging in the USB RF receiver dongles. Utilizing Bluetooth enables these input devices to communicate with the rising crop of mobile devices as well as interface with traditional PCs. Communication with PCs can be enabled by using either an inbuilt card - common in most notebooks which integrate Bluetooth and Wi-Fi capabilities in a single mPCIe card - or, an explicit Bluetooth dongle.

Logitech recently introduced an innovative Bluetooth keyboard, the K480. While traditional Bluetooth keyboards have aimed to differentiate with aesthetics, in-built rechargeable batteries and support for multiple devices at the $100+ price points, Logitech's K480 aims to bring in a set of 'sweet-spot' features for $50.

The salient features of the K480 include:

After extensive use, we found that the keyboard fulfills most of its promises. It is cross-platform and does support pairing to multiple devices. The sequence of steps to get the device paired is outlined pictorially in the top half - This ensures that even the tablet-only non-tech savvy consumers can get up and running quickly with the unit. There is no need for a dongle, and as long as the target device has Bluetooth capabilities, the keyboard is good to go. Range is not an issue due to the use-case (mobile devices in close proximity). The unit feels quite solid, and is heavy (in order to ensure stability when heavy tablets are placed in the recess). The function keys are multiplexed with some multimedia / mobile specific buttons (such as single keypress to home). In addition, on Android devices, an app can be installed to provide additional keyboard layouts.

In terms of key feel and the typing experience, it has to be said that the keyboard is suitable for usage in bursts (again, the typical smartphone / tablet usage), and not prolonged typing. The shape of the keys, as well as the keypress feedback, seem to have been decided more with the looks and aesthetics in mind, rather than the typing experience. Fortunately, there is nothing to complain about the keyboard layout itself (from the viewpoint of Windows and Android systems, at least). Other than that, it would have been nice to have an adjustable tilt option for ergonomic considerations.

In terms of future improvements at this price point, it would be nice to have a trackball (in case of an unchanged form factor) or a trackpad. This would enable standalone usage with a PC (similar to the Adesso Bluetooth Keyboard WKB-4000BB). The Bluetooth keyboard market for mobile devices is heavily commoditized. So, it is refreshing to see Logitech integrating some nifty and interesting features in the K480 to make it stand out in the crowd.