Benchmarked: Lords of the Fallen 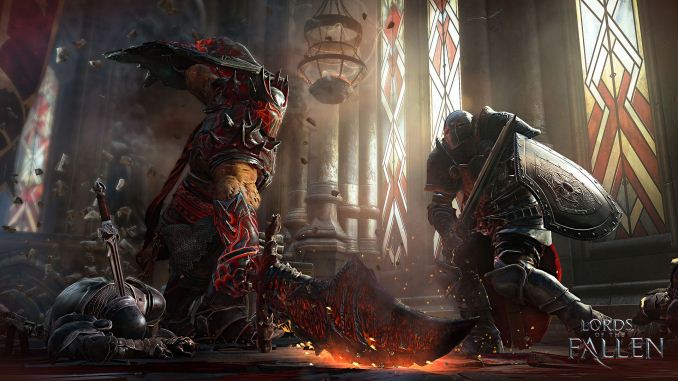 Officially launched on October 28, Lords of the Fallen had a bit of a rocky start so it took longer for me to finish running benchmarks on the game, but I'll get into that momentarily. At its core, Lords of the Fallen is a melee third-person action-RPG similar in many ways to the Dark Souls games. There are periodic boss fights to shake things up, as you play the convicted criminal Harkyn (his face has tattoos to publicly declare his sins) trying to stop the invasion of the demonic Rhogar. The game has received decent reviews, with a current Metacritic score of 72%.

Like many recent releases, Lords of the Fallen is a multi-platform title that launched simultaneously for the PC, PS4, and Xbox One. The updated consoles now sport more memory than the old PS3 and Xbox 360, which gives developers opportunities to do a lot more in terms of textures and graphics quality, and at launch I think that ended up creating some problems on the PC. The short summary is that GPUs with 2GB of VRAM or less tended to have quite poor performance. CrossFire also had issues: it wasn't just functioning poorly but it actually caused the game to crash to the desktop.

The first update to the game was released about a week later, and it fixed a few bugs and instability issues, but more importantly it offered much better performance on GPUs with limited VRAM. CrossFire is also "working" now – and I put that in quotes because CrossFire is actually causing degraded performance in some cases and is basically not scaling well enough to be worth the hassle so far. Need I mention that this is an NVIDIA "The Way It's Meant To Be Played" title? Not that the developers have intentionally crippled AMD performance, but I don't think AMD has spent as much time optimizing their drivers for the game. It runs well enough with the right hardware and settings, but this is definitely a game that favors NVIDIA.

We tested using the game's built-in Ultra and High settings, but there's not a significant difference in performance or quality between the two modes so I'm in the process of running another set of performance figures at Medium quality. (I'm also testing Assassin's Creed: Unity performance, which will be the next Benchmarked article, so it will be a bit before I can post the full 1080p Medium results.) Before we get to the performance, here's a quick look at image quality using the four presets:

The major difference between Ultra and High seems to be a minor change in the handling of shadows; I'm not sure you could definitively call Ultra "better", and performance is so close that it's mostly a moot point. Medium appears to disable Ambient Occlusion on the shadows, resulting in a much more noticeable change to the graphics, while Low also disables the Post Processing effect. I'm not sure that's actually a bad thing, though – the effect warps the image a bit, particularly on the right and left thirds of the screen, and tends to make everything look a little blurry/weird.

Lords of the Fallen also features support for some NVIDIA technologies, including PhysX APEX particle support. Many of the effects use PhysX on the CPU and thus work with all GPUs (as well as running on the PS4 and Xbox One), but there's an additional effect called Turbulence that's only available on NVIDIA GPUs. I didn't try to do thorough testing of performance with and without Turbulence enabled since it's an NVIDIA exclusive, but informally it looks like the performance hit is relatively small – around 5-10% – so if you're running an NVIDIA GPU it's probably worth enabling.

One final thing to note before we get to the benchmarks is that Lords of the Fallen is very demanding when it comes to GPUs. Moderate hardware (e.g. Radeon R7 and similar, or NVIDA GTX 750 Ti and lower) are going to struggle to break 30FPS at 1080p Ultra or High settings, so 1080p Medium or even 1600x900 Medium might be required. I'll add the Medium results in the next day or two once I finish retesting. And once more as a quick overview, here's the hardware used for our Benchmarked articles:

Lords of the Fallen Average FPS

As far as target FPS for a decent experience, Lords of the Fallen isn't quite as twitch-heavy as some games, so I'd recommend shooting for anything above 40FPS average. If you have a G-SYNC display with an NVIDIA GPU, that will also allow you to still experience "smooth" gameplay without tearing. For our testing, however, we disable VSYNC as usual. 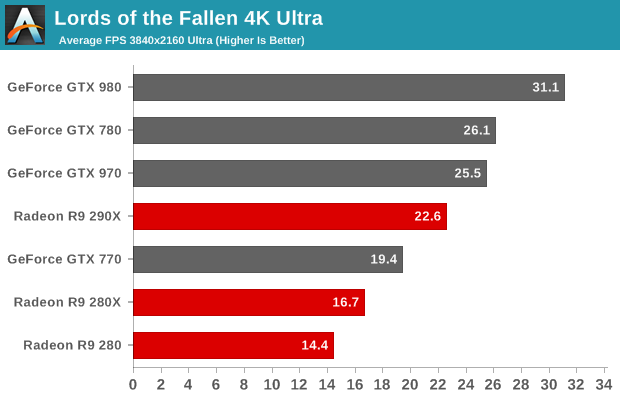 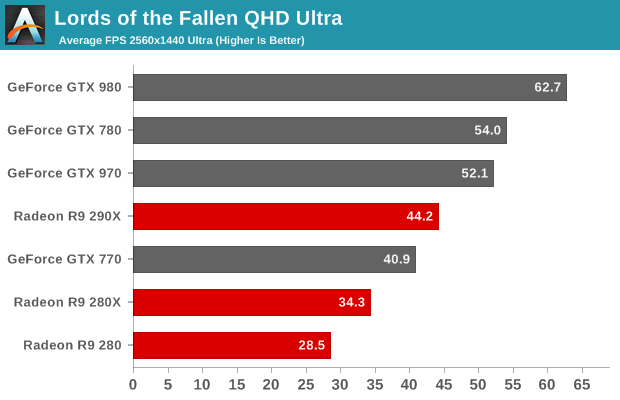 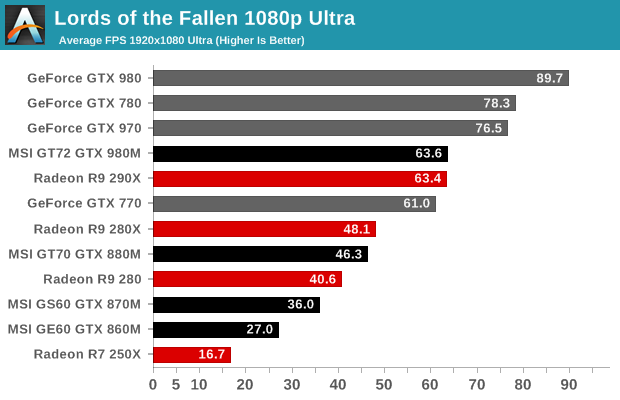 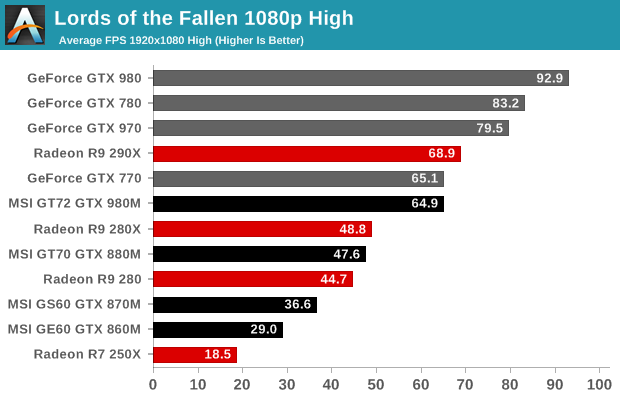 Starting with average frame rates, 4K is basically a stretch at best for even the fastest single GPU configurations. The GTX 980 can technically break 30FPS (barely), but it's not as smooth as I'd like so dropping down a notch is recommended. SLI reportedly works well, though I don't have the hardware to test this (yet), so two high-end NVIDIA GPUs might be enough to get into the playable frame rate territory at 4K. At present CrossFire R9 290X still falls well short, but that's also due to the fact that CrossFire scaling is very low right now.

There's a sizeable jump in performance going from 4K to QHD as expected, with most of the GPUs basically doubling their performance – not too surprising as 4K has 2.25X as many pixels to render as QHD. I mentioned earlier how the patch changed performance in some cases, particularly for GPUs with 2GB or less VRAM. The big beneficiary for higher performance GPUs ends up being the GTX 770, which saw a jump in QHD performance of over 70% with the patch (and a still significant increase of 30% at 1080p Ultra/High).

On the AMD side of the equation, the R9 GPUs don't do all that well compared to NVIDIA. We're used to seeing the 780/970 trade blows with the 290X in most games, but here the 290X is closer to a 770, with the 780/970 offering a solid 15-20% increase in performance. Meanwhile the 280X is mostly playable at QHD but certainly not ideal, and the 280 has to drop to 1080p before it can achieve "acceptable" performance. Overall, the R9 290X along with all of the GTX desktop GPUs I tested can handle QHD Ultra and provide a good experience.

Moving to the 1080p results and looking at the laptops, the GTX 980M is clearly a force to be reckoned with, essentially matching the R9 290X and the GTX 770 and easily handling 1080p Ultra. The next step down to the GTX 880M is a pretty big one – the 980M is about 35% faster than the 880M – but the 880M is still able to handle 1080p Ultra. The 870M meanwhile is in that "questionable" range, and dropping to High settings is only good for about 3-5% more performance on most of our GPUs, so a bit more tweaking is going to be required. Last but not least, the 860M falls short of even the 30FPS mark, and it will need some tuning or Medium quality before it's really acceptable at 1080p.

Lords of the Fallen Minimum FPS

As with Civilization: Beyond Earth, for the "minimum" FPS I'm actually using an average of the bottom 1% of frame rates. What that means is that this is a realistic look at minimum frame rates, as our benchmark run typically consists of a couple thousand frames of data so we're looking at an average of 20+ frames. Thus, a single frame that took a long time to render won't have as great of an impact as consistently low frame rates. The goal here is to give you a better idea of what performance will be like in the most graphically intense situations. 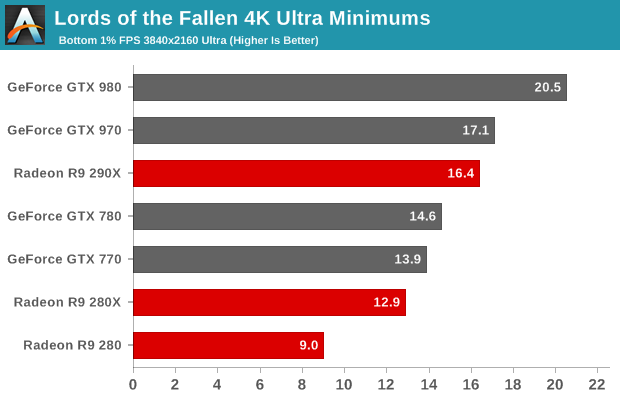 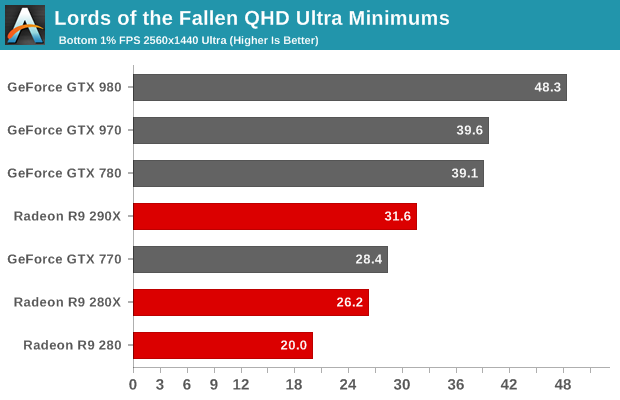 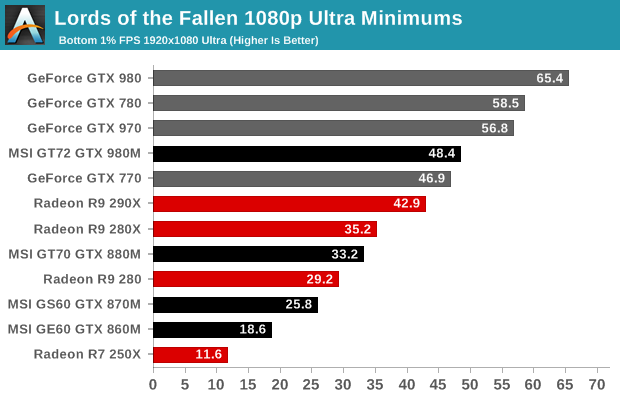 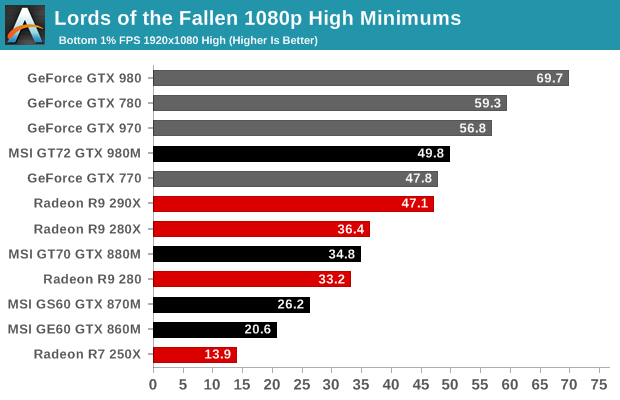 When we look at the minimum FPS, you can now see why I recommended at least 40FPS average frame rates for Lords of the Fallen to be "playable". That translates into minimum frame rates of roughly 30FPS, so even in higher complexity scenes the game will still stay reasonably smooth. On the other hand, if you're averaging closer to 30FPS, minimum FPS is going to drop into the low 20s, and that can be quite choppy.

The standings of the various GPUs don't really change much in our minimum FPS results. In most cases the minimum is around 70-75% of the average FPS, with GPUs that have less RAM generally faring slightly worse than those with more RAM. NVIDIA seems to do a bit better than AMD at 1080p than at QHD, but there aren't any clear issues on any of the GPUs.

I never played any of the Dark Souls games for whatever reason (lack of time, mostly), so for me Lords of the Fallen is actually pretty fun. Of course, having benchmarked the same sequence I don't know how many times (well over 100) does become rather tedious. With so many other games coming out right now, I don't think I'd place Lords of the Fallen at the top of any recommendations list, but it has enough to warrant picking it up if it goes on sale. In the meantime, I'd suggest Middle-Earth: Shadow of Mordor or Assassin's Creed: Unity as better games, at least in my opinion.

Now that we've had a few of these Benchmarked articles, let me also ask for reader feedback. The good thing about these Benchmarked articles is that once I'm done with the initial benchmarking, I won't necessarily be retesting this same game on different systems for another year or two. It's also useful to increase the number of games we benchmark, as it helps to keep the GPU manufacturers honest – they can't just optimize drivers for the ten or so games that most sites use for benchmarking as an example. But what do you think – do you like these articles? Short of the desire to test even more configurations (it's always something that would be nice to have but very time consuming to deliver), what else would you like to see? Are there any recently released games that you'd like to see us test? Let us know!