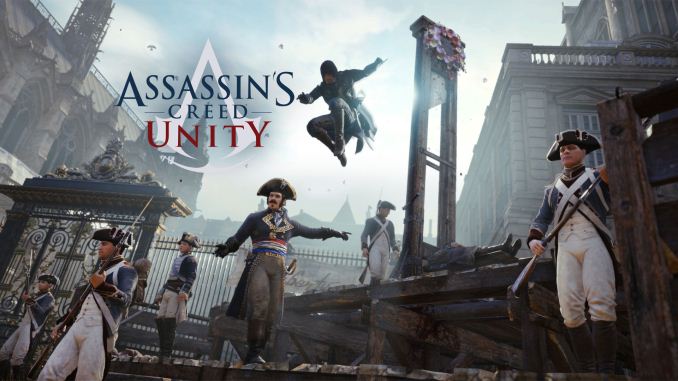 Similar to the last game we looked at, Lords of the Fallen, Assassin's Creed: Unity has had a bit of a rocky start with bugs and other issues needing to be ironed out. It also happens to be a very demanding game to run – at maximum quality, it will basically chew up any GPU you throw at it and spit out crispy bits of silicon. And it's not just GPUs that get eaten, as CPU power can have a substantial impact as well. Finally, and this is not necessarily correlated with the other items in this list, Assassin's Creed: Unity (ACU) is an NVIDIA "The Way It's Meant To Be Played" title, and it's also one of the notable games for NVIDIA's GameWorks toolset – ACU includes support for HBAO+, TXAA, PCSS, Tessellation (coming in a future patch), and now MFAA (which we looked at yesterday).

There's an interesting corollary to the above items that's worth getting out of the way: reviews of Assassin's Creed: Unity have so far been rather lackluster, with an overall average Metacritic score currently sitting at 70%. That's not particularly good for a series that has otherwise had good reviews – e.g. the last game, Black Flag, has an average score of 84%. Perhaps more telling is that the current average user review at Metacritic is an abysmal 2.1. Looking at the comments and reviews makes it abundantly clear that ACU tends to run like a slug on a lot of systems.

I think part of the problem is the mistaken idea that many gamers have that they should be able to max out most settings on games. Assassin's Creed has never been a particularly light series in terms of requirements, though at lower detail settings it was usually playable on a wide selection of hardware. With ACU, the requirements have basically shot up, especially for higher quality settings; at the same time, the rendering quality even at Low is still quite good, and Medium is enough that most users should be content with the way it looks. But if you want to run at High, Very High, or Ultra quality, you'd better be packing some serious GPU heat. The other part of the problem is that the game was likely pushed out the door for the Christmas shopping season before it was fully baked, but that happens every year it seems.

There's another element to the Assassin's Creed: Unity launch worth pointing out; this is a multi-platform release, coming out simultaneously on PC, PS4, and Xbox One. By dropping support for the PS3 and Xbox 360, Ubisoft has opened the doors to much higher quality settings, but the requirements may also be too high for a lot of PCs. With the new generation of consoles now sporting 8GB RAM, we've seen a large jump in resource requirements for textures in particular. I mentioned in the Lords of the Fallen article that GPUs with less than 4GB VRAM may need to opt for lower quality settings; with ACU (at least in the current state of patch 1.2), you can drop the "may" from that statement and just go in knowing full well that GPUs with 2GB RAM are going to struggle at times.