Logitech 2014 Switzerland Tech Day: The Hills Are Alive With The Sound Of Romer G

For most users who have discussed the multitude of peripherals on offer for PC users, Logitech is a name that features almost every time. I remember my G7 wireless mouse and G15 keyboard combination back in 2005-2006 when I was clan gaming, but Logitech’s history goes back way beyond this to some of the first early iterations of mouse design. As a result, Logitech is always on the periphery of discussions when it comes to building systems. In recent years however, Logitech’s focus has not always been obvious due to their splitting out into other segments such as audio and touch screen remote controls. That lack of focus has been examined internally and repurposed into targeting their core demographic. Now armed with their Logitech G brand for gaming for a number of quarters, Logitech invited influential media to their Daniel Borel Innovation Center in Lausanne, Switzerland, to get a taste of the company and their efforts moving forward. 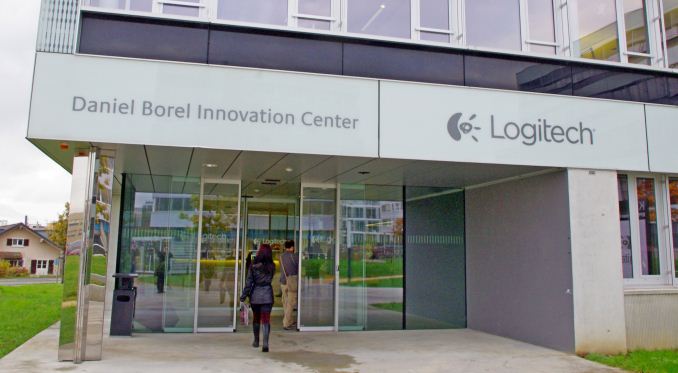 Whenever the media are invited to a tech day like this, it is usually derived from the need to tell a story (and promote products). Logitech has many angles for a story, but the one they want to promote is the ‘Win with Science’ ethos. As someone with background in scientific research, it makes complete sense to me to take this approach, although it does not tell the whole story when developing a product. But Logitech is perhaps in a better position than most on this front.

Logitech is highly integrated with EPFL, the École Polytechnique Fédérale de Lausanne, a top-20 university worldwide with a focus on engineering. This gives several distinct advantages. Firstly, access to engineers and professors to collaborate on research. This means, in part, cooperating with professors with research grant funding to analyze various concepts of human interaction or developing better ways for that interaction. Secondly, it gives them access to students who have grown up with Logitech, offering a different perspective having grown up with the company in their gaming life as well as new ideas. With these in hand, when new inventions are made, it allows Logitech to invest in cross-licensing deals with the patent holders and to work closely with them for new technology. Part of this is benefited from Logitech’s testing facilities, which became part of the tour. 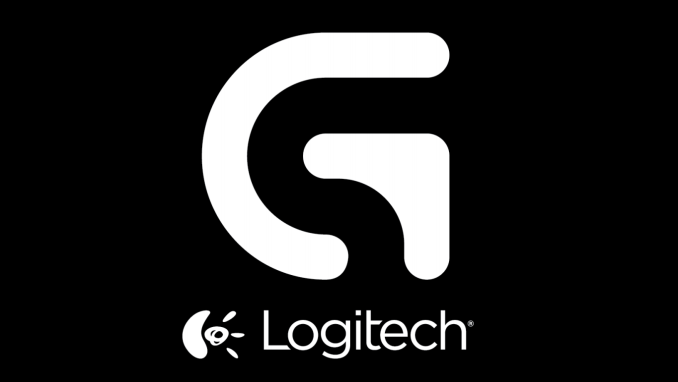 This mini-article from the event will cover two main topics – the tour, and the products.

Maxime Marini, the Senior Director of Engineering, Gaming and Retail Pointing Devices at Logitech, started the day recalling Logitech’s history and work ethic. We recorded the video here, where Mr. Marini described that the company was founded in a town called Apples, and this was one of their first mice designed in 1980/81: 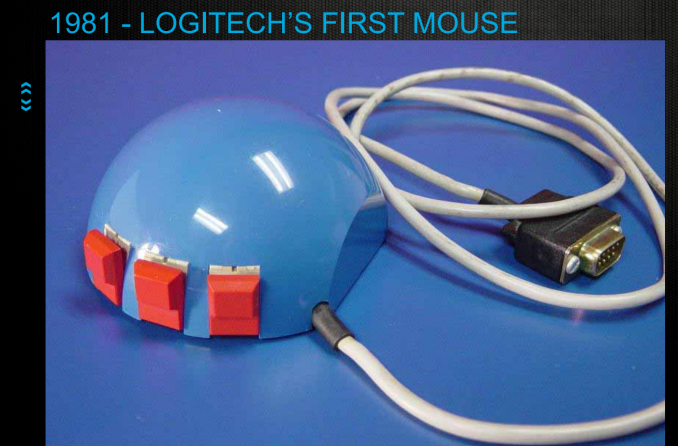 As mentioned earlier, part of the design process for Logitech involves bringing in students and gamers (see later) to discuss and help design the products. Insert obligatory ‘brainstorming’ interpretation: 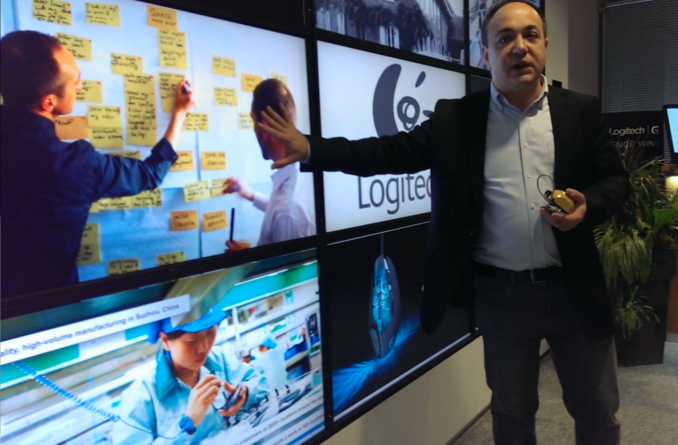 As part of the involvement with the EPFL, Logitech sponsor a biannual LAN event as an additional source of feedback on new designs and concepts. Part of what makes a company successful is the experience and design, hence Logitech’s goal of the day to talk to the media. Mr Marini also touched upon Logitech’s manufacturing, indicating that they own their own factory in China rather than outsource to existing companies. Mr Marini was based in Asia for 10 years with Logitech, spending time at the factory actually being hands on assembling the components and talking to line operators about process optimizations and product control. We were told that the factory in Suzhou produces 3 million products a week, shipping to over a hundred countries. I can imagine at a future date that Logitech might invite media to the factory itself in order to get an even closer look into this side of the business. 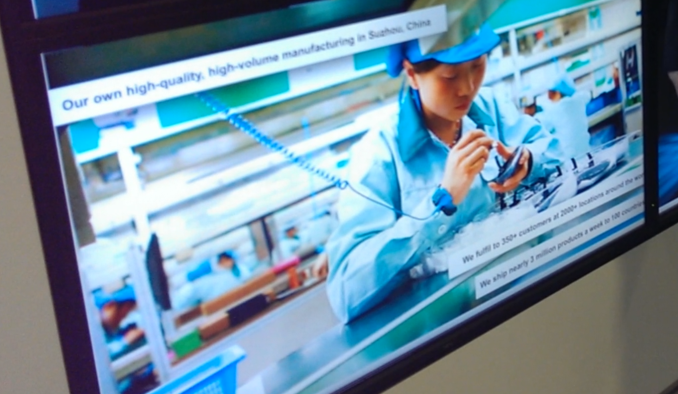 The focus of the day was more towards Logitech G, the gaming arm of Logitech. In a presentation by Vincent Tucker, the director of Research and Development at Logitech, he took us through the thought process behind the G range. Despite Logitech always being associated with a gaming range, over recent years they have moved into many different peripheral areas. 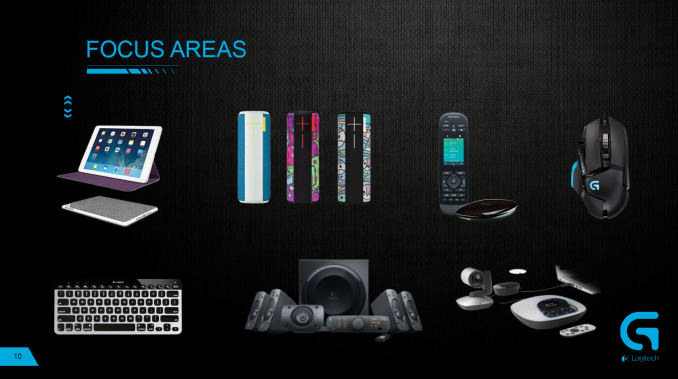 Some of these are areas hotly contested by bulk production companies in China, such as tablet folios and Bluetooth keyboards, but some require significant research such as audio and focused peripherals. The G branding is a refocus towards the gaming crowd, with the discussion of the day around mice and keyboards more so than audio. With this comes Logitech sponsoring professional gaming teams such as Cloud 9 and other LOL/Hearthstone players, which they had invited to the Tech Day for some Q&A and gaming later in the day. 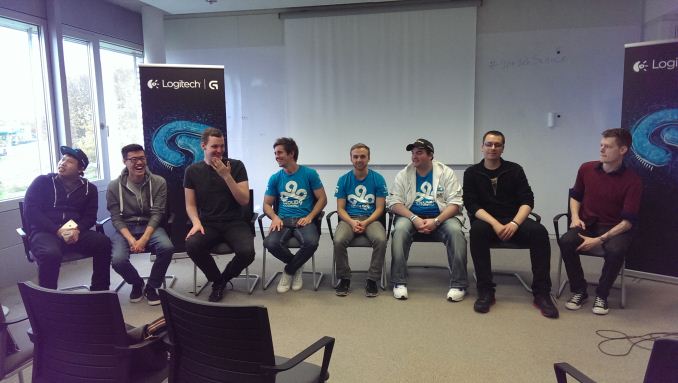 One of Logitech’s focuses is towards MOBA gaming (Multiplayer Online Battle Arena, or what we used to call Real Time Strategy but now controlling a single character rather than a god-view [thanks to Murloc for the context]) such as League of Legends (LoL) and Dota 2, as well as regular FPS and other genres. Mr Tucker described some of the processes that go towards designing a MOBA mouse, such as the G302 Daedalus Prime: 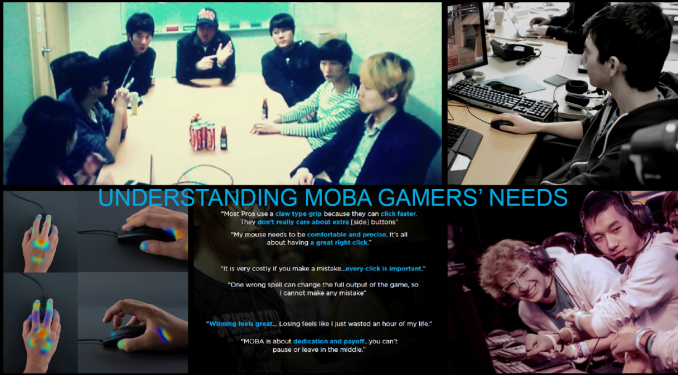 This includes analyzing where players need extra buttons, hand placement, grip type (claw vs. finger-tip) and the level of consistency in the clicking performance across a game.  We were shown diagrams of where parts of the hand exhibit more tension for different designs as an example of the type of research Logitech performs. For wired mice it also extends to the flexibility of the cable as well. One might argue that what is good for professional gamers might not necessarily be good for general users. When this question was presented to Logitech, they answered with reference to the wired cable - where professionals prefer something simple and flexible, whereas home gamers might prefer a braided design for longevity. 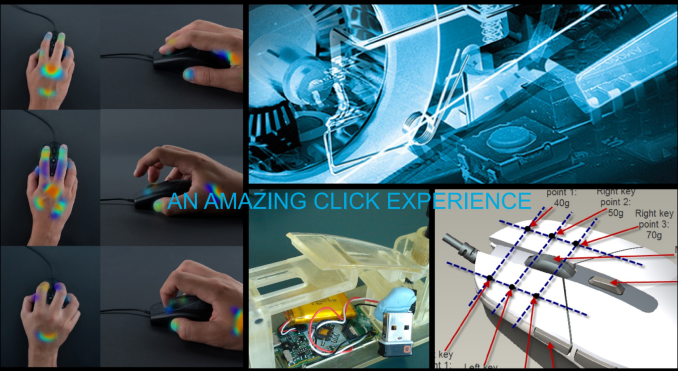 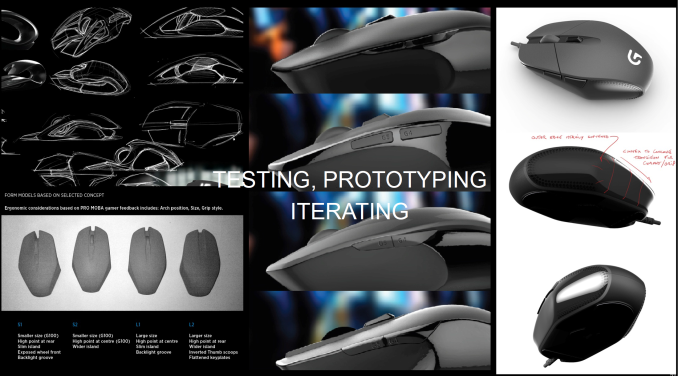 With the pro-gamers, we were told of the iterative design process, such as what is here above. This includes the arch position, the size of the device and even the materials used. Some gamers prefer a soft grip on the sides and hold onto their mouse tightly, whereas others keep a loose grip.

Along with function, in order for Logitech to produce a marketable product, there has to be an element of style to the device as a whole: 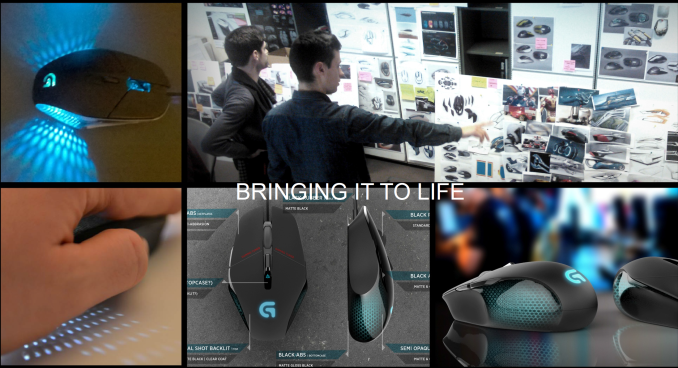 As part of the tour it was explained how even the presentation of the LEDs through parts of the device are modeled via ray tracing so the position of the LED can be optimized to give the glow desired.

As part of this R&D Talk, we were also introduced to the G910 Orion Spark keyboard. This keyboard was a major part of our tour, due to the new Romer G mechanical switches, but also due to the elements of design needed for it. 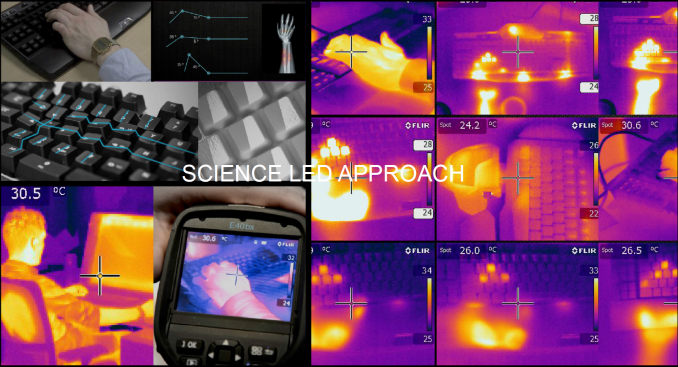 This means orientation of the keys (particularly WASD), wrist positions depending on the type of activity, and what looks like a lot of thermal imaging to see where the stresses of long-term gaming using the device can be reduced. 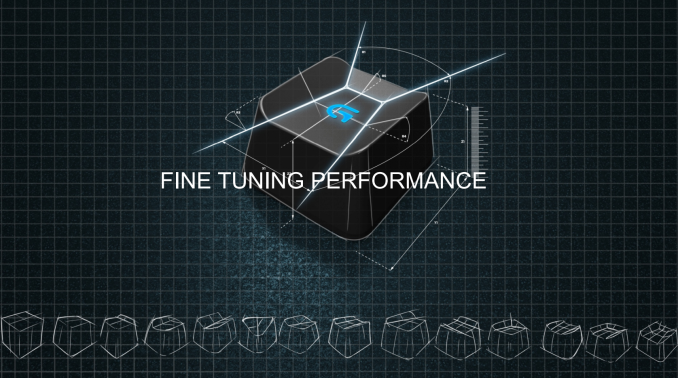 The shape of the keys on the G910 were also subject to research, whereby the angled design above allows gamers to slot their fingers into position easier, especially when they need to reach over for other keys away from their normal resting place. We were told that here is another point where professional gamers and regular users differ in preference – the regular users wanted a shallower dip into the key, whereas the professional gamers were happy either way. 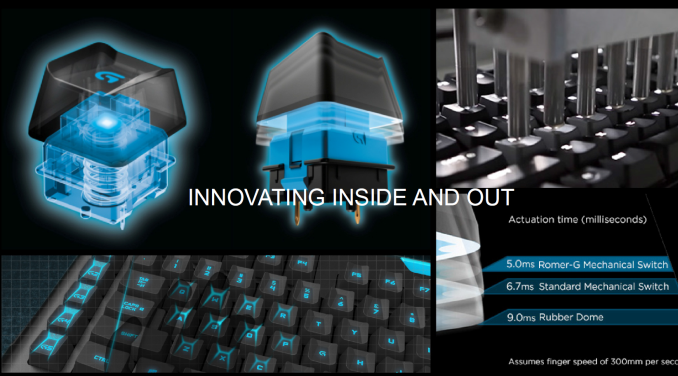 The Romer G switch is new for the G910 as well, being a mechanical switch similar to MX Browns but of Logitech’s own design, featuring a shorter actuation time due to the shallower actuation depth. The profile is almost identical to the Browns, requiring the same force, but narrower in terms of distance.

Aside from the force profile and the key shape, the Romer G key features a double redundancy for connection to the motherboard, a PMMA based lens for shining the LED and a Logitech designed cap. Similar to the mice, the Logitech key was designed via ray tracing to find the optimal placement for the LED and lens for full brightness coverage. This ends up being important for keyboards that have multiple characters per key but require an even brightness throughout. Overall these new keys are designed for 70 million presses each, and the fact that Logitech is the sole producer of these keys allows them to bin for accuracy and performance rather than buying batches from Cherry and binning those separately with no guarantee.

As part of the discussion we were also joined by Ujesh Desai, a veteral of marketing formerly from NVIDIA who recently took on a role at Logitech involving management, marketing and brand direction of the whole Logitech G ecosystem. 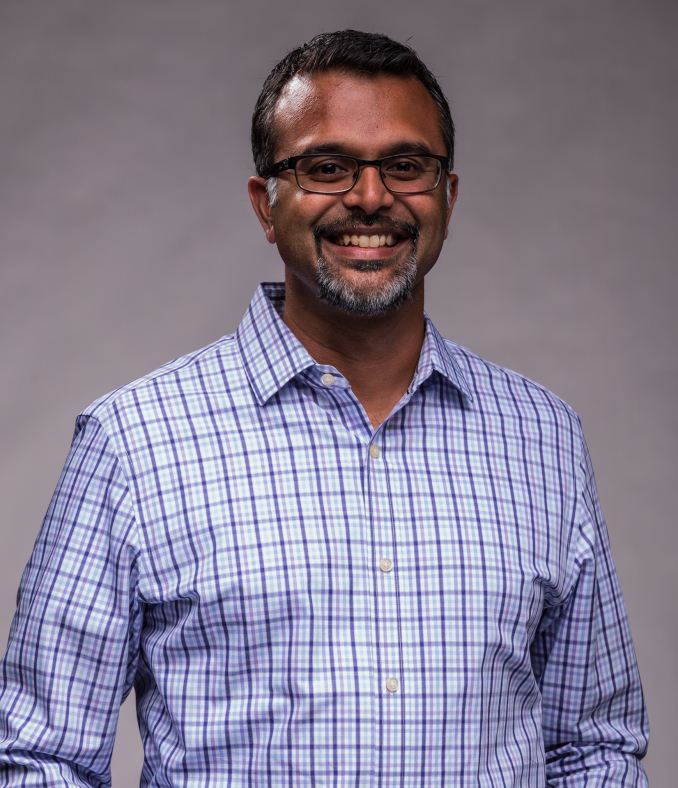 I spent a good while speaking with Mr Desai about the direction of Logitech and the importance of gaming. Despite only being in the job for a few weeks, he said that the interesting work dynamic between his old company and Logitech, and despite moving from inside the PC case to the outside there was still a focus towards the user and he is able to bring ideas to the table immediately.