Within each motherboard manufacturer, there is typically a design team for each market segment they are targeting, be that server, channel or gaming. Overclocking is slightly different as most manufacturers have an extreme overclocker or two directly employed to focus on the engineering and put their name to the product. Nick Shih, former world #1, is the overclocker behind ASRock's OC range and the newest member of this family, the ASRock X99 OC Formula, bears his signature. This is the board for our review today.

I previously lamented in our Z97 OC Formula review that ASRock had lost their sense of consistency. Sometimes they released the OC Formula as a cheap overclocking motherboard while at other times aiming at the super premium market. This meant speaking about the OC Formula range was tough, as the diagram encompassing the price points was so large and it depended specially on which chipset. Imagine if the next BMW M3 was launched for $20000 and acted like it, for example - it would be difficult to talk about the history of the product if it keeps jumping around in price point and feature set. For the X99 OC Formula, ASRock has priced the package at $330, in the middle of the range of X99 motherboard pricing. This is the first X99 OC Formula motherboard to market, and from testing it this past week or so it certainly comes across aas a mid-priced X99.

Functionally on the motherboard we get ASRock’s Conformal Coating which offers a water resistant (rather than superhydrophobic as we had said previously) surface on top of the onboard chips to allow rolling water to not affect operation. This has use in both high-humidity environments but more importantly for extreme overclockers where moisture can build up on the motherboard components. Last year at Computex I asked ASRock about his coating, and was told that it takes their machine in the factory about 20 minutes to coat each motherboard. Given the success of some of the OC Formula models, I would imagine they have several machines on the go all the time. 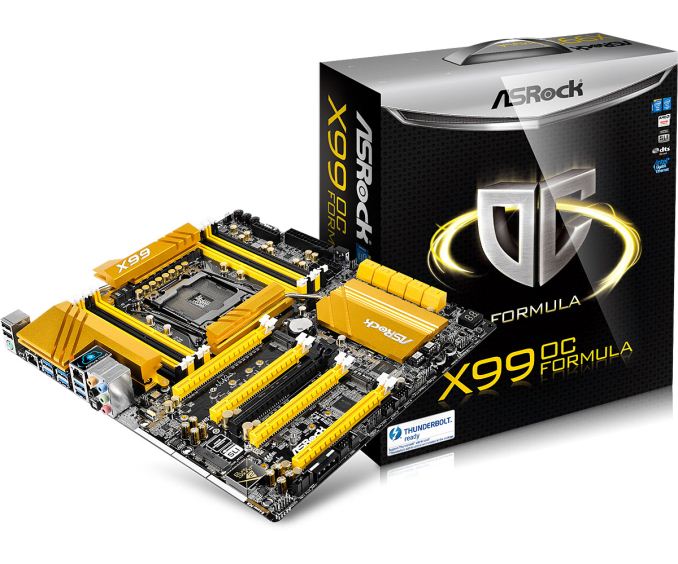 Aside from Conformal Coating, ASRock has equipped the motherboard with its XXL heatsink design, a 12-phase power delivery system with 60A chokes and long-life power filter caps. The socket, memory slots and PCIe slots are 15 micron gold coated (3x normal) to increase longevity and the board comes with a dozen temperature sensors to help system builders direct cooling. For usable functions, we get a full complement of SATA ports, four-way GPU support up to x8/x8/x8/x8, two M.2 slots with one using PCIe 3.0 x4 from the CPU and the other at PCIe 2.0 x4 from the chipset, a dual network interface (Intel and Atheros) and a total of 11 USB 3.0 ports including an onboard Type-A connector on the PCB. Overclockers can also exploit the voltage probe section as well as the Rapid OC buttons.

The biggest surprise in our benchmark settings was the power consumption of the X99 OC Formula under CPU load, giving 20W less than any other motherboard we have tested. This came down to the low stock voltage applied to our CPU. While our BIOS did not implement MultiCore Turbo by default, the auto overclock options up to 4.2 GHz worked and manual overclocking pushed our sample to 4.4 GHz. The ASRock set new records in our POST/boot time metric and performed as expected in the other benchmarks.

The overclocking market is a hard one to judge. We have several overclocking motherboards in for testing, and one might argue that with X99 being such a premium platform to begin with, users with enough green in their pocket will want to push the most expensive hardware even further. With X99 users have the option of going cheap (~$230) or expensive ($450+) with their motherboards and getting similar 24/7 overclocking results, so it would make sense that ASRock is aiming more at extreme overclockers going for records. Unless they come out with a super-formula type model, the OC Formula will sit at the top of ASRock’s stack competing against the X99S MPower and the X99-SOC Force. That is a tough crowd.

During my meeting with ASRock at Computex before the X99 launch, they were keen to promote features like their Super Alloy power delivery design and the XXL heatsinks. For the X99 OC Formula this comes as a 12-phase power design with 60A chokes, with the XXL heatsinks coming in four parts and covering part of the rear panel to increase both size and mass. Perhaps somewhat unfortunately these heatsinks are not all connected together, with ASRock instead going for two pairs of heatsinks joined. The one to the left of the socket and the one above the PCIe slots are not designed to cool anything in particular but to offer more potential surfaces on which to lose temperature based on the airflow. Given that this motherboard is aimed at extreme overclockers or water overclocking, airflow will not be such a big factor so larger heatsinks is most likely for the best. 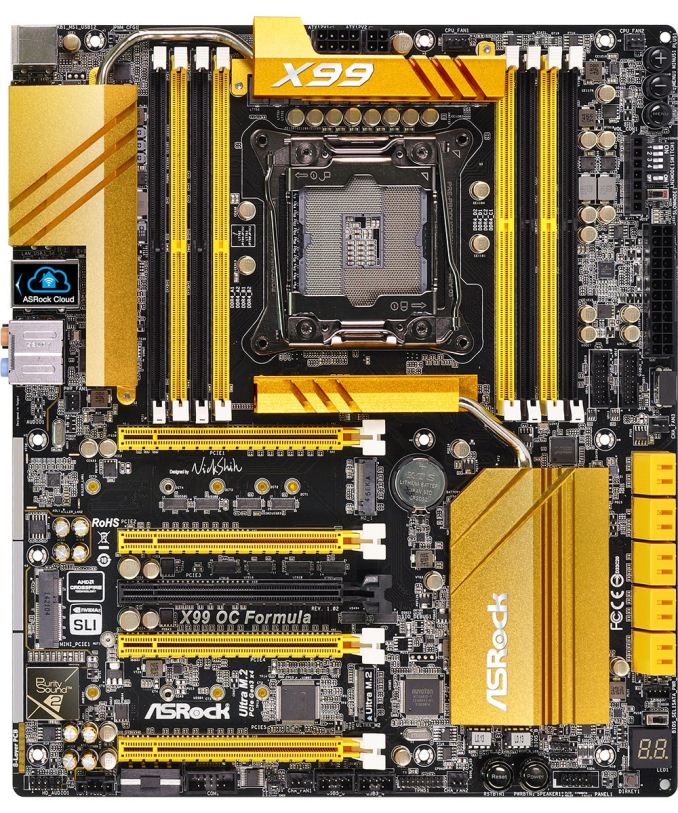 Despite the attempt for a yellow and black color scheme, I should point out that the whole motherboard looks very busy with additional components with the SMT white boxes around each. This detracts slightly from the design, especially when we compare this to something like the SLI PLUS which has a nice finish. I should point out that despite all the obvious components on the OC Formula, the Conformal Coating looks a lot better than the first time it was used, with it now covering more of the board. This is perhaps beneficial to the board in the sense that the socket area looks like it would be a bit of a pain to insulate for sub-zero overclocking.

The DRAM slots use single side latches, with the yellow and black slots having different end pieces to help ensure DRAM is placed in a consistent channel configuration. The socket area has access to four of the six fan headers on board – two CPU fan headers to the top right, a 3-pin header just above the SATA ports and another 3-pin header just below the rear panel. The final two headers are at the bottom of the board, one 4-pin and one 3-pin.

The top right of the motherboard is exceptionally busy with very little of the Sapphire Black PCB actually showing through. Here we get the Rapid OC buttons with a plus, a minus and a menu button. When the driver is installed in the OS, these buttons will adjust frequency or multiplier based on the menu setting. As an example of quick mid-benchmark adjustments, I find this a little slow to be honest. Next to this is a series of seven voltage probe points, along with a PCIe enable/disable switch and an LN2 mode switch. Beside the 24-pin ATX connector are two USB 3.0 ports, powered by the PCH via an ASMedia ASM1074 USB hub, and a USB 3.0 Type-A connector. This connector helps extreme overclockers to attach devices without having to reach around the CPU or GPU ports in order to retrieve scores from a system, or in 24/7 use it allows a user to keep a USB storage device attached when the system is in a case.

Below this is are the ten SATA ports with the first six being RAID capable and the final four are not, due to the dual AHCI controller nature of the PCH. Below this is a HDD Saver port, allowing the user to power two SATA drives from the motherboard and with the built-in software being able to power down these devices for longevity or to protect them from malware.

Along the bottom of the board is our two digit debug as well as power/reset buttons. With a fourth GPU installed these buttons are hard to push, and as a result it would explain why some other motherboard manufacturers move these to the top right of the motherboard. One feature I do like however is the Direct Key button in the bottom right because not only does it speed up our testing but it allows users to boot directly into the BIOS if they are testing an overclock out of the case.  Also along this bottom row we get a Thunderbolt header, a COM header, a TPM header, two USB 2.0 headers and the two fan headers previously mentioned. 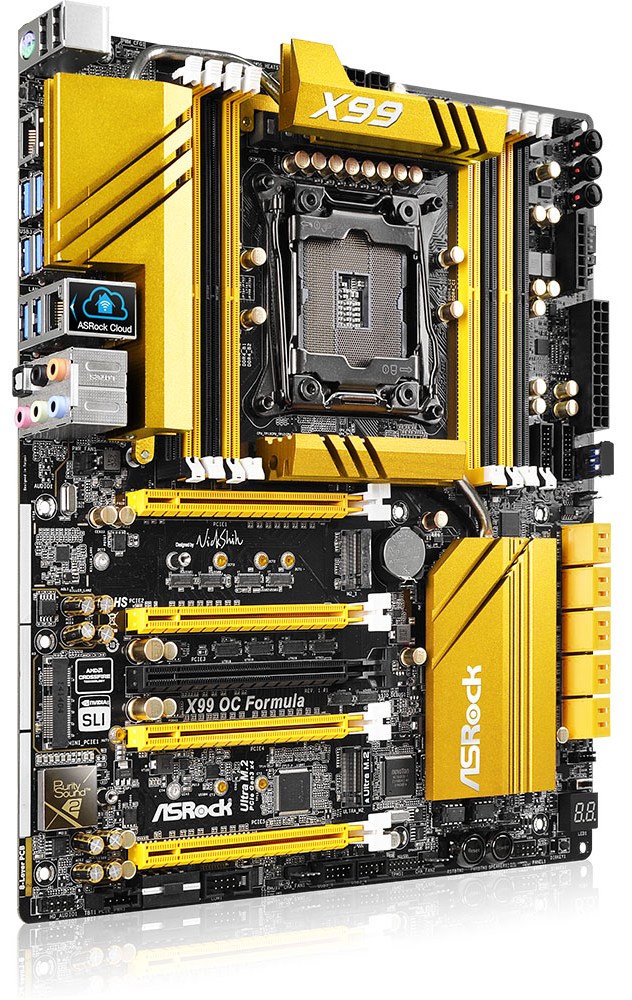 The PCIe layout gives x16, x16/x16, x16/x8/x8 and x8/x8/x8/x8, meaning that ASRock has not implemented additional timing circuits for a full-bandwidth situation similar to some of their competitors. Ultimately one could argue that this only affects three or four-way setups, and only for CPU-to-PCIe transfers which matter only at 4K and only one competitive benchmark requires 4K processing.  In the middle of these is an odd situation where this is a black PCIe 3.0 x8 slot which shares bandwidth with the Ultra M.2 x4 3.0 slot below it. This means that out of the 40 PCIe lanes offered by the OC Formula, usually as x16/x16/x8, the first two x16 PEG lanes are for the PCIe slots and the final x8 is used solely for the M.2 / PCIe 3.0 x8 slot. Note that these 8 lanes are not split – if the Ultra M.2 is in use, then the middle slot is disabled. When the 28-lane i7-5820K is installed, the bottom PCIe slot is disabled and the rest run in an x16/0/x4/x8/0 or x8/x8/x4/x8/0 configuration.

To the side of the PCIe slots is another interesting scenario where a mini-PCIe half-height slot is on the board, allowing users to implement mini-WiFi modules are other devices that can use this interface. This means that the enhanced Realtek ALC1150 audio solution used by ASRock has to squeeze in around this mini-PCIe interface in order to maintain PCB separation.

The rear panel of the OC Formula gives a combination PS/2 port, two USB 2.0 ports, four USB 3.0 ports from an ASMedia ASM1074 hub, two USB 3.0 ports from the PCH and audio jacks. The two network ports are such that the one on the left is the Intel I218-V, and the one above the USB 3.0 ports is the Atheros AR8171. The AR8171 is somewhat of an oddity in the motherboard space, as we only ever see ASRock use it on a few select motherboard models. After an email exchange with ASRock, this is because the AR8171 has features that enable their ASRock Home Cloud software, whereas the I218-V is unsupported for this.